We were off to Rome today with a  stopover at the town of Assisi, weren’t sure what to expect of this town since we didn’t research about it.

Things on the agenda were:

1. Visit the town of Assisi

First stop over was a town called Mercato Saraceno in the Italian region of Emilia-Romagna. We visited a cafe “La Cantena de non Osteria” run by three sisters who Clarisse our tour director knew personally. I guess this was a regular stop for Cosmos tours since we saw another tour group who were there already having their coffee. We were told we should maybe grab a sandwich to bring just in case we get hungry during the long drive or have something to eat before exploring the town of Assisi. Wifey and I got a baguette to share. There was an old dog that wandered around, quite friendly, walked really slow. We were worried for it when it crossed the road, lucky that there weren’t many cars travelling on it.

We reached the town of Assisi around 12:30pm. It was a lovely day, a little cloudy but the sun was out from time to time. The town was quite high up so you could see it from a distance, it looked like it had a fortress around it. It was the birthplace of St Francis of Assisi, a Catholic friar and the patron saint of animals and the environment. No wonder there were a lot of dogs there with the locals and tourists alike. We checked out the Basilica where St Francis was buried. No pictures allowed inside. The town was lovely on its own, cobblestone streets and houses, pot plants with flowers blooming filled the windows. The nuns who lived in these houses were very nice, waved at us smiling when we walked past. 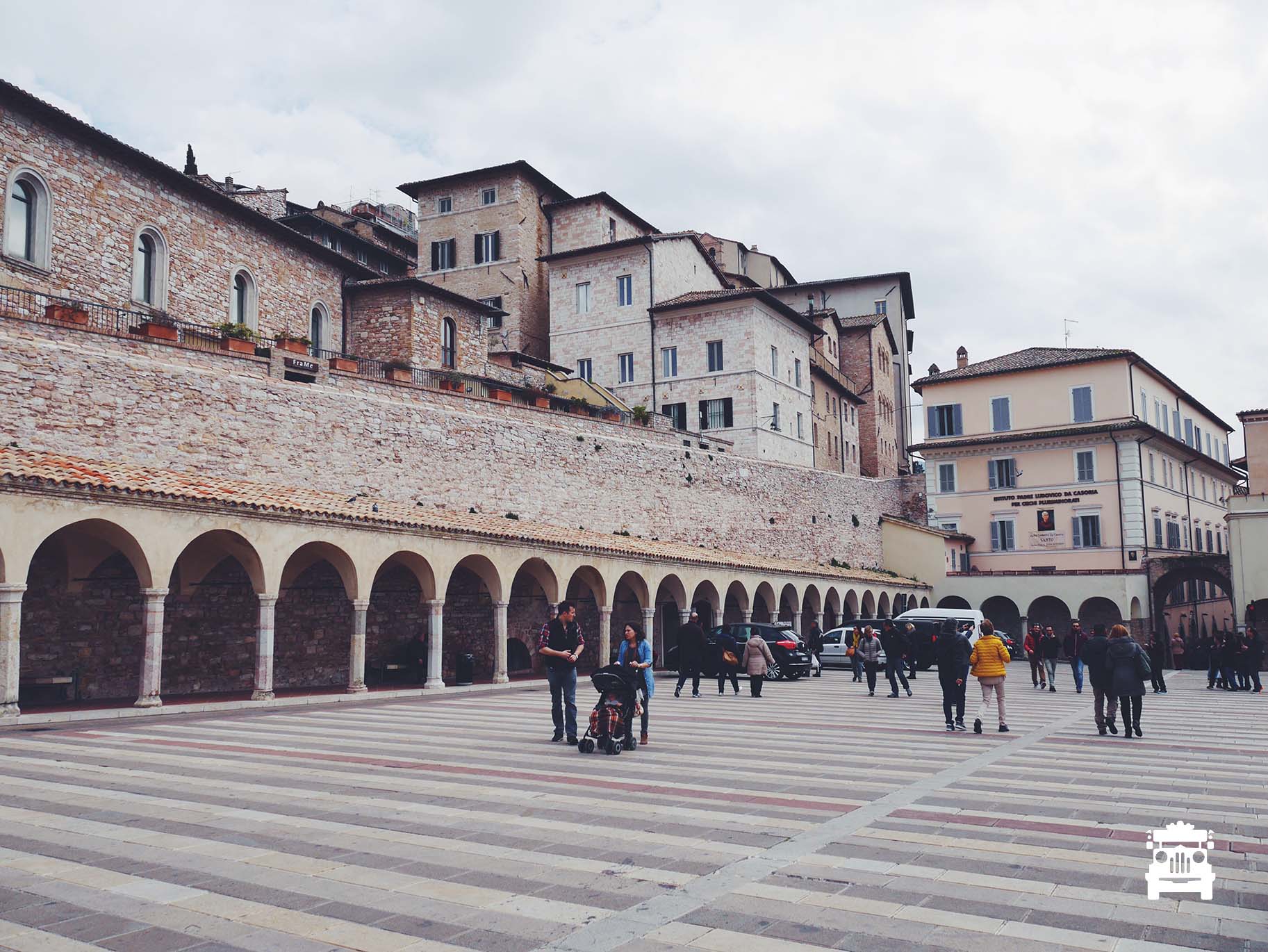 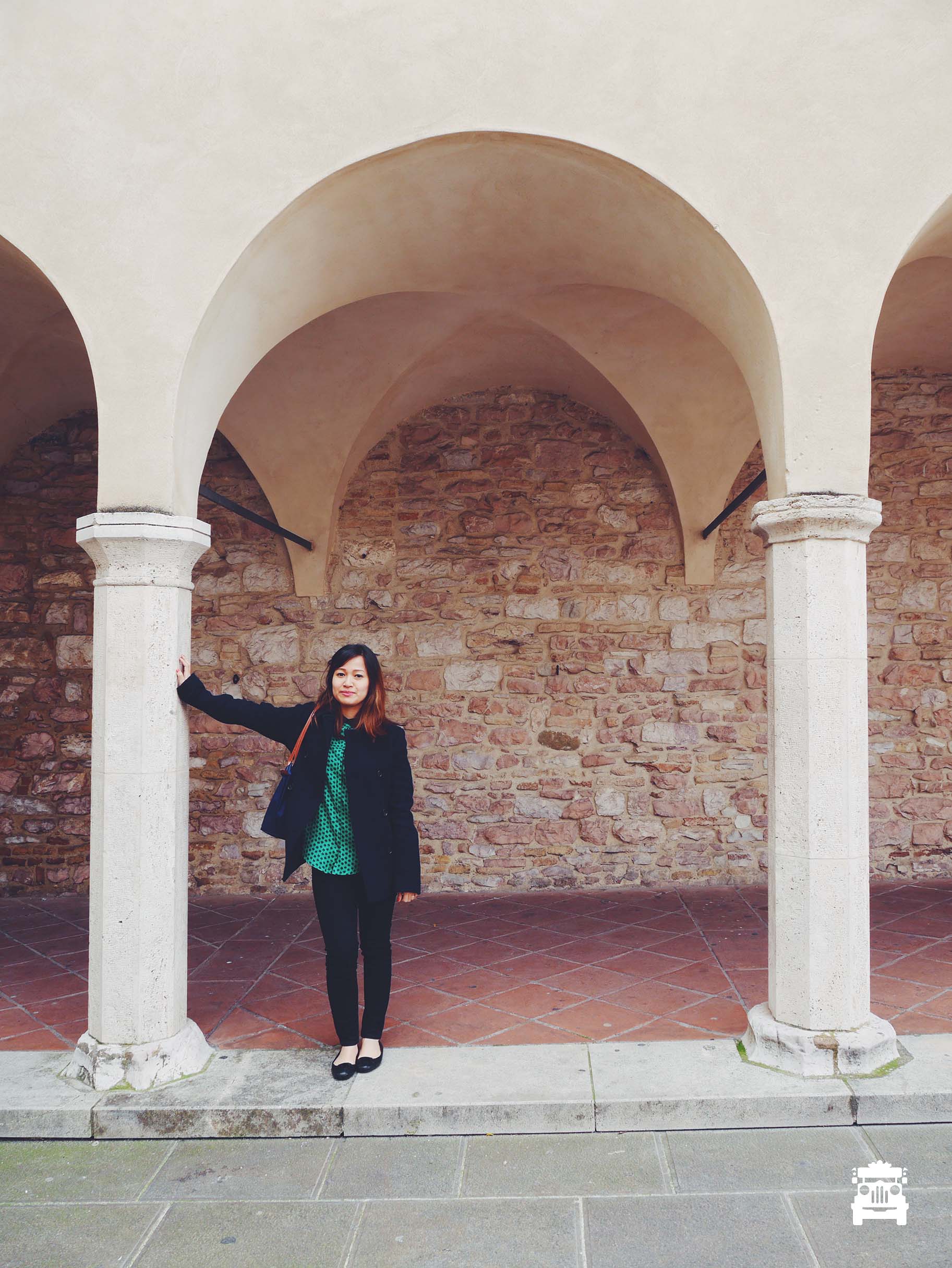 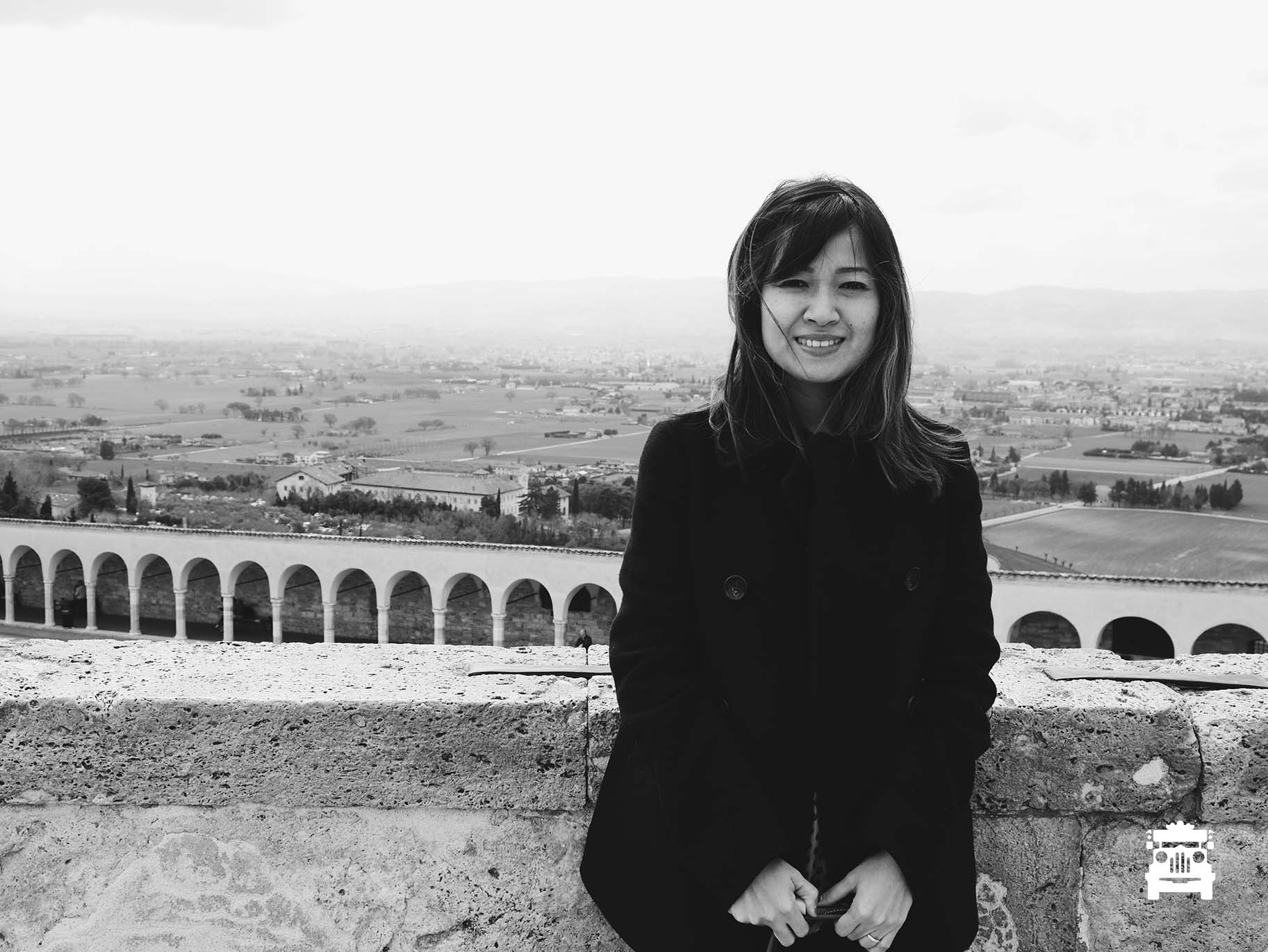 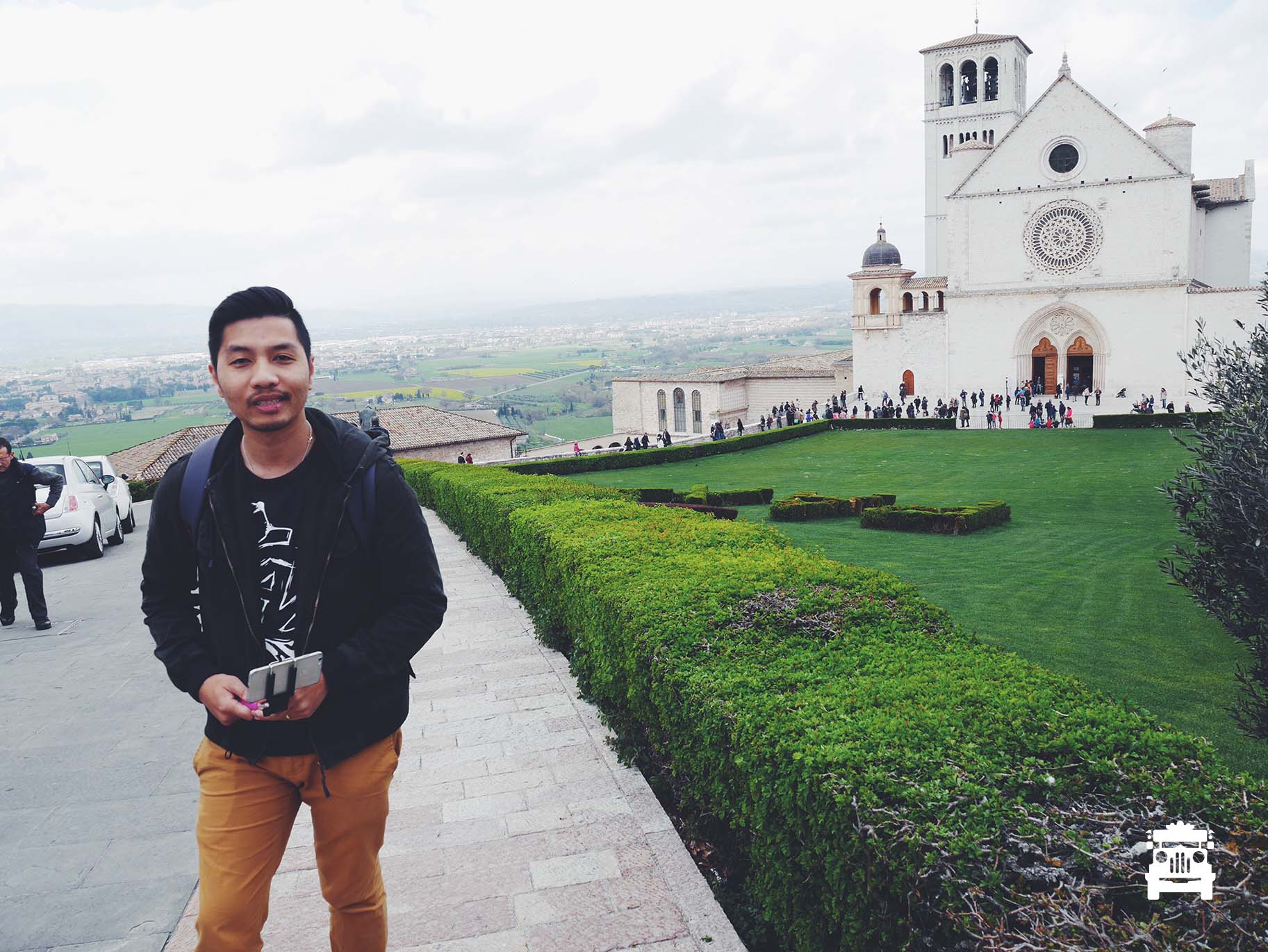 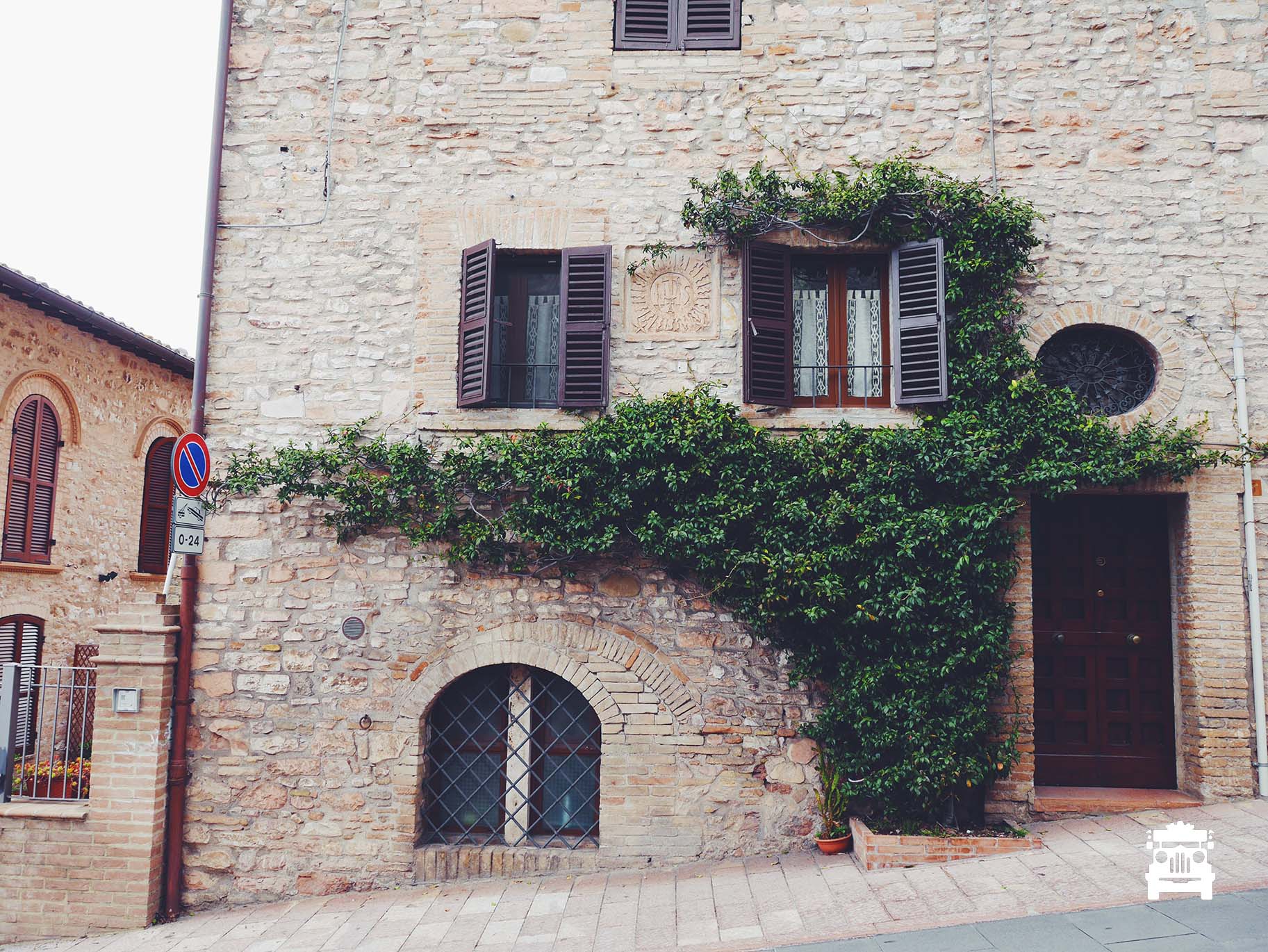 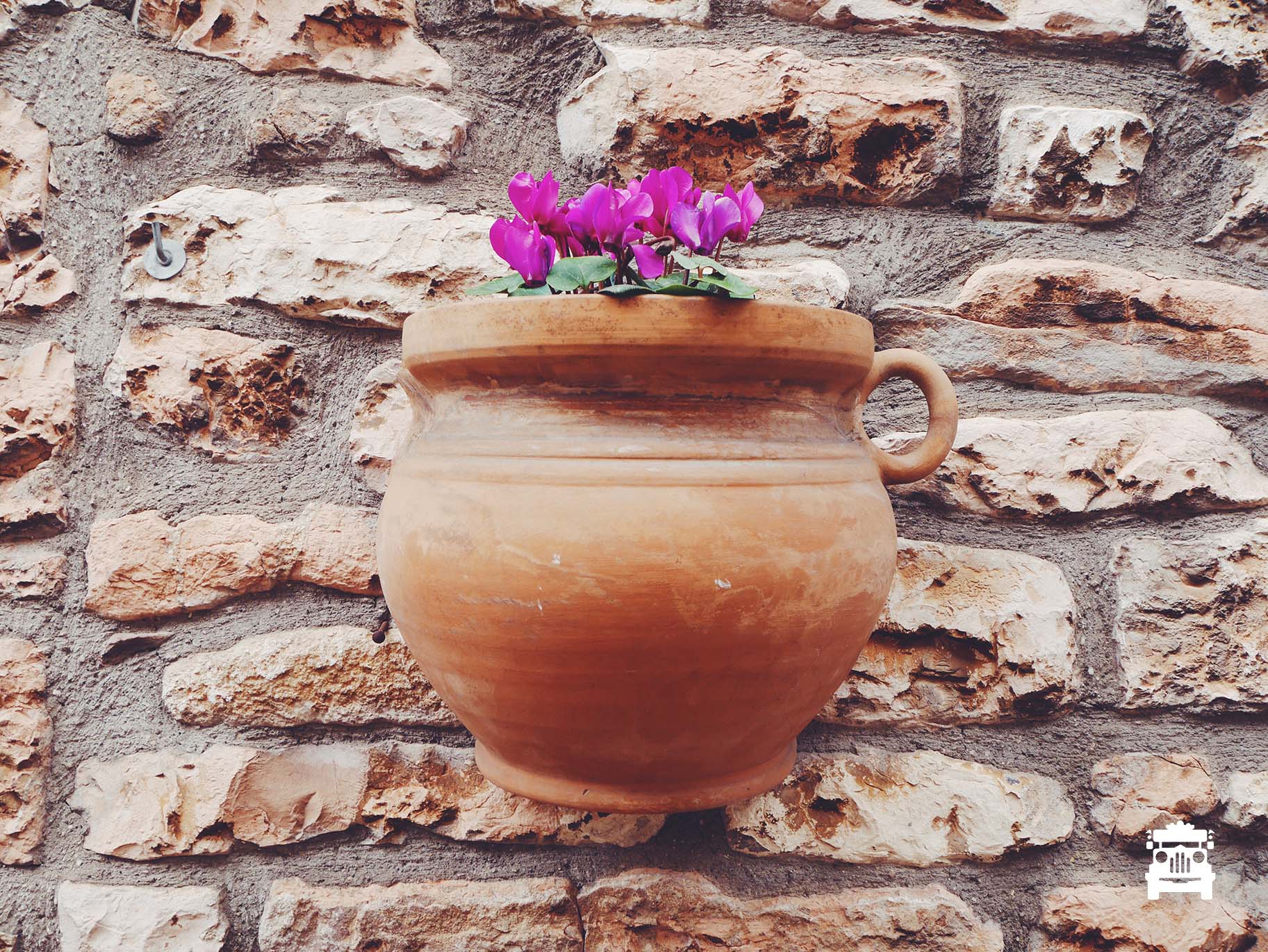 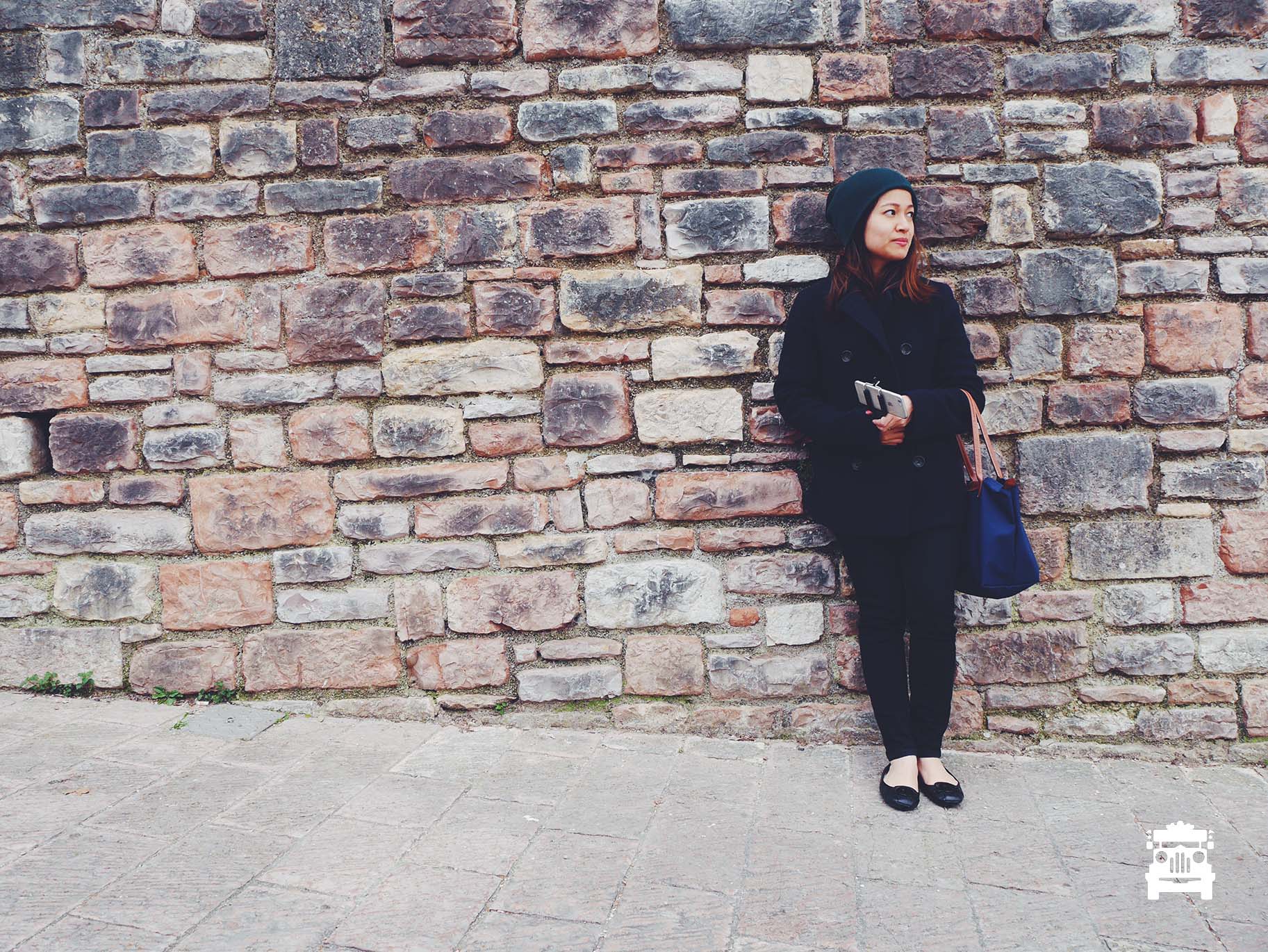 I wanted to explore the town more and so we kept going up higher and higher but eventually we decided to make our way down since we needed to go back to the bus. I would have loved to have explored this place a lot more. We stopped at a bench to eat our baguette and then proceeded to walk down to the bottom of the town. 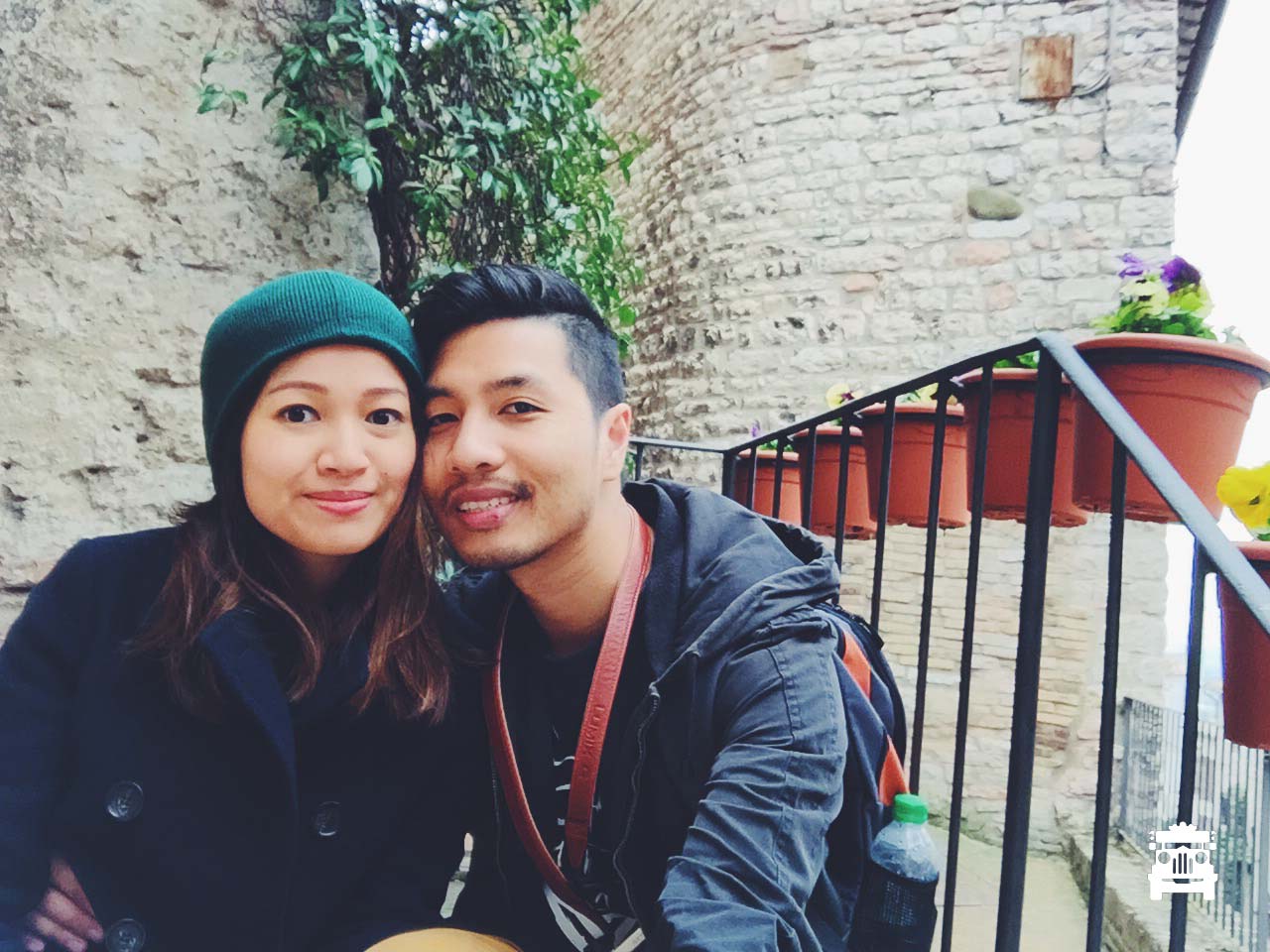 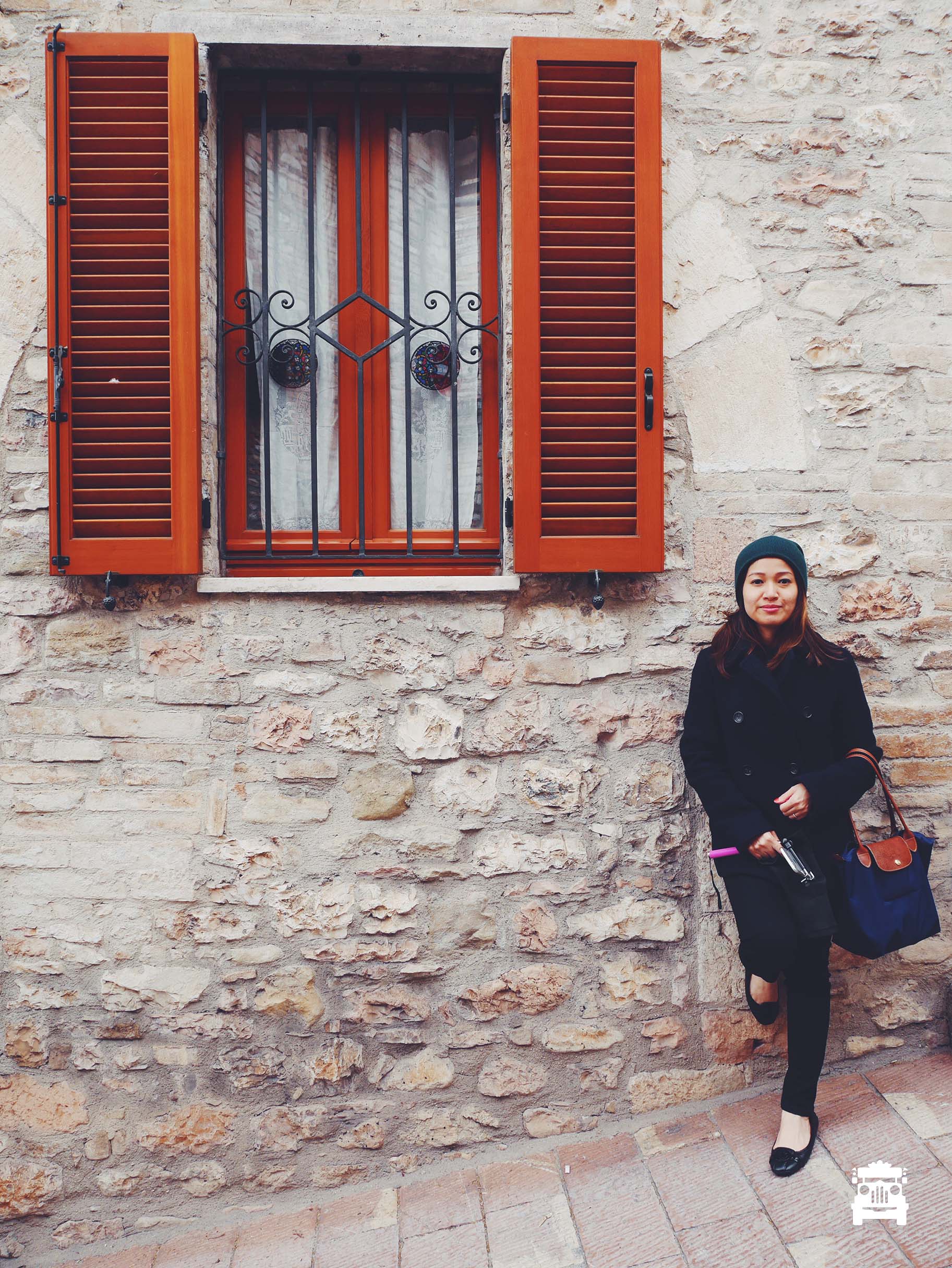 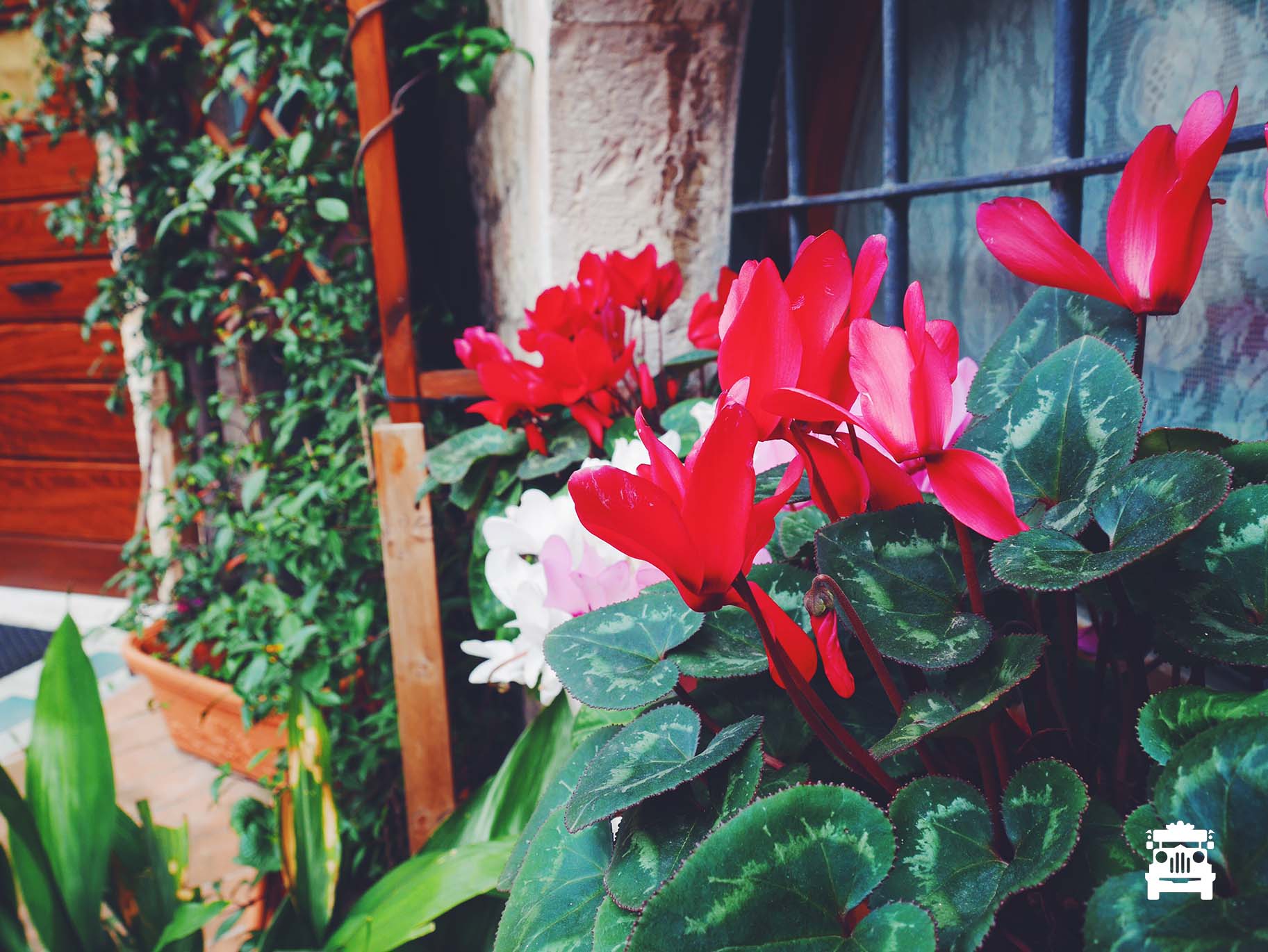 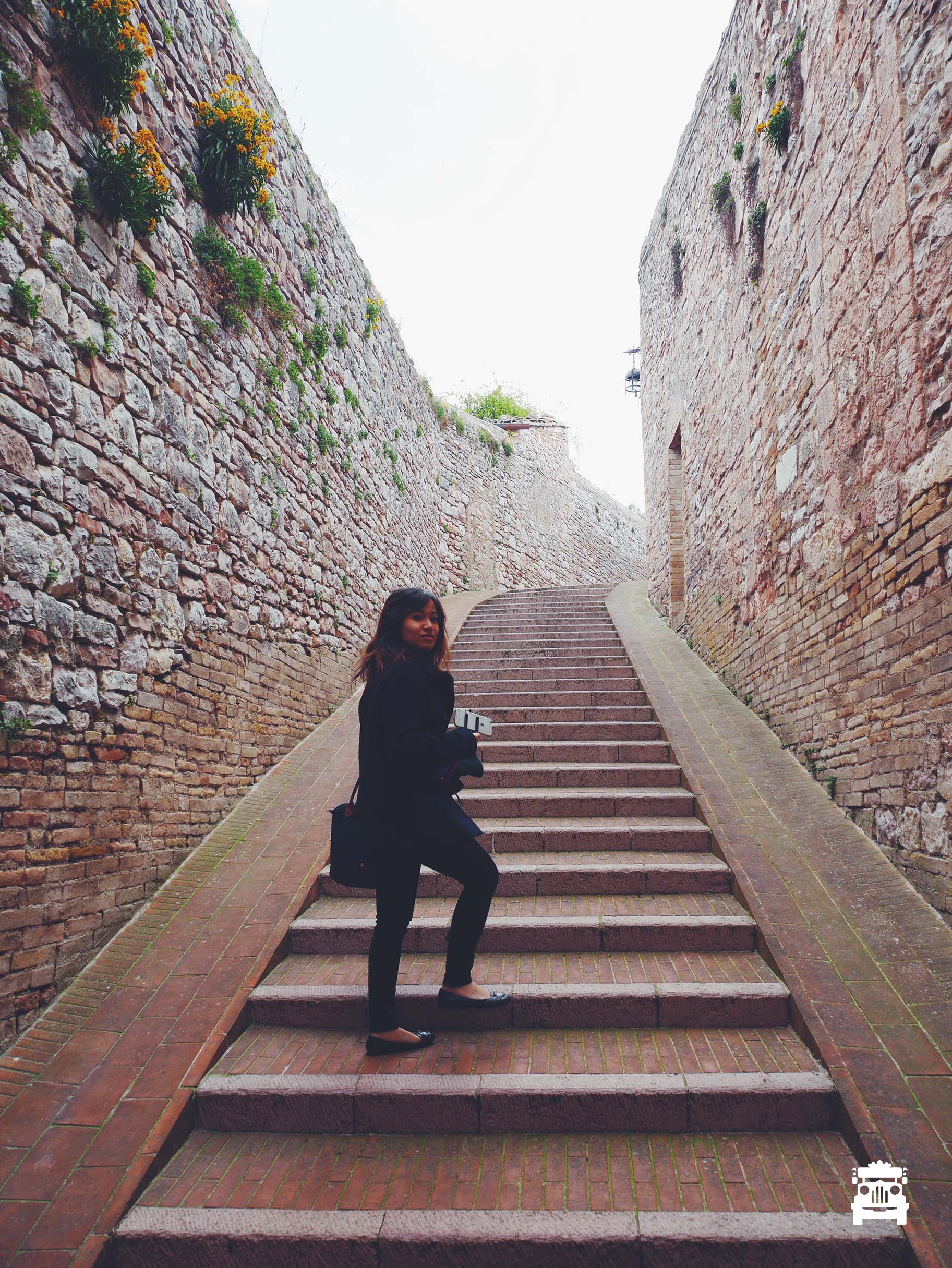 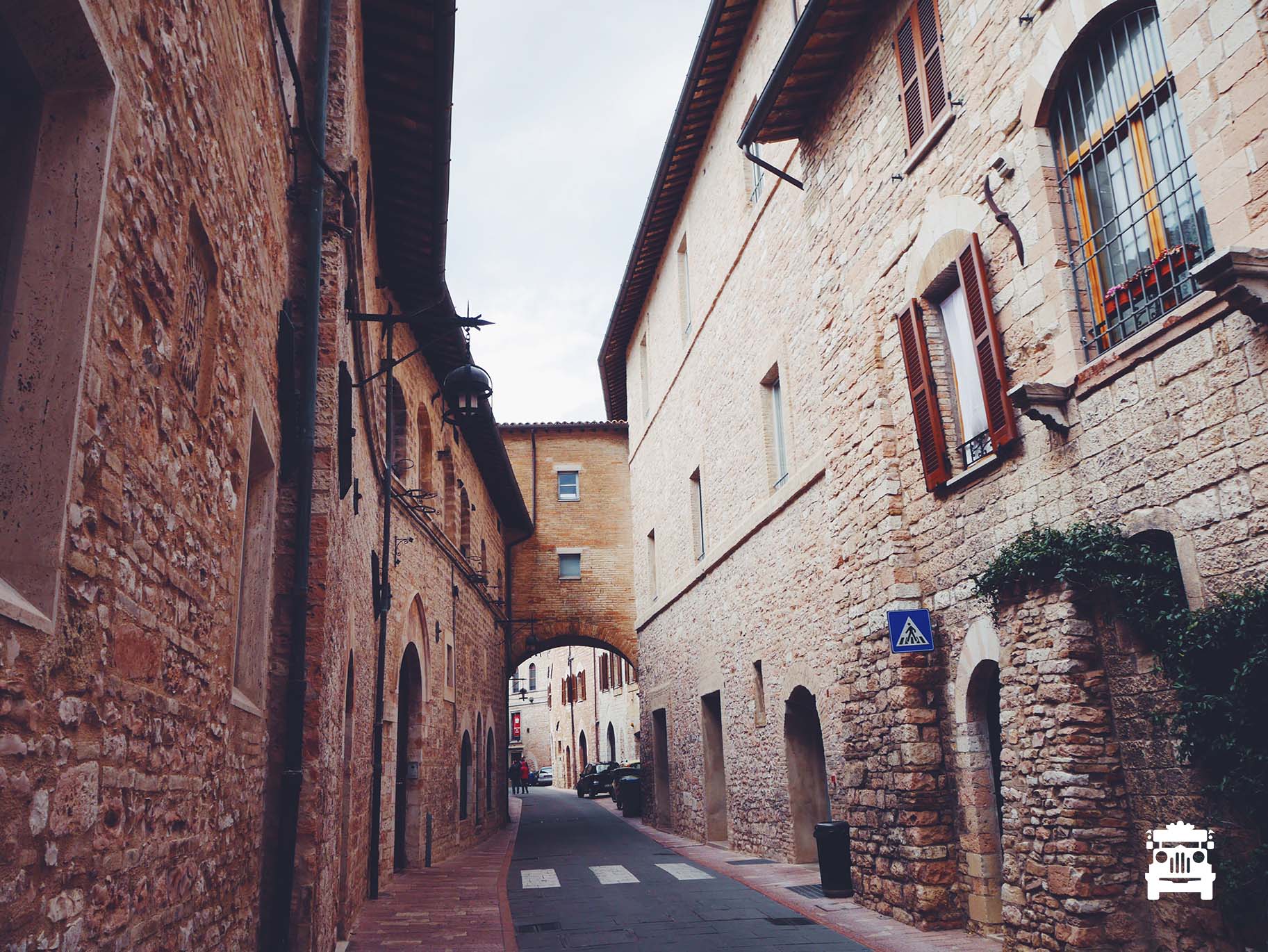 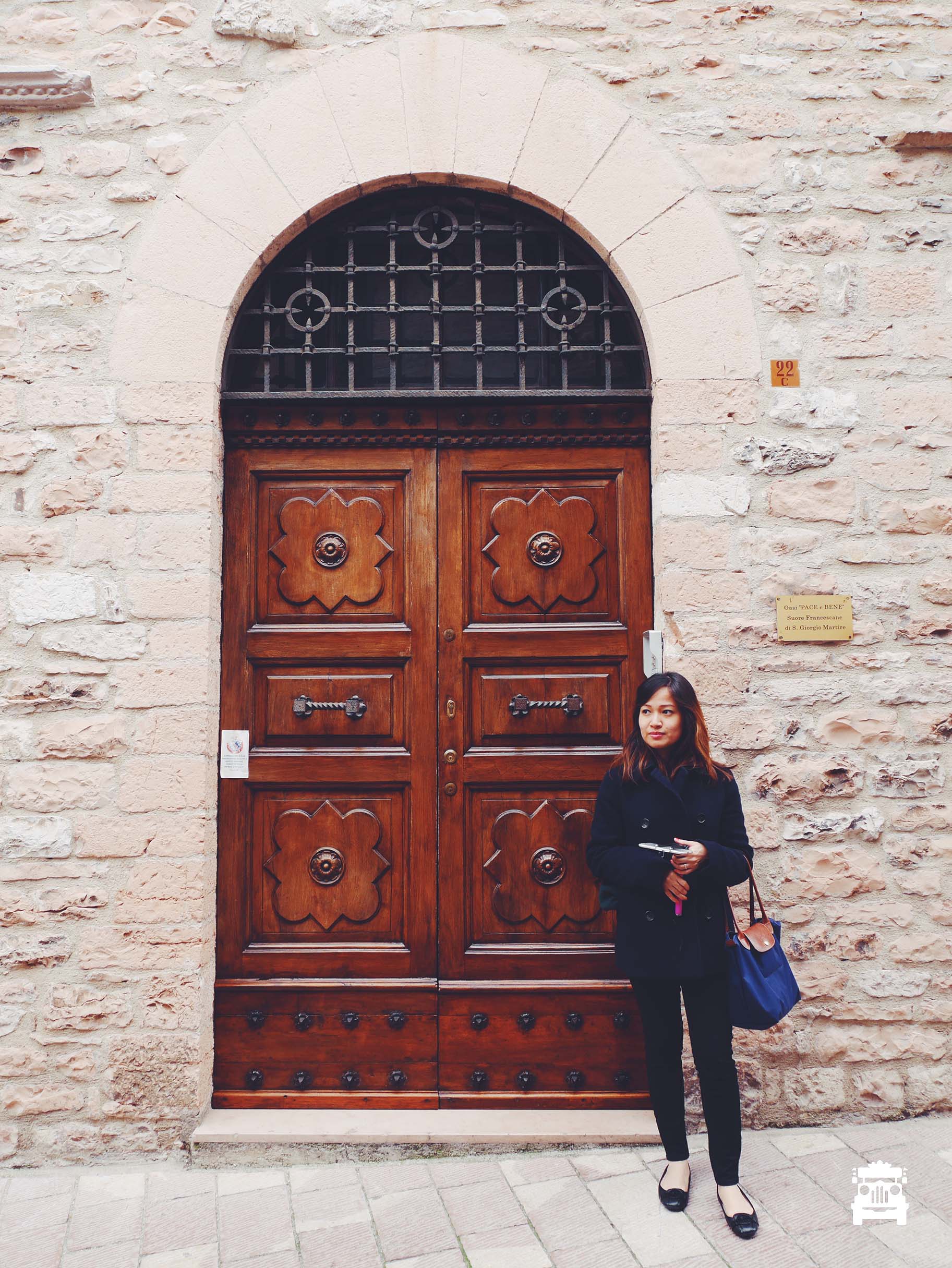 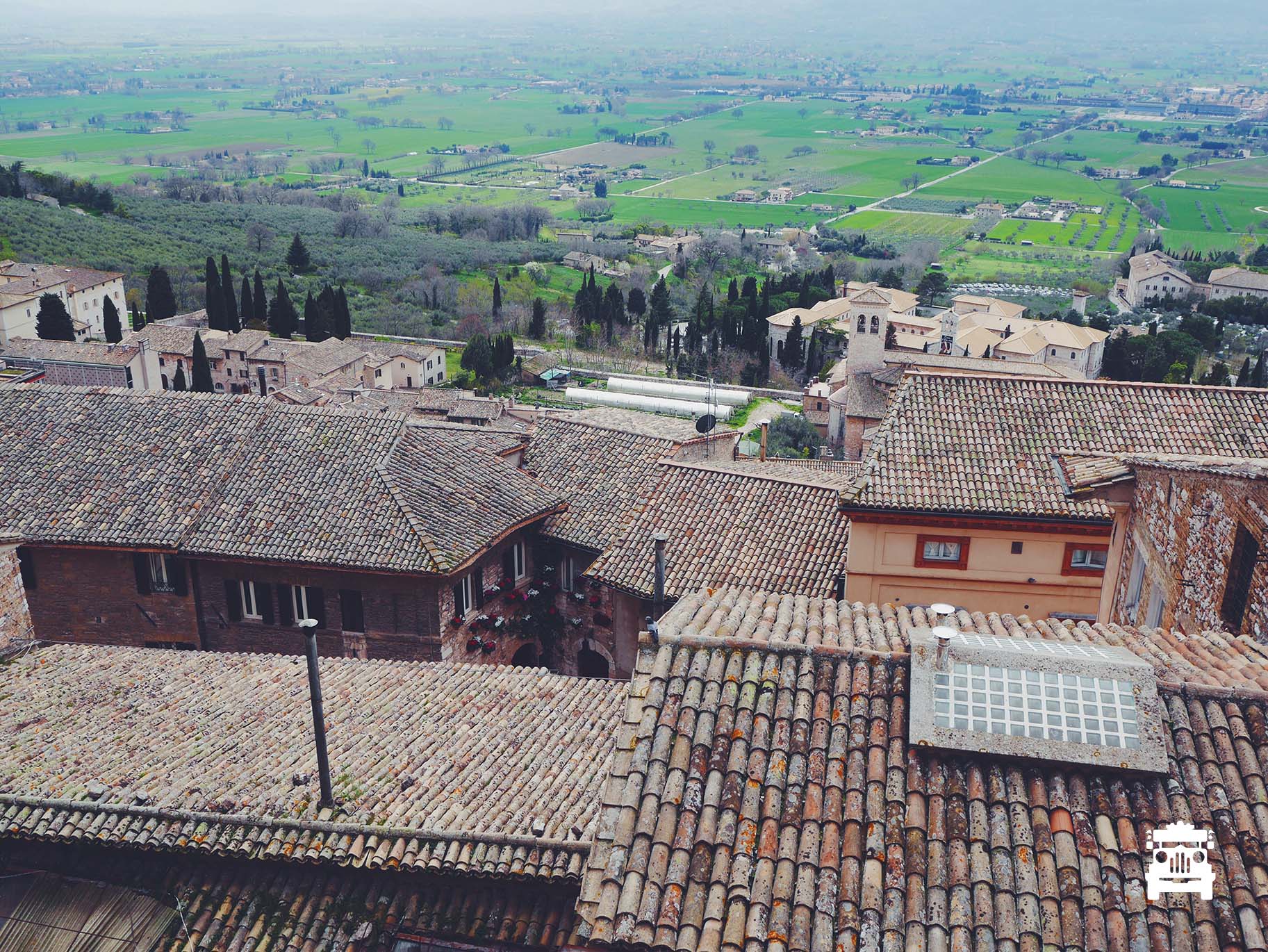 It was a few more hours until we reached Rome. First impression when we reached the outskirts was that it reminded me a little bit of Manila, a lot of apartments, a lot of cars, apparentlythe traffic would have been bad I f it weren’t for the Easter holidays. We reached our hotel, NH Villa Carpegna around 4:30pm. We had a couple of hours to rest then we were off for the group dinner in the city.

We were really looking forward to the dinner as we were also going to get a walking tour included. The night didn’t start too well since it started to rain before we even got to our restaurant. We didn’t bring an umbrella either :(. And so the only people without an umbrella (at least I had a jacket with a hoodie) we walked in the rain to our restaurant. The Italian restaurant was called (I’m still trying to remember, will update this when I do lol). The restaurant was cosy, we sat with the girls from our tour who were also from Melbourne and so our conversations were mainly about our lives back home. The dinner was four-course meal. First one came out, it was bruschetta with a slice of melon on the side? It was a little odd. The flavour combination was weird but pleasant. Second course was a serving of pasta. It was good but not the best pasta I’ve ever tasted. I guess being in Italy where the pasta originated from I was expecting to be wowed by the taste but did not. The two girls had the same comments. Next course, Wifey ordered the steak and I had the lasagne. Again, it was good but we weren’t impressed. The dessert was nice though, cherry gelato. We were seranaded by a flute player together with a man playing guitar. Then the waiters gave out yellow roses to all the ladies in the tour, some of them got a kiss on the cheek, Wifey however did not get one from them, she got one from me haha.

After the decent meal we walked out of the restaurant and the rain began to pour. And so we got back on the bus, we were quite drenched at this moment. We weren’t quite sure whether the walking tour would still go ahead but Clarisse decided that it will continue but will be shortened quite a bit due to the weather conditions. Our first stop was to see the Trevi fountain, since the bus could not get too close, we had to walk in the pouring rain. My wife didn’t really want to go but I managed to change her mind since it could be the only time we’ll get to see the fountain. She didn’t really want to walk in the rain as her leather slip ons would have been ruined by the water. Even though she wasn’t that happy to walk she still came with me, we bought an umbrella as we really needed it, it cost us €5 :S. The rain poured even harder and the streets were getting flooded, we reached the fountain and it was being renovated! You could hardly see anything, it had a barrier around it. All that walking in the rain for nothing. We walked back to the bus, Wifey was quite upset at this point but I assured her that we’ll get home soon and that I will help dry her shoes. We didn’t leave the bus at the next stop as we’d had enough of the rain that night.

It wasn’t the best start to seeing Rome, but we were still hoping for the best even though it was forecasted to rain the next day too.