It was going to be another hot day not just in Osaka but in Kyoto, our next destination on our second day in Japan. The plan to save my singlets for hot and humid Hong Kong was scratched. “Sun’s out, guns out”, I thought. Wifey carefully applied some sunscreen on Bub, enjoying the fact that she was wearing another short dress (her favourite!).

From Osaka Station, we caught the Special Rapid service train on the JR Kyoto Line which was covered by our pass. Bub fell asleep as she was rocked gently by the comfortable train ride. The chattering of two Japanese elderly women sitting in front of us didn’t bother her at all. I was too busy looking out the window as the landscape changed from urban to suburban and then to farming. The closer we got to Kyoto, the greener the view.

Half an hour flew by and before we knew it, we had reached Kyoto Station. Flashbacks from our first trip to Japan came rushing back. I could remember fumbling our way around Kyoto Station looking for the right platform and train line to get us to Arashiyama Bamboo Grove. This time, I was more prepared and knew exactly which train will lead us to our next stop, Fushimi Inari Shrine.

Stepping out of Inari Station, it was not hard to miss the giant vermillion torii gate towering the entrance to Fushimi Inari Shrine. Together with other eager tourists, we made our journey toward the shrine. It was only 10:30am yet we could already feel the heat from the sun. Upon reaching the entrance, a number of people congregated around the temizu water fountain and washing their hands as a way of “cleansing” themselves before entering. I had a shower that morning and so I skipped the ritual (I’m kidding).

As soon as we entered I knew we were somewhere special. I could sense the history just by looking around the shrine. “Where are the torii gates?”, I asked Wifey. She pointed toward the crowd making their way up some concrete steps. “We’ll have to leave the stroller behind”, I said. Looking within the grounds for a safe and secluded spot to leave the stroller didn’t take much effort as I spotted a tourist resting area where a handful of people sat down to cool off. I slid the folded stroller underneath a table in a corner, walked away hoping it would remain there upon return.

Carrying Bub in one arm and using the other to take photos proved very difficult in the beginning of the trail. Walking through the torii gates along with a crowd was another obstacle. Taking photos with the gates behind you without anyone walking in the frame was even harder. The further we walked, the less people we encountered and the steeper the trail became. Wifey stopped at one point deciding she would go no further and agreed to let me go exploring on my own. “I won’t take long, I just want to see what’s ahead”, I assured her. 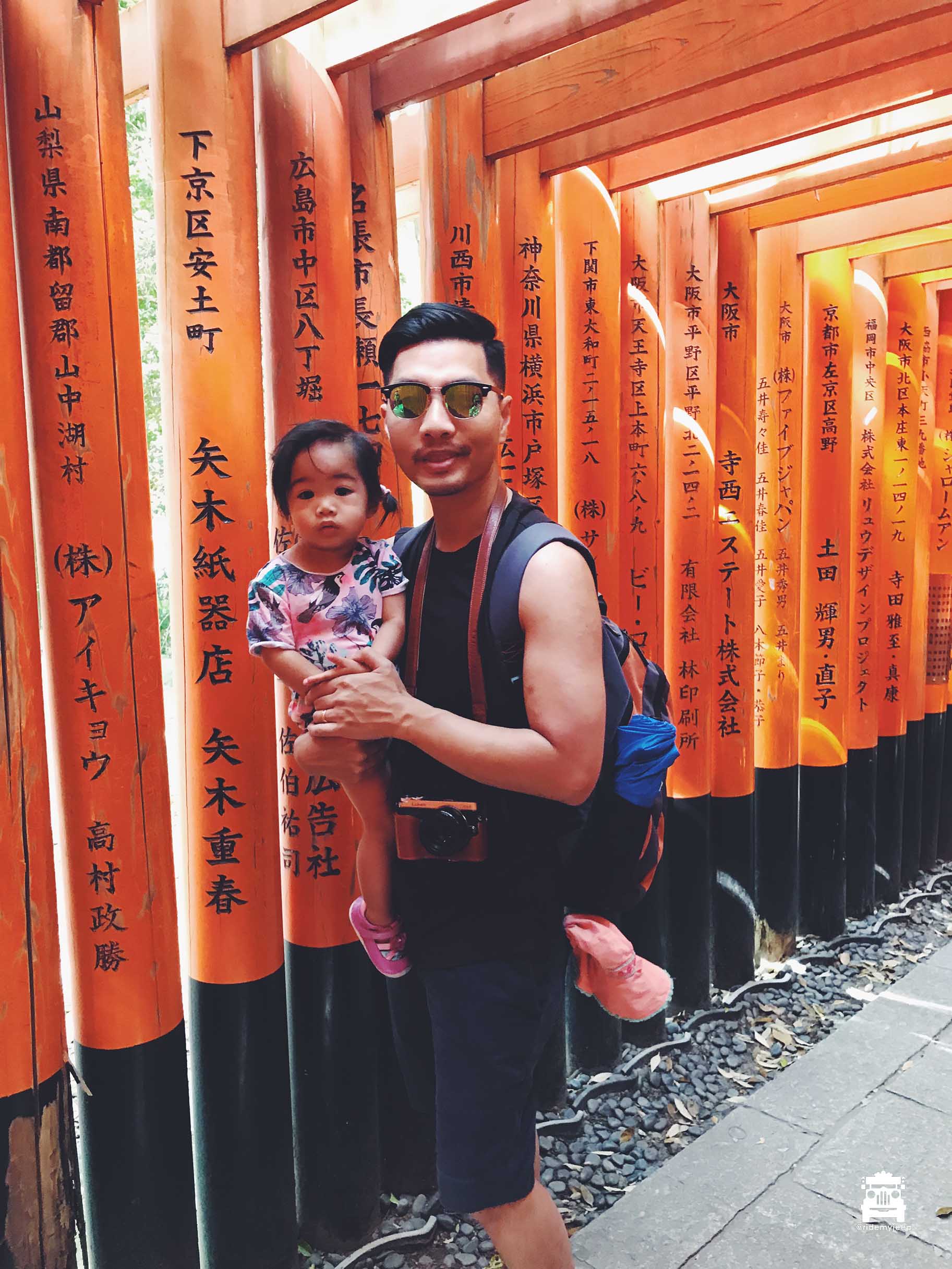 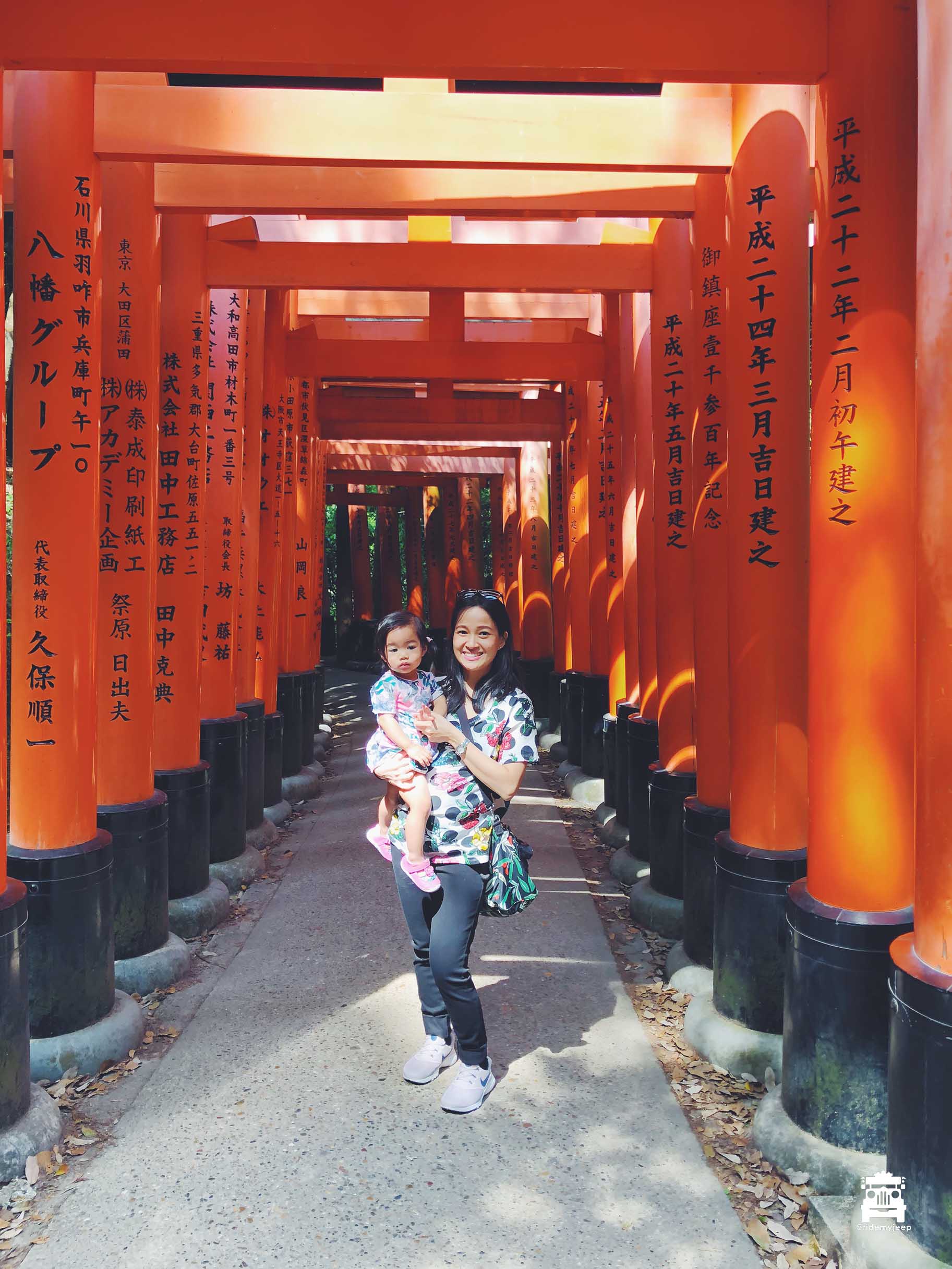 It was surreal, walking through the gates on my own. At times, it was quite peaceful. There was a section full of tiny shrines made of stones littered by fox statues. Foxes were known to be messengers of Inari, the Shinto god of rice which the shrines were dedicated to. After taking a few more photos, I headed back down to meet with my family.

As we walked around Kyoto Station looking for a place to eat for lunch, our stomach led us to the bottom floor of a department store. A number of food stalls with tantalising displays caught our attention. From fresh salads to skewered meat, there was an abundance of choice. Wifey bought some fried rice with dumplings and chicken karaage on the side that Bub rated average. She was more interested in eating the (pretty pricey) strawberries we purchased beforehand.

With her belly full of strawberry goodness, Bub was knocked out in her stroller as soon as we arrived in Gion. The heat was even more intense as we walked around looking for Hanami-koji Street to see the traditional machiya houses that Gion was known for. “Late’s take a break”, I said to Wifey as I pointed to some empty seats in front of a restaurant window. Across the road stood the entrance to Yakasa Shrine. As much as I wanted to explore it, I was more keen on seeing the machiya houses first. Bub was still asleep when Wifey was ready to go exploring again.

We were led to Hanami-koji Street by following ladies wearing kimonos. There were many of them, even men dressed up in “old-fashioned” attire as they strolled down the narrow street lined with machiya houses. The houses were tiny, made of wood and other traditional materials. These historical dwellings, many of which to my surprise were actual restaurants. From time to time, a car would drive pass which brought me back to the “present”.

At the end of the street, we stumbled upon Kenninji Temple, one of the oldest in Kyoto, constructed in 1202.

On our way back to the station, I could not resist a matcha soft serve at Kyo Cafe. Knowing I wouldn’t have to share with Bub who was still in deep slumber, I devoured the cone as quickly as I could just in case she woke up.

“I’m not sure if this is the right way out”, I questioned myself after coming out of the ticket gates at Osaka Station. We were heading towards Daimaru, a department store within the station which was nowhere near the exit that we had previously used the day before. I was determined to go the other way when I spotted a sign for the Pokemon Centre which got me excited all over. It was not in my itinerary however, we were not going to leave that station without showing it to Bub who was fully awake during our train ride from Kyoto.

“Pi-chu!”, she shouted upon seeing a cardboard cut out of Pikachu (hands down the most famous Pokemon). The centre had wall-to-wall plush toys and merchandise as far as the eyes could see. Bub excitedly grabbed anything she could reach, at one point holding two giant Pikachu plush toys at the same time.

Since Bub had refused to eat rice for lunch, we decided to look for another ramen place. Inside the arcade behind our hotel, we stumbled upon a “hole in a wall” restaurant, Kiou Butadon (we assumed this was the name). The signboard showed a big image of a butadon or pork bowl dish, layers of caramelised pork over rice. They also had ramen in their menu and so we entered without hesitation. There were no tables or booths instead there was a long bench in front of the kitchen and a line of bar stools for seating. We were the only customers and so we didn’t feel cramped at all. The chef kindly provided us with an English menu upon request though we already knew what we were going to order. One special butadon and a serving of their chashu pork ramen.

Not long after ordering and the dishes were placed in front of us. We were also given a kid’s plate and cutlery, a thoughtful gesture. At first sip of the soup, I knew we were onto a winner. The flavour of the ramen was bold, a little thick which was my preference. As soon as I had cooled a portion of ramen, Bub was all over it. She was loving it too. The butadon was salty and a little sweet, the charring of the pork with the torch elevated its flavour even more. 4 and a half stars.

After a sumptuous early dinner, we headed back to our hotel. Freshly showered and ready for bed, I looked at the time and realised it was too early to sleep. Bub was still full of energy, showing no signs of sleepiness. “Let’s go out for dessert?”, Wifey recommended.

The night was warm. Streets still full of people darting from every direction. The city was alive. Neon signs lit up the alleyways. We headed down some steps in Sonezaki that led us to the underground which was even more busier than above. Restaurants were full, stores were buzzing with action. Cafe de Champagne drew us in by the matcha crepes (couldn’t get enough of matcha flavour in Japan!) displayed in their menu. As soon as we got in, we are asked by the server “Smoking or non-smoking?”. Both Wifey and I were taken aback. “Non-smoking?”. It was the first time we had visited a restaurant in Japan that had asked us this question. There were a few people already puffing their cigarettes in the smoking area, and from the first table that we were led to we could still smell it and so we asked the server if we could move to the table closer to the open door. We did have Bub with us after all.

The matcha crepes came with a crème brûlée and a slice of pear and berry pie. “Straw-bi!”, Bub shouted. I had a go at cracking the thin caramelised sugar on top of the brûlée. Right underneath was the creamy custard. I put a spoonful in my mouth and the smooth, velvety cream just melted in my mouth. The berries were quite sour which complemented the sweetness of the crepes. It was a sweet ending to our long but memorable day.