When in Rome… bring an umbrella – Day 9

Woke up extra early to attend church. It was to start at 7:00am and so we were ready by 6:15am just to make sure we got there in time. It was still dark when we left the hotel, called a taxi to take us there. It was around 20 mins away. What a relief that the service was in Tagalog and not in Italian, I only knew a few phrases and words from Italian class back in Melbourne. After an hour, church finished, as soon as we were out of the chapel, rain poured once again. We were in luck or should I say “blessed” since we met a brethren who lived right next to a train station and was happy to give us a ride since taxis hardly pass near the area. We were joined by a mother and daughter who were also going to catch the train. We found out that the man knew someone from Melbourne whom we knew as well.

We were dropped off at the station (I can’t remember the name) and so we made our way down the subway with the other two ladies. They told us that they have lived in Rome for a long time, and that they were on their way to work. They even paid for our tickets! It was really nice of them to do so. The mother told us to be careful around trains in Rome. There were plenty of pickpockets around, she said. They’ve heard of stories where backpacks were slashed from behind, wallets stolen etc and so I made sure I carried by backpack at the front of my body, close to my chest. We were to meet our tour which started their day already at the Colosseum and luckily our stop was just a station away from where the mother worked and so we had our own personal chaperone. We felt safe being around her. Our stop came and we said our goodbyes, told them to visit Melbourne in the future :).

2. Walking tour of the Roman Forum

3. Go to Vatican City for the Pope’s Easter blessing

4. Meet up with my uncle and his family who lived in Rome

The first thing we saw once out of the station was the Colosseum, the biggest amphitheatre in the world. Even in the pouring rain it stood, looking so grand. There were a lot of people lined up to get in. I called our tour director Clarisse and told us that we were outside already. She met us there but told us that we didn’t have enough time to go in since the group were about to leave soon enough. As disappointed as we were, we were still happy that we got to attend church instead. Well, we thought it wouldn’t have looked that great inside anyway due to the rain haha. 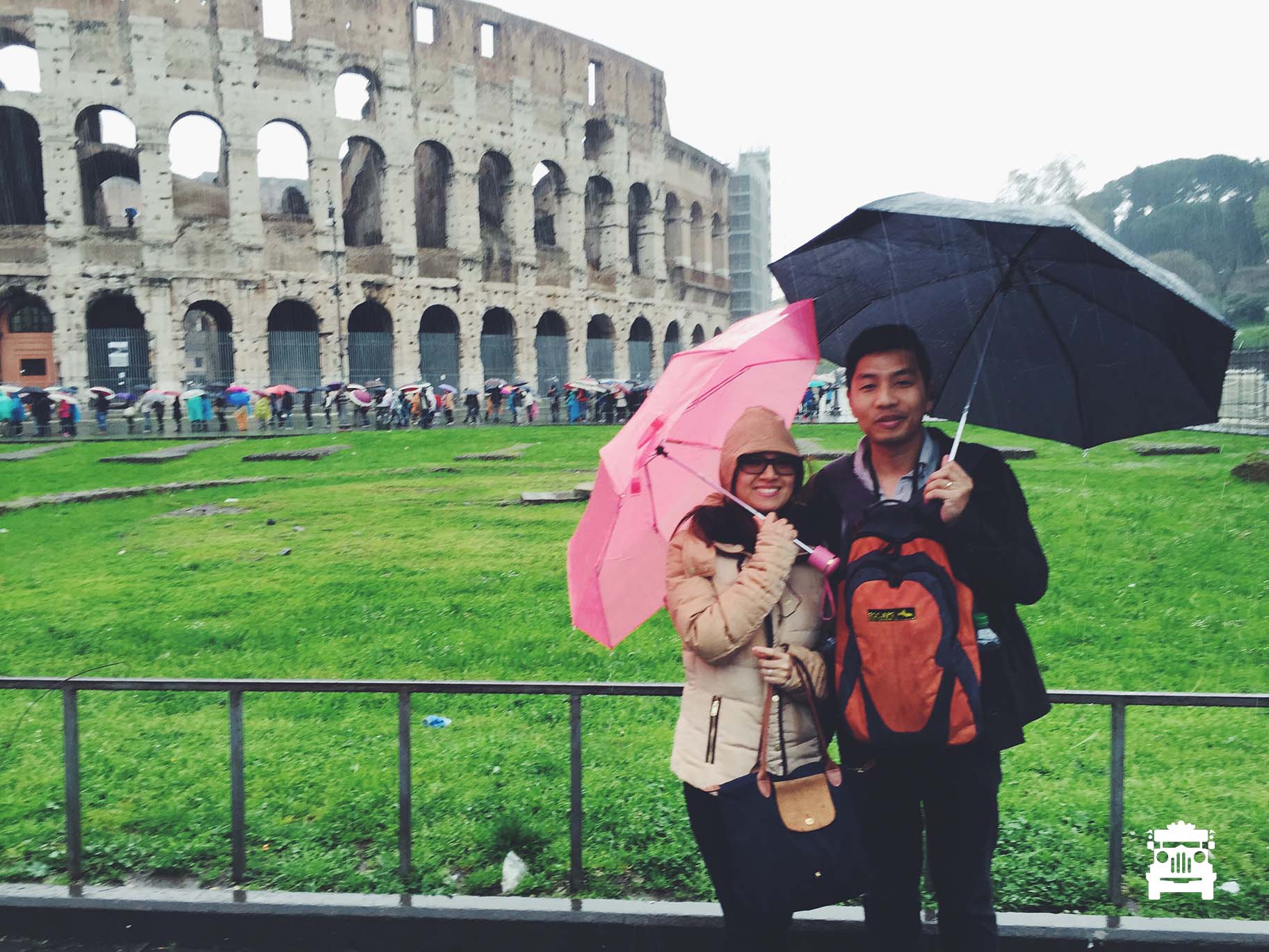 We waited around 15mins and joined the tour group, it was still raining at this time and yet we still had a walking tour of the Roman Forum (the centre of Roman life back hundreds of years ago according to Wiki lol). We had a local tour guide with us and we wore an earpiece so we could hear what she was saying as she showed us around the place. The rain however was very distracting. It started to flood, shoes were getting wet and so as much as we tried to soak up all the information, it was in one ear and out of the other :S. 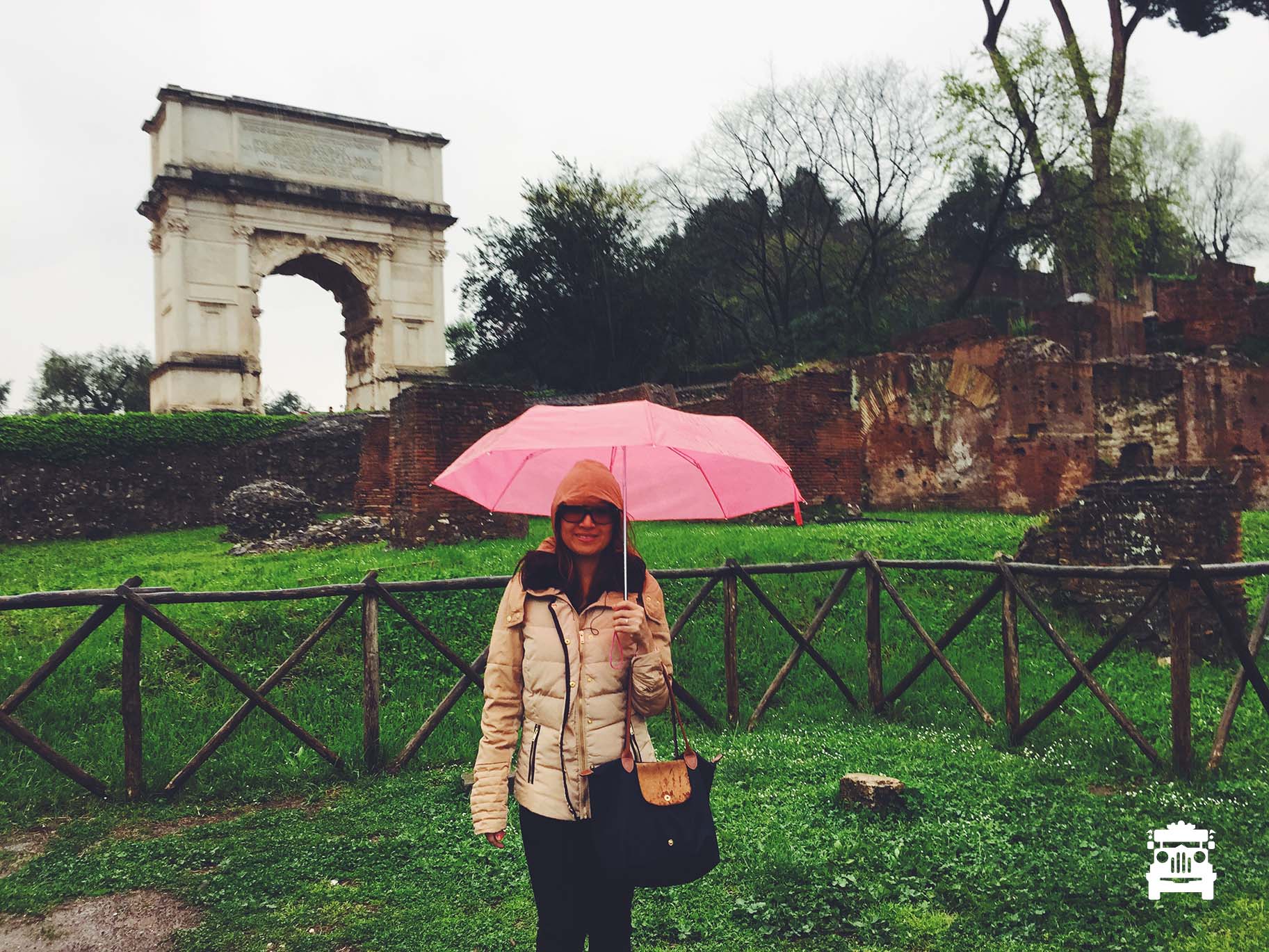 After the walking tour, we got on the bus and made our way to Vatican City. The rain eased a little once we arrived. We had lunch at a cafe, happy to have stayed inside where it was warm and dry. Wifey and I aren’t Catholics and so missing out on the Pope’s blessing didn’t really matter. It was pretty funny though as we made our way to St Peter’s Square the rain suddenly stopped. Thousands of people gathered within the square, we stayed at the back, just to be safe as we were sure that there would have been plenty of pickpockets in the crowd. We didn’t really expect the Pope to show up in his popemobile haha but he did. He waved to the massive crowd and then half an hour later he came out of the balcony, made his speech and half and hour later it was over. We had some free time on our hands and so Wifey and I decided to check out some places we didn’t get to see that night during the failed walking tour. Making our way to Piazza del Popolo or the “People’s Square” we walked past Castel Sant’Angelo which was a mausoleum for Emperor Hadrian then became a castle and fortress, apparently it was also used as a refuge for the Pope. We walked along the Tiber River, passed the Hall of Justice which the Romans called “ugly building”, it wasn’t that ugly haha. At this time it started to rain again, at least we were prepared with umbrellas. We reached Piazza del Popolo. It was a little deserted due to the rain, we took some photos and as much as we wanted to see more, we were pretty much over it. We were cold and wet and we just wanted to go back to our hotel room haha. Plus we needed to rest since we were to meet my uncle and his family who lived in Rome that night. 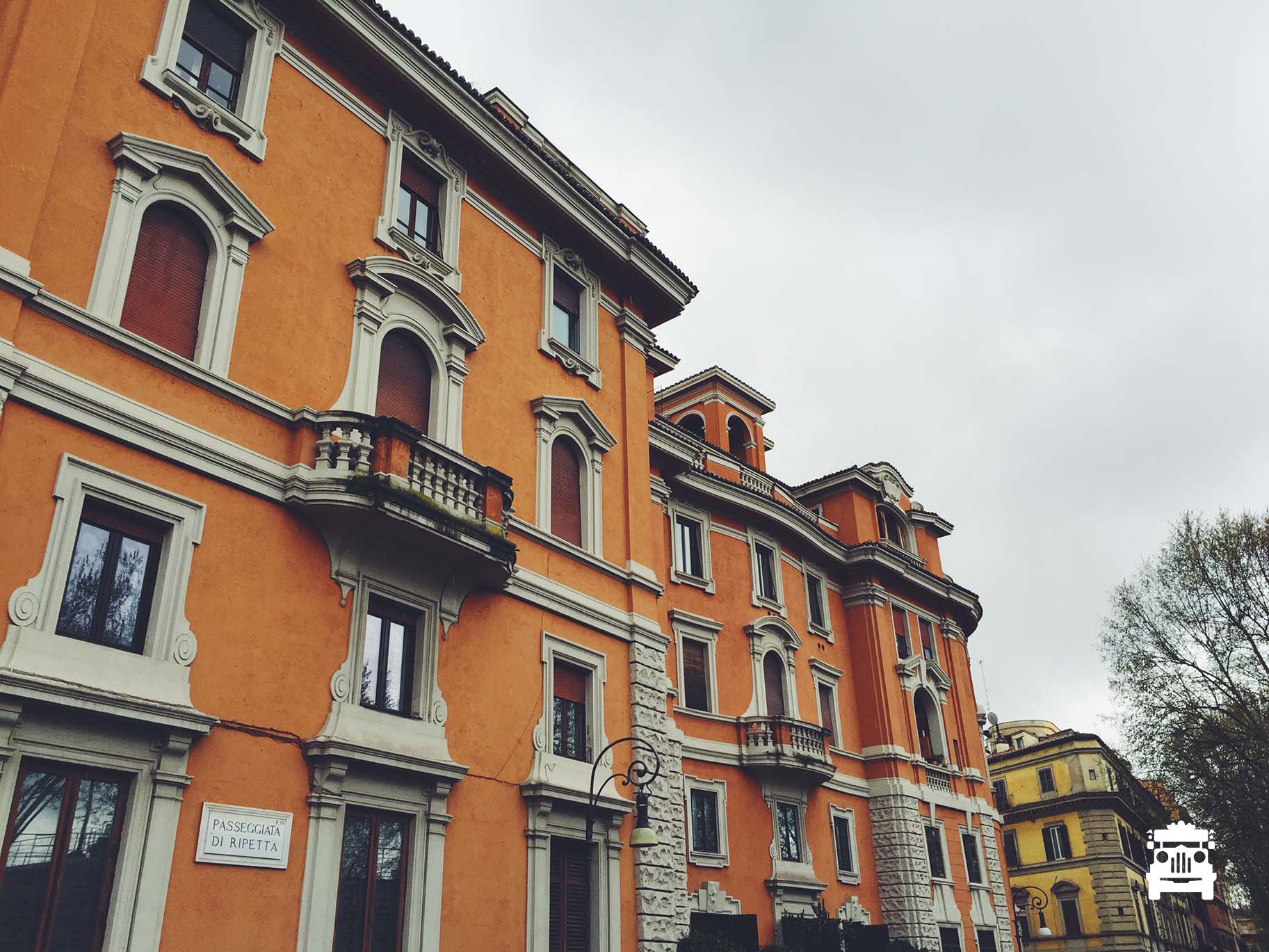 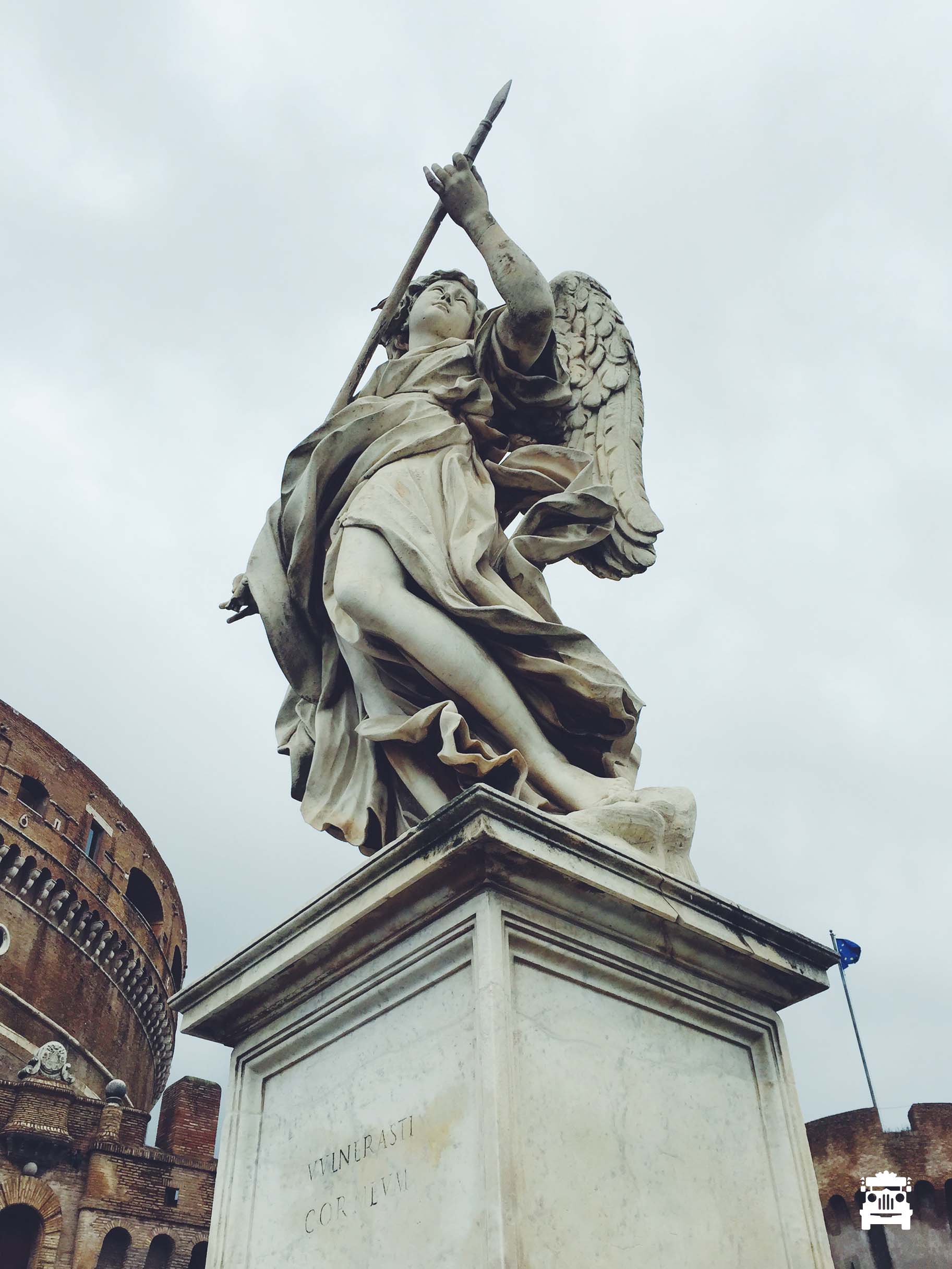 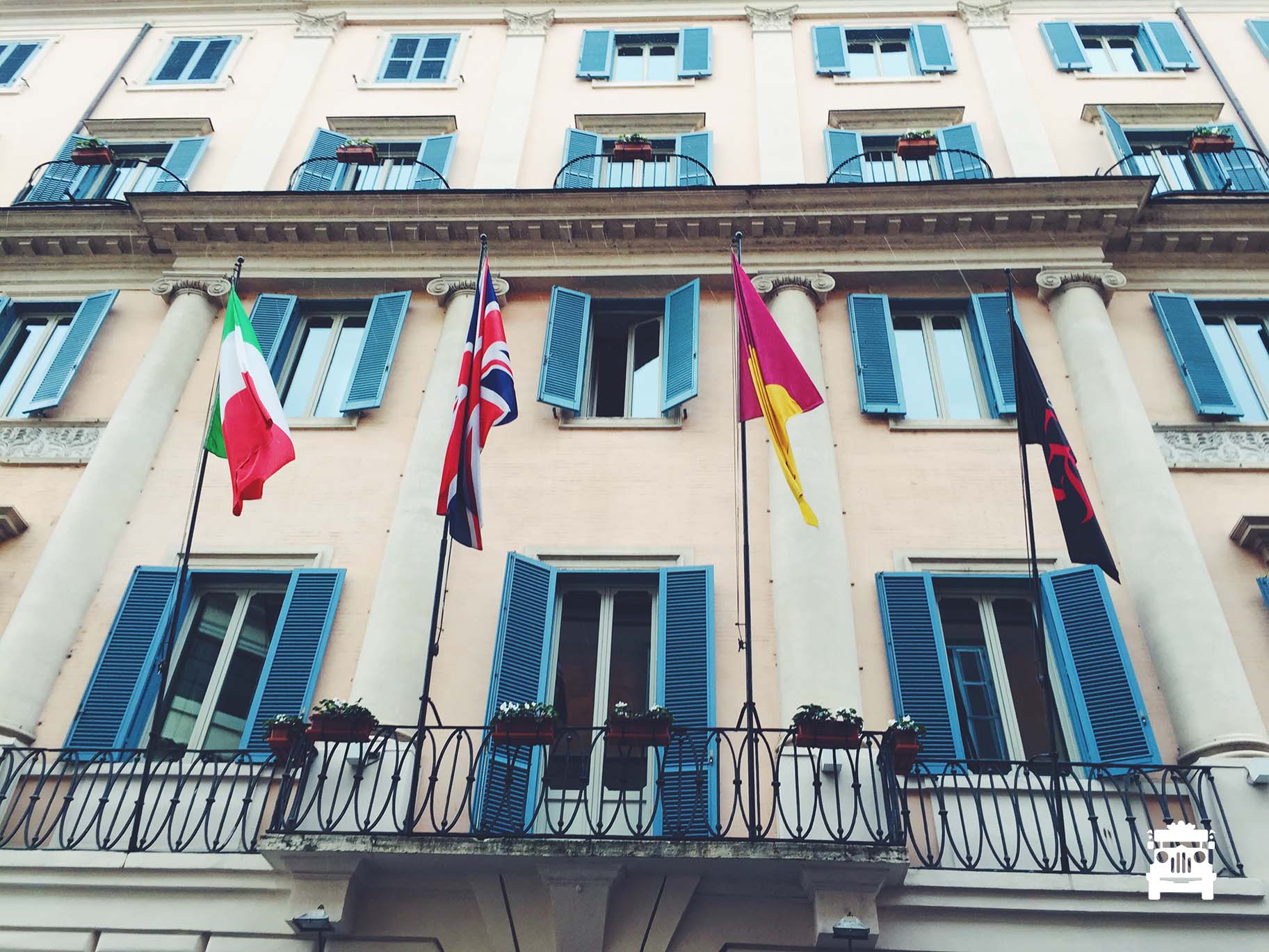 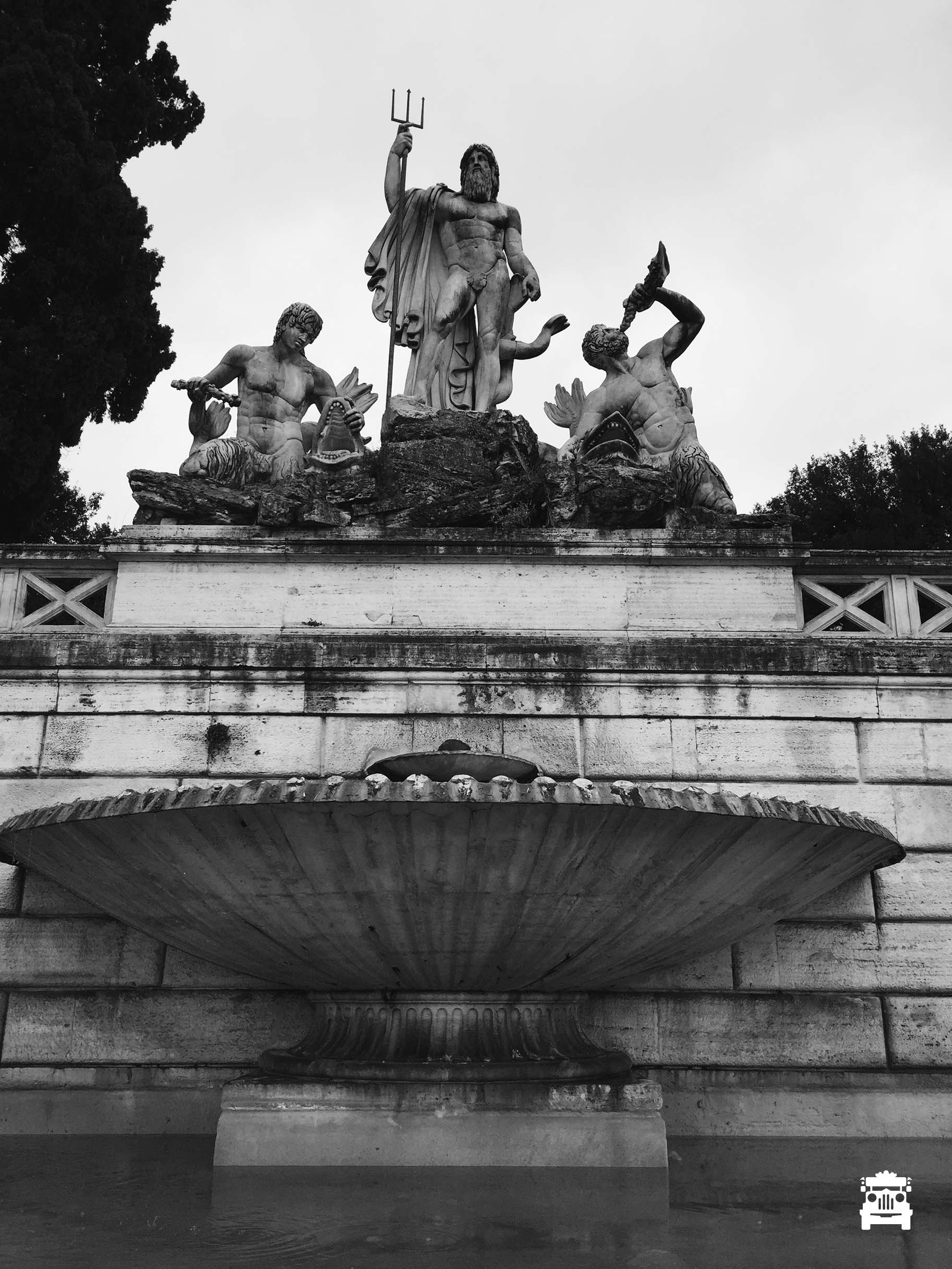 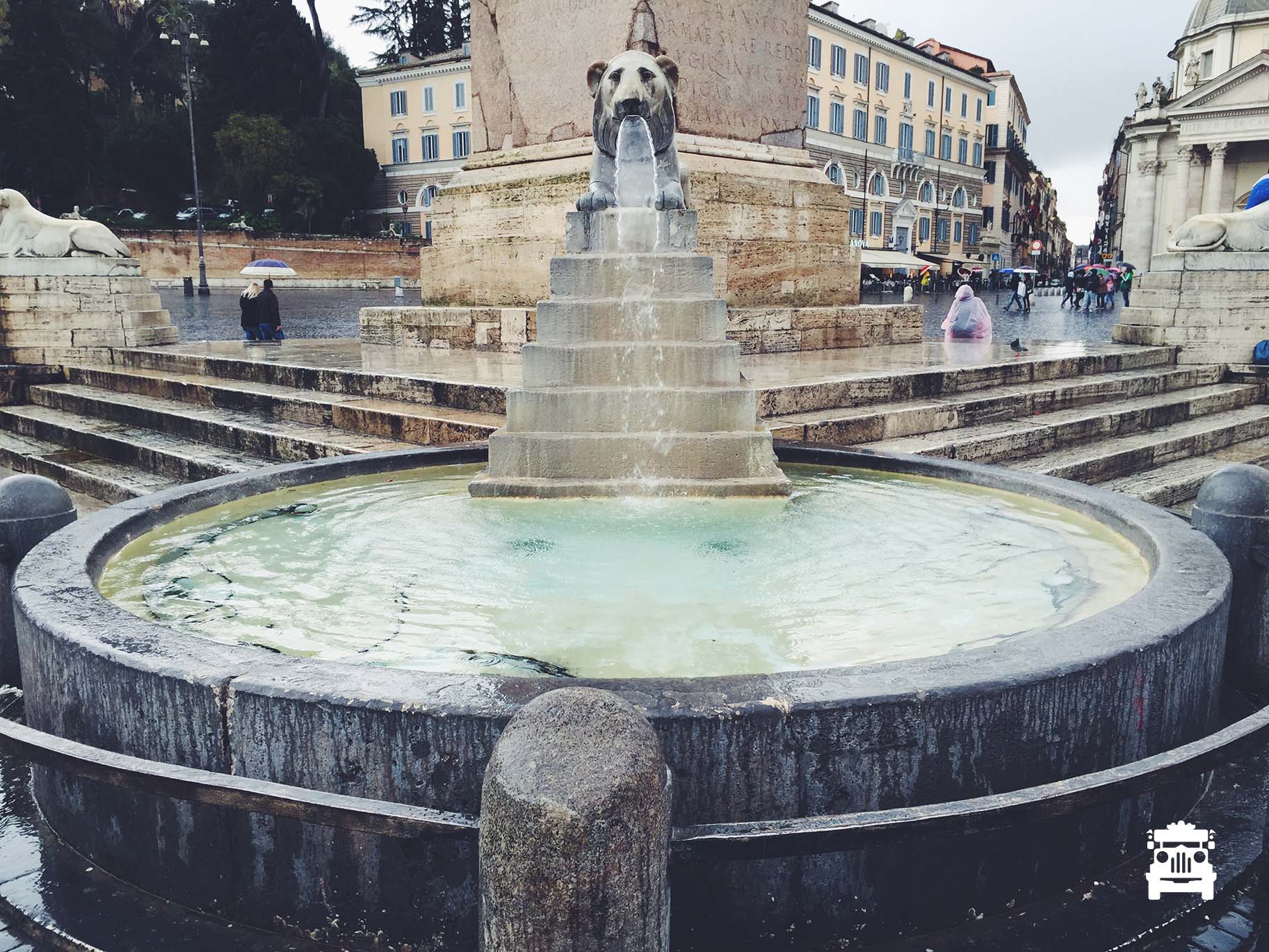 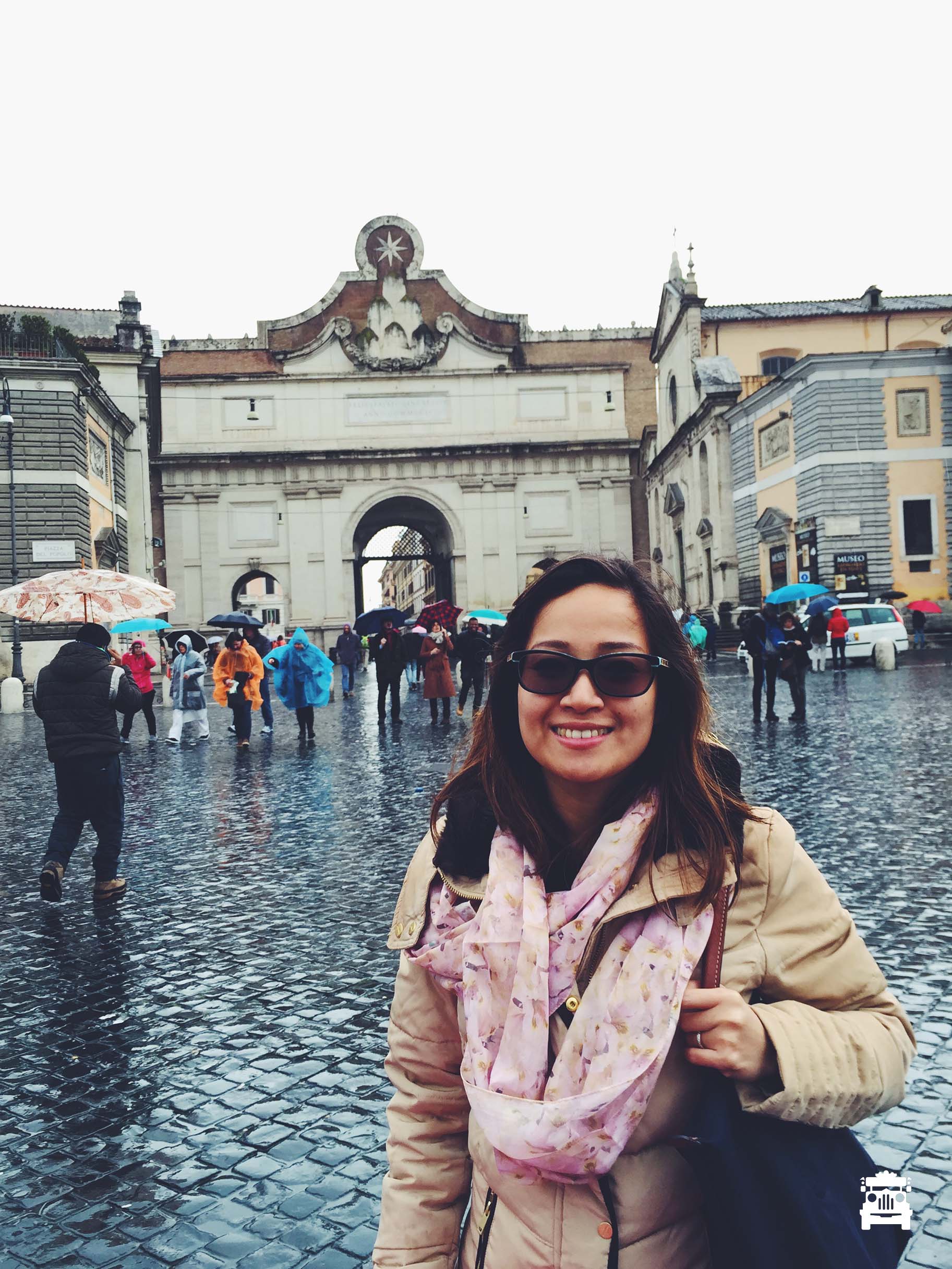 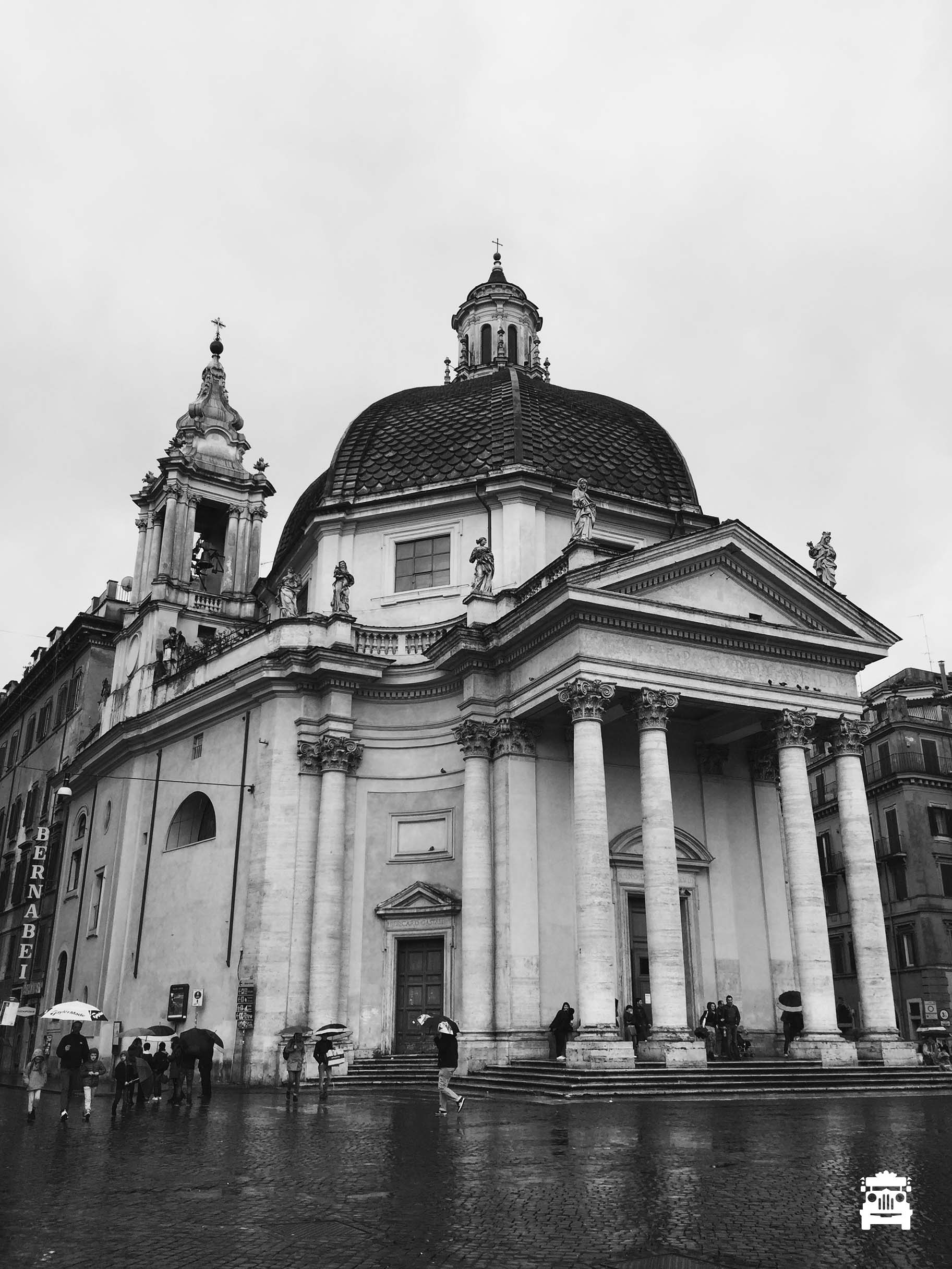 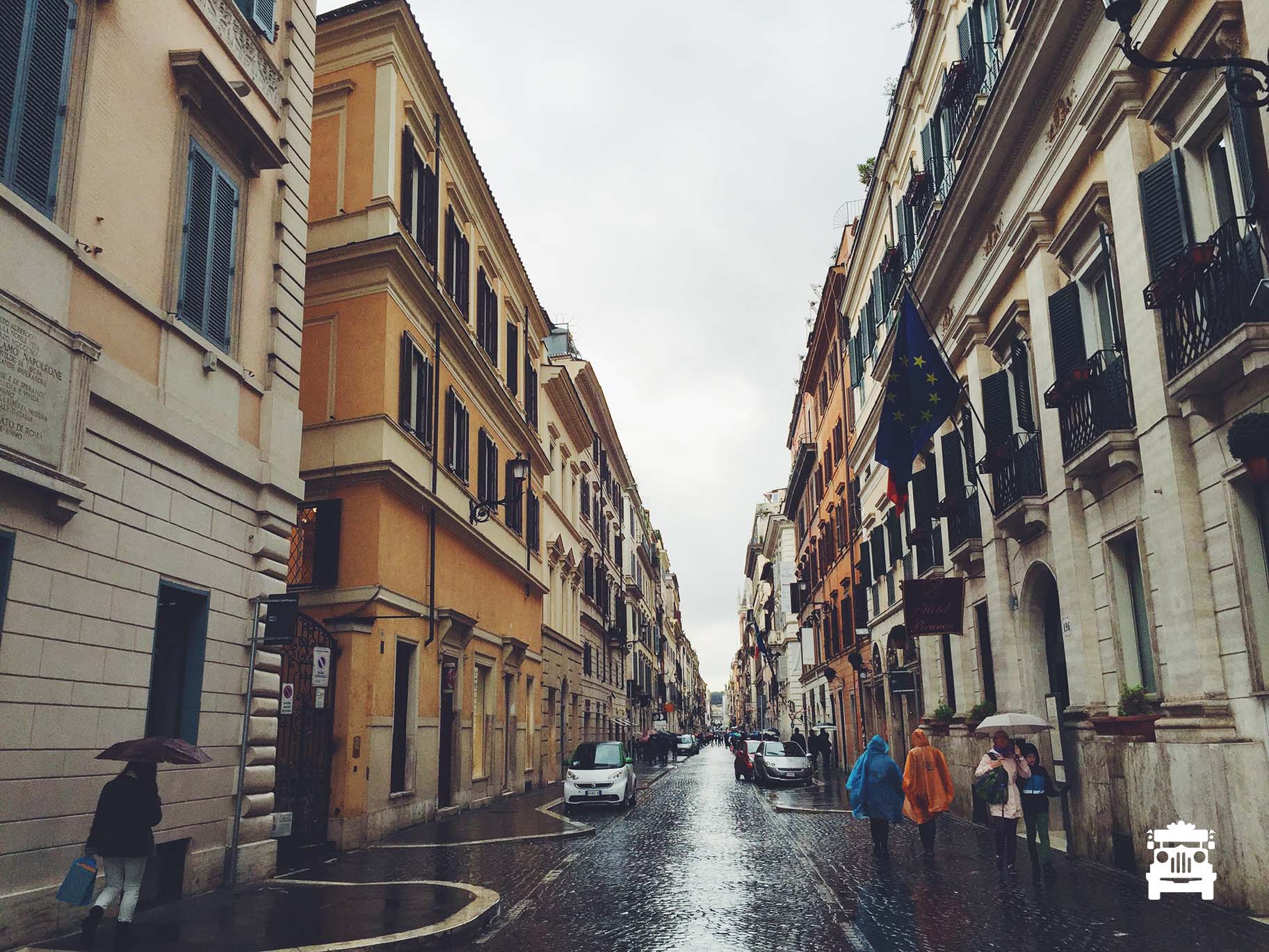 Around 7:00pm my uncle and his family met us at the lobby of our hotel. I haven’t seen him in years, he was my mum’s cousin and they have lived in Rome for more than 20 years. The last time I saw him was probably 10 years ago back in the Philippines. We told him about our time in Rome so far and how it had not been that great due to the rain and so he said he would take us to some other places that we didn’t get to go. First he took us back to Castel San’tAngelo which was near Vatican City. Then he took us to the Trastevere area where you could get a nice view of the city. Too bad it was already dark. Then we headed back to the Colosseum. It actually looked better at night. We then visited another uncle of mine who I didn’t know lived in Rome. When he saw me he didn’t really know who I was hahaha. He said he only remembered my brother who was 4 years older than me. We feasted on Filipino food that we missed so much since being on tour. They had caldereta which is a beef stew, crab in coconut milk and chicarong bulaklak which is deep fried pork mesentery (tissue within the pig’s intestine haha sounds gross but it was actually yummy). They even got me to sing karaoke hahaha it was a pretty fun night. It ended around 11:30pm and my uncle drove us back to our hotel. We bid them farewell, thanked them for their great hospitality. 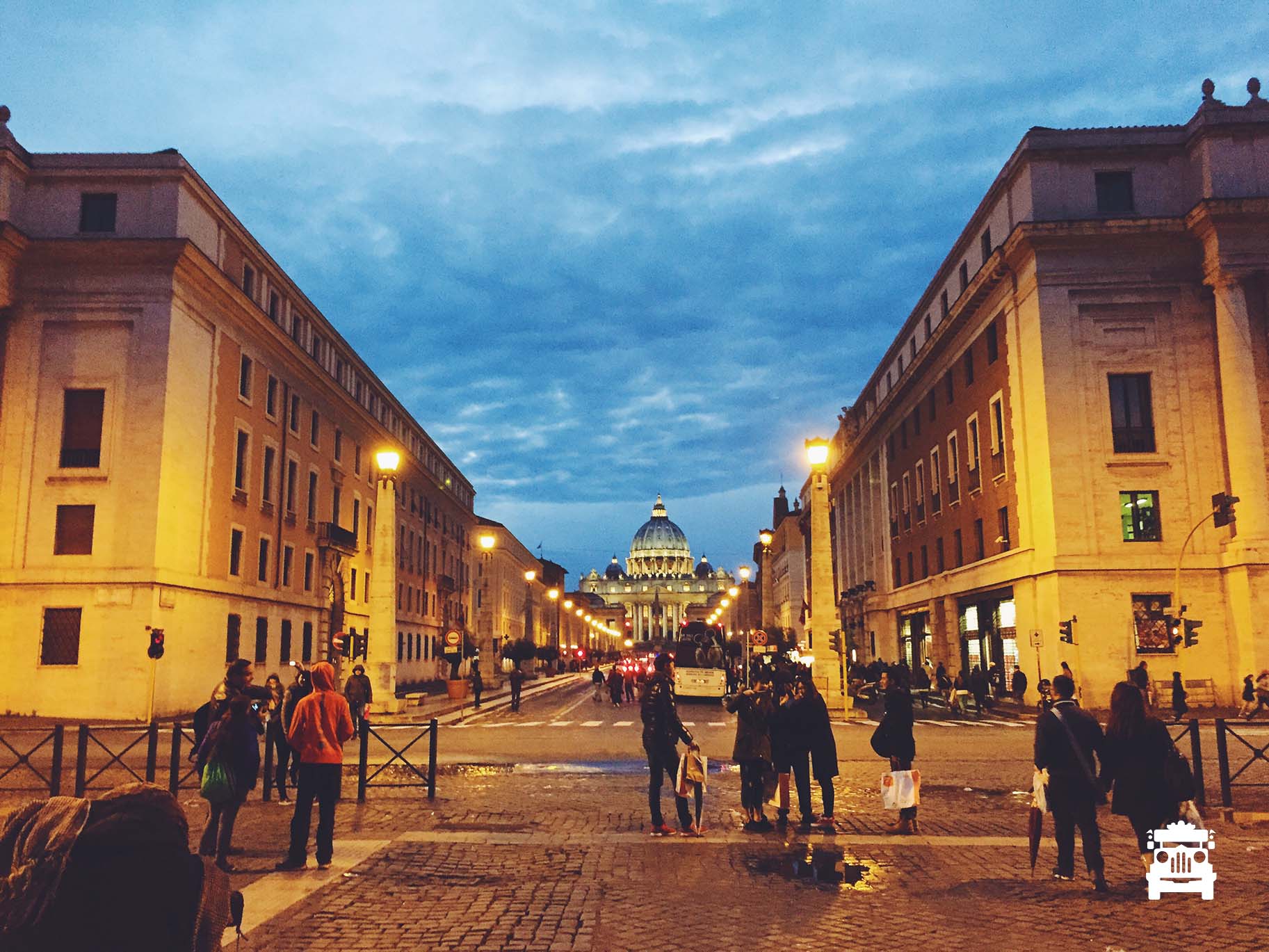 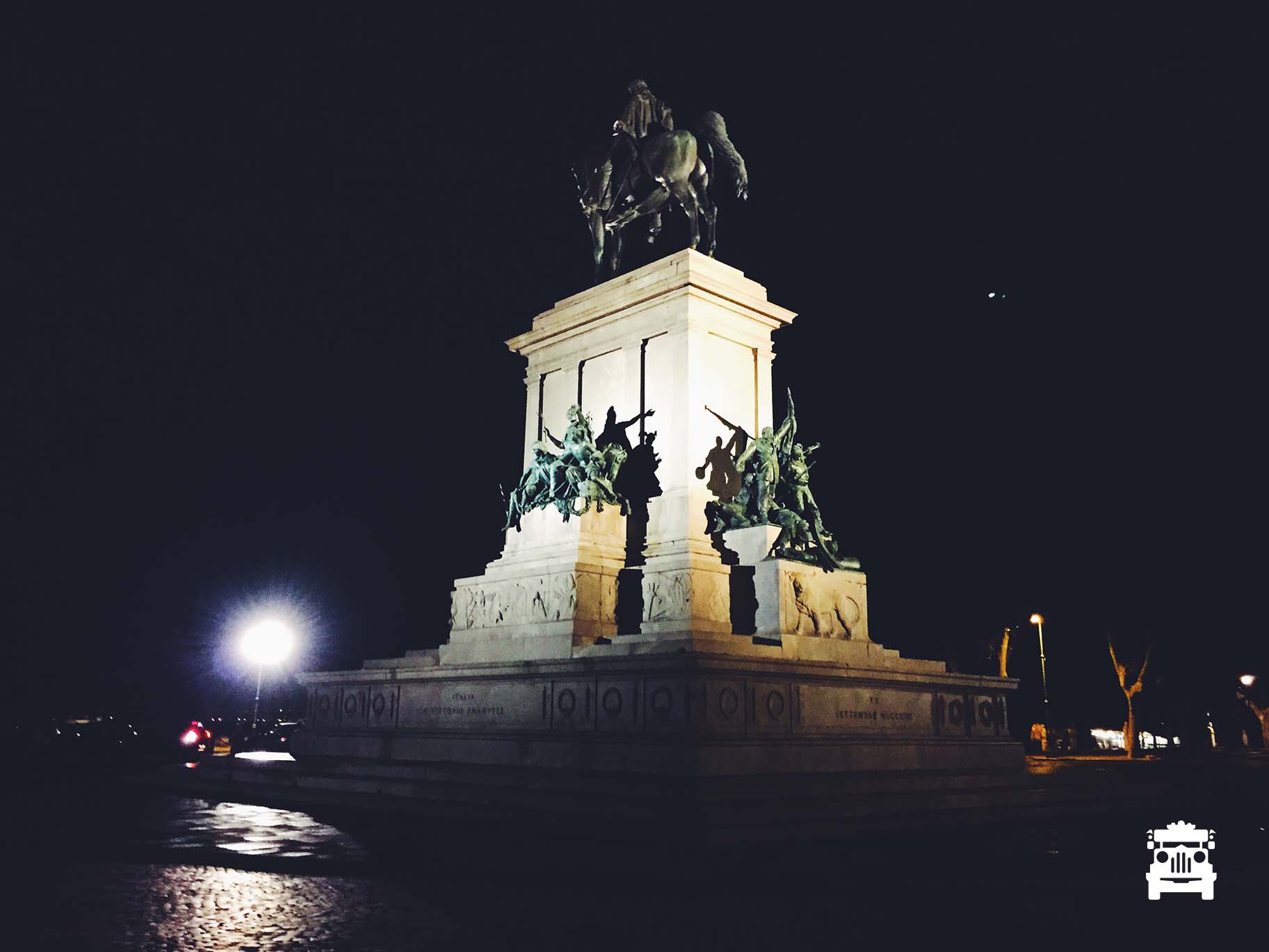 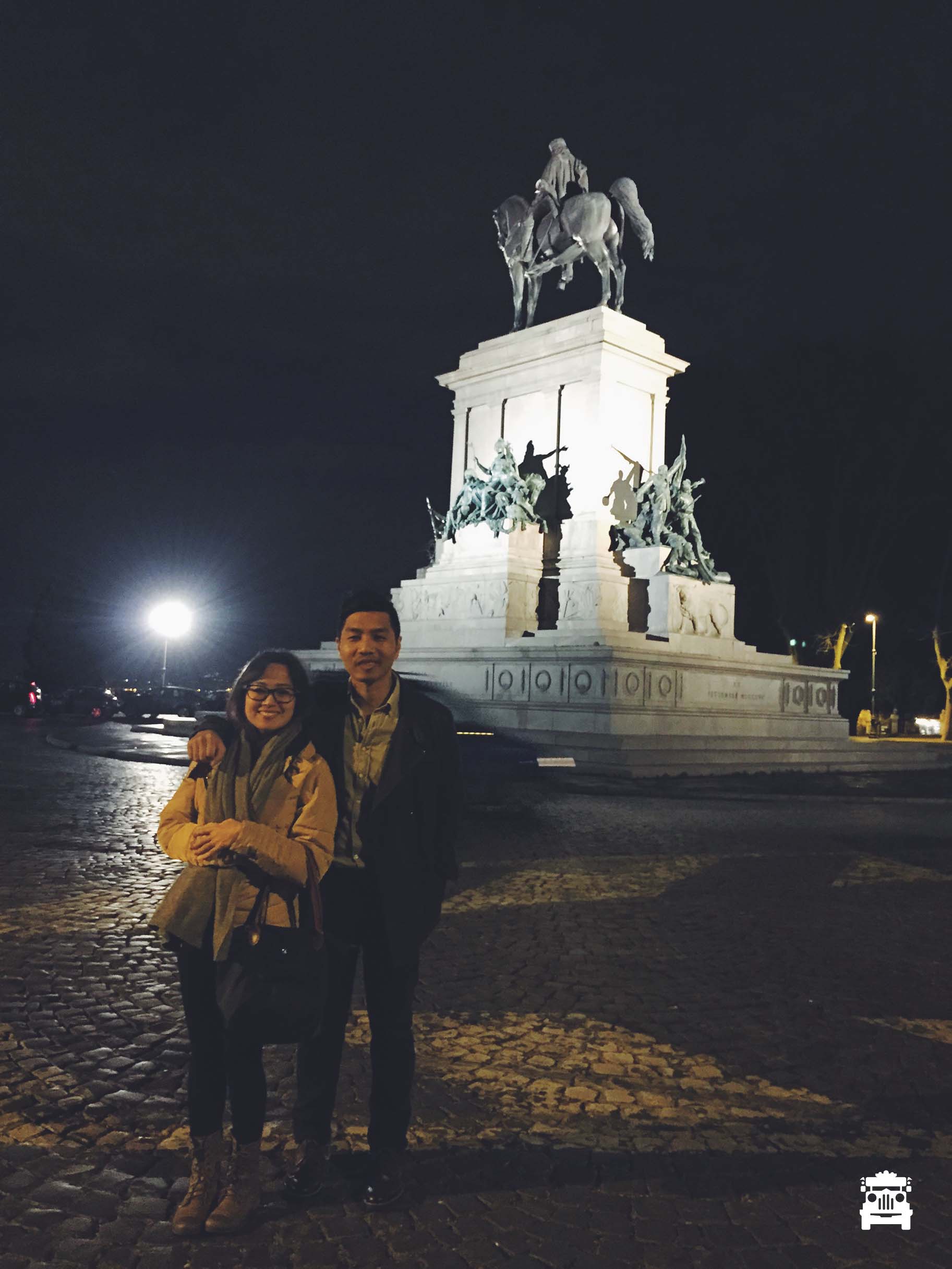 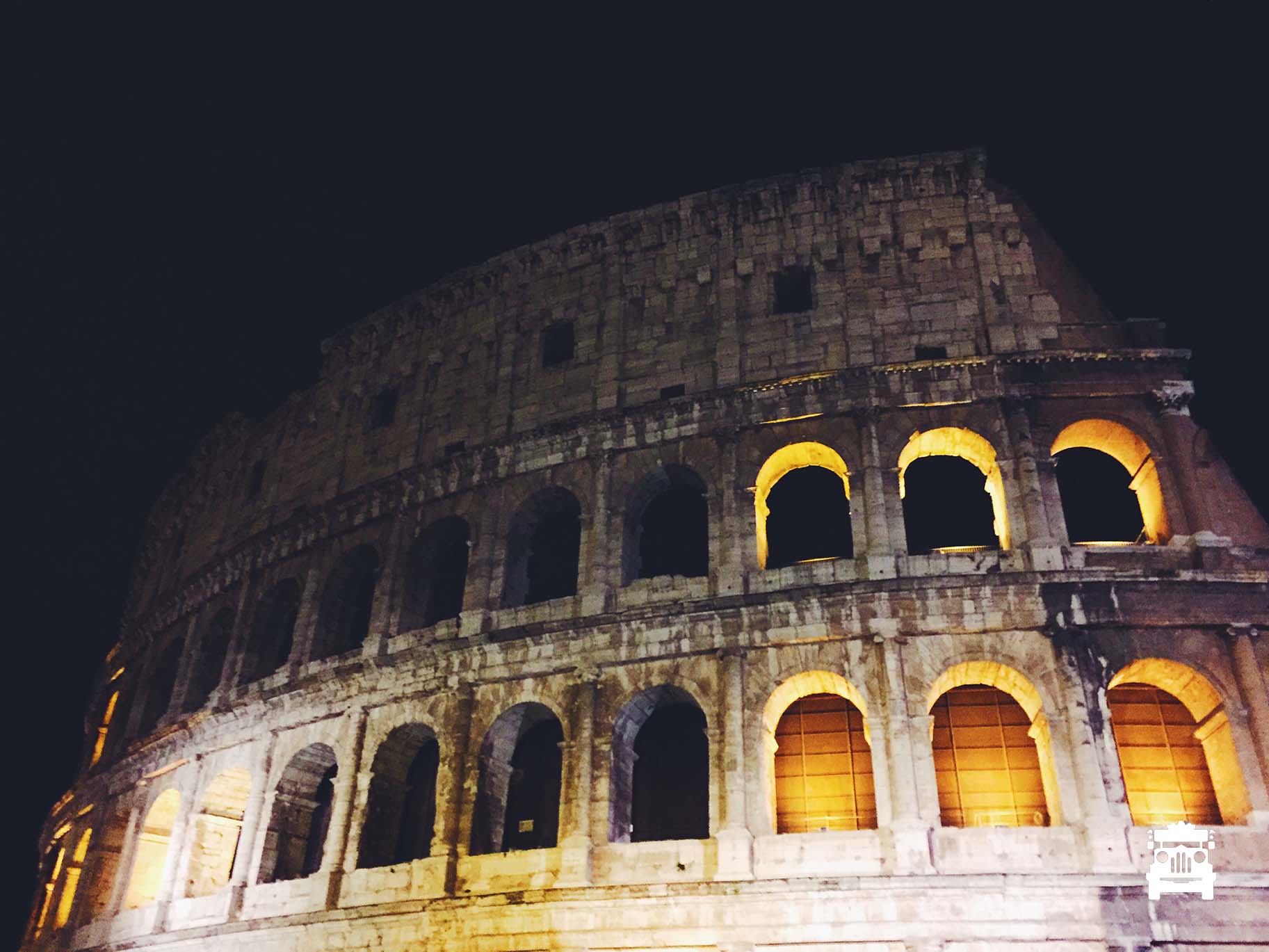 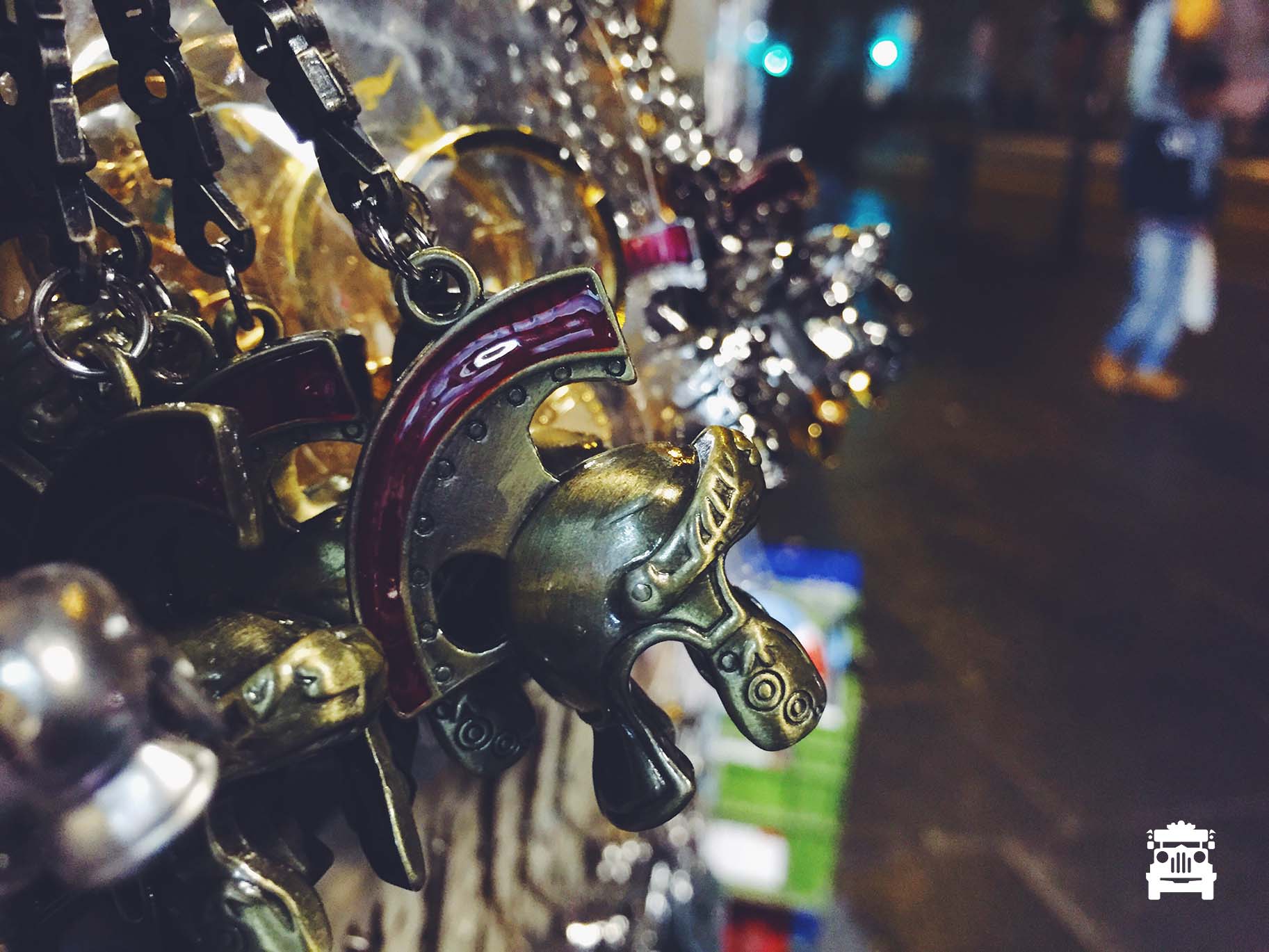 There were so many places and things that we didn’t get to see and do in Rome during our two night stay, we will go back someday preferably in summer haha so we’d be able to enjoy it more however, getting to see my uncle and hanging out with them was definitely a highlight of our trip so far.