Travel tip: If you plan to fly with Cebu Pacific, give yourself three hours (or more) before your departure time. The line outside Terminal 3 at Ninoy Aquino International Airport (NAIA) JUST to get into the terminal can get very long. Security checks are very thorough.

We learned our lesson as soon as we reached the terminal with less than 2 hours before our departure time. “We’re doomed”. I worriedly said to Wifey as I wheeled our luggage past the conga line of passengers waiting to get in. There were around three entry points to the domestic wing and all had lines as far as my eyes could see. “We’re not going to make it,” Wifey declared. We had our two kids with us, Maddy (2) and Oli (4 months) plus my mother-in-law who looked weary. There had to be another way to get in. I walked toward one of the entry points and saw a sign hidden behind a line of people that made my eyes lit up. It was an express lane for senior citizens, pregnant women and those who have small children. “Yes!” I cried in glee. We were going to make it after all.

The flight couldn’t have gone any better with the two kids both sleeping as soon as we took off. It was a very short flight and in a blink of an eye, we had landed at Caticlan Airport. With our luggage and kids in tow, we made our way outside the terminal where we were greeted by a representative from Island Star Express, the airport transfer service I booked ahead of time.

Seated at the back of a van, I looked out the window imagining swimming in the hotel pool already. Not even close. Upon arriving at Caticlan Jetty Port, forms had to be filled out at the passenger terminal before being allowed to ride on the boat. Travel tip: Make sure you have a printout or a digital copy of your hotel booking ready to show officers. Travellers must have confirmed accommodation booking on the island or you are refused entry.

You could smell the salt in the air as the boat motored toward the beach horizon. The ride, which was surprisingly smooth lasted only 10 minutes. We were now in Boracay. Cagban Jetty Port was buzzing with people, mostly vacationers like us. A (paid) porter helped us carry our luggage from the boat down to the waiting area on the shore. Travel tip: Always have smaller bank notes with you (P20, P50 and P100) for paying and tipping.

Then the waiting game began. We had one more trip to make – shuttle from the jetty to our hotel. Ten minutes later and there was no shuttle. Twenty minutes later and still no transport. We were all hungry since skipping lunch, which fuelled our annoyance even more. Snacks were depleted at this point and Maddy had to settle for chocolate pods my mother-in-law had in her bag (she didn’t complain). After waiting for half an hour, which felt more like eternity (two kids under 2 can do this to you), we were finally on board an open-aired vehicle (we were expecting an air-conditioned van).

Due to the current reconstruction of the main road, the streets were unfinished. Sewers left opened, exposing passersby to the stench. It was not a pretty sight. Traffic built up in areas where only one lane was opened, filling the air with exhaust expelled from idle vehicles waiting their turn to pass through. My mother-in-law covered Oli’s nose with a cloth to minimise breathing in the “toxic” air. “I’m going to give this airport transfer a true review”, Wifey said firmly, clearly irritated at the current situation we were in.

Stepping onto the marbled tile floor of Savoy Hotel lobby felt fantastic. Weight was lifted off my shoulders literally, as I put our bags and luggage down and made our way toward the concierge. Wifey downed her welcome drink in seconds. A short wait later and we were ushered to our room.

“Wow, not bad!” I said as soon as we entered the room. “It’s big”, my mother-in-law declared. The executive suite had two bathrooms with shower and toilet, a separate sitting area, a walk-in closet and a spacious bedroom where you can add an extra bed if needed. Blue, green and yellow items in the room provided a beachy tropical vibe. Welcome cookies were laid on a table, including a hand-woven bag free to use during our stay.

As we were too tired to venture out for dinner, the hotel restaurant was our only choice. Savoy Cafe staff were still preparing for the dinner buffet that was to happen soon but we couldn’t wait any longer. We were all craving something grilled and that is what was served to us, grilled pork belly, chicken and tuna steak, balanced out with a serve of salad. The herb grilled chicken was the standout dish, perfectly seasoned and the gravy paired with it took it to another level.

Buffet breakfast is what I look forward to the most whenever we are on holidays and the one at Savoy Cafe did not disappoint. A different set of hot dishes were served every day, ranging from typical Filipino breakfast dishes like sinangag (garlic fried rice) and tocino (sweet cured pork) to continental food like scrambled eggs, bacon, baked beans and sausages. They offered a wide variety of bread and pastries. The dessert table, abundant with various cakes, sweets and tropical fruits was always surrounded by hungry guests including myself. You could also sip on some warm noodle soup if you wanted something light in the morning. There were also plenty of kid-friendly dishes such as cereal and pancakes. 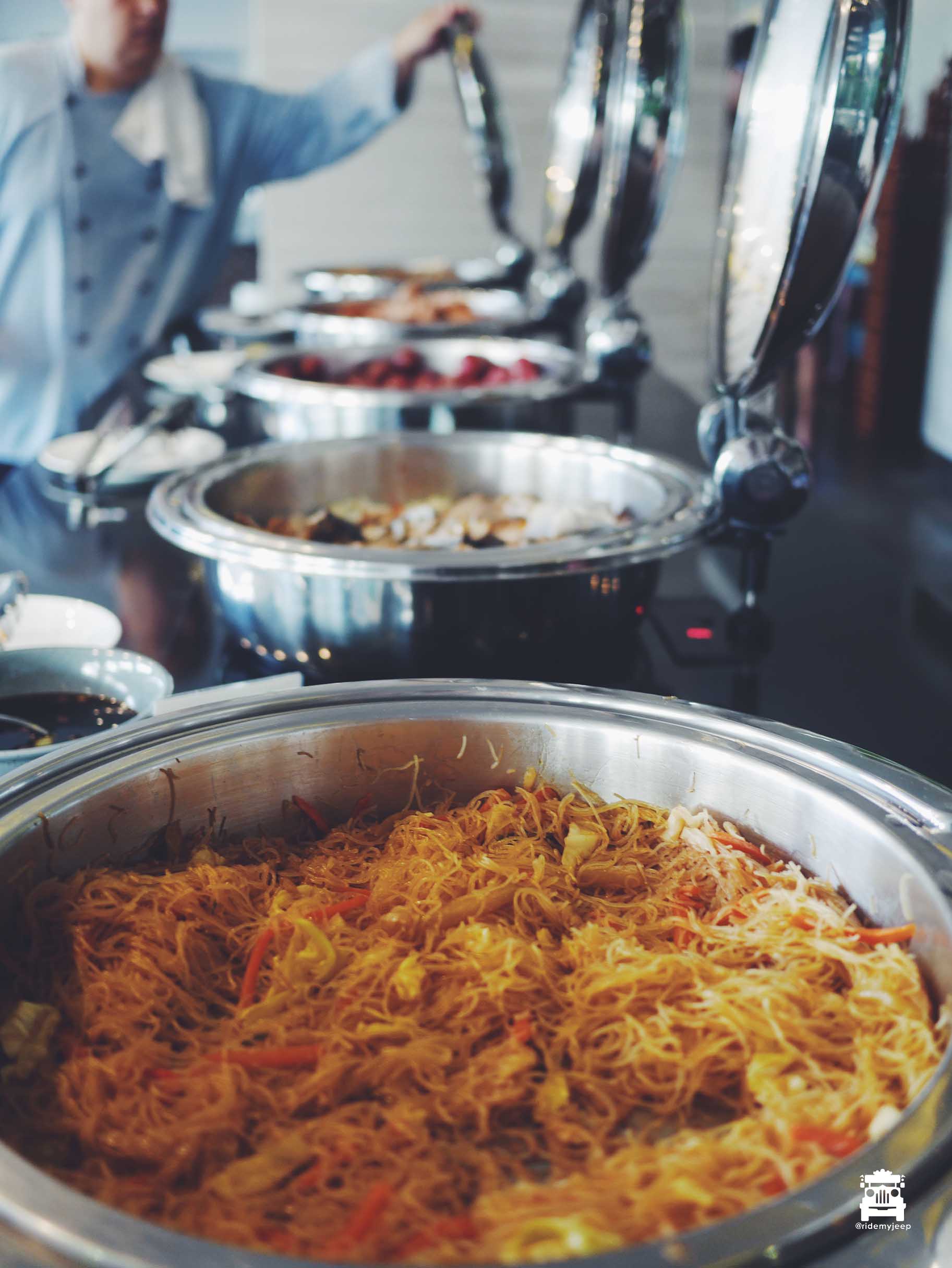 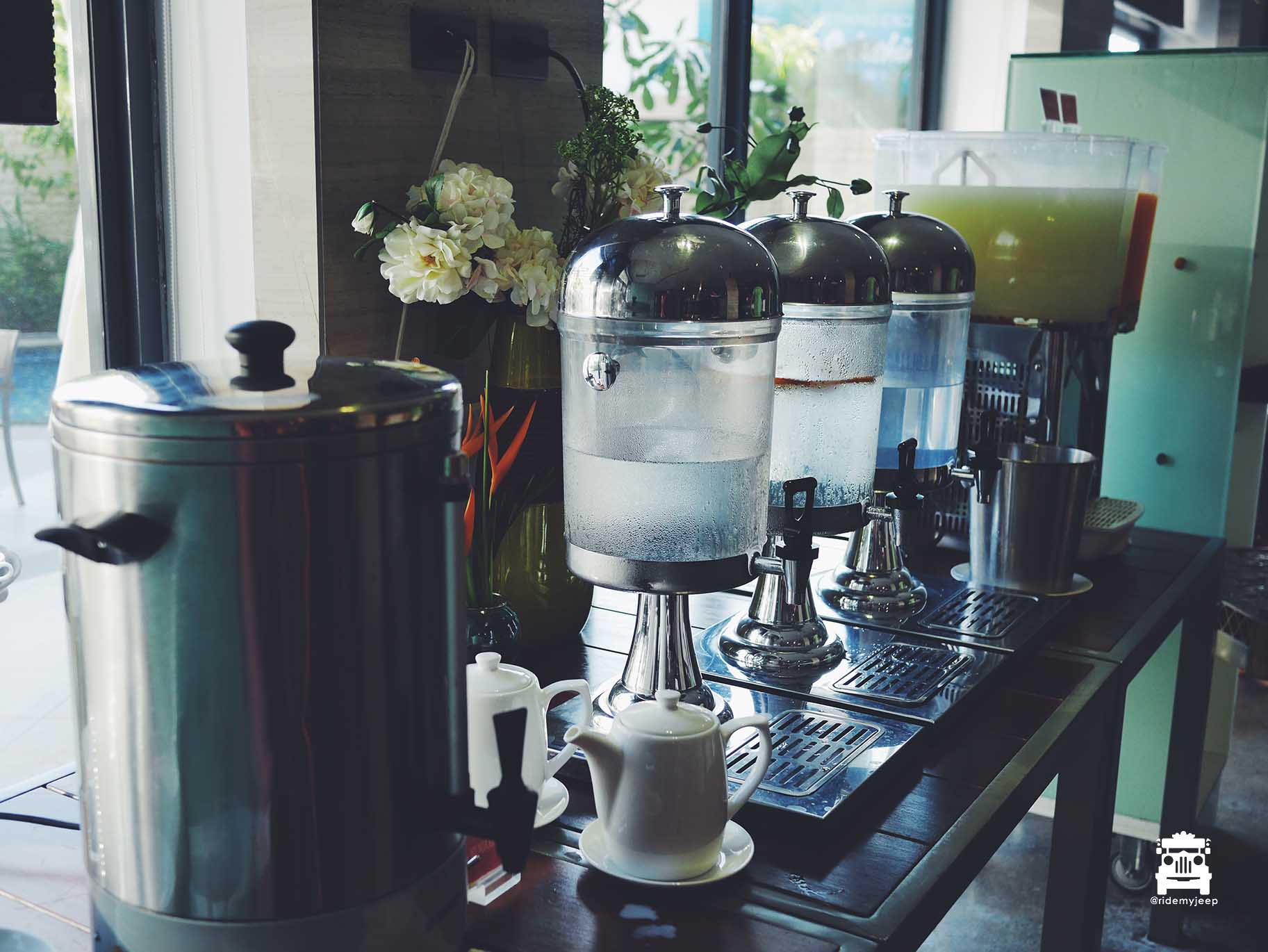 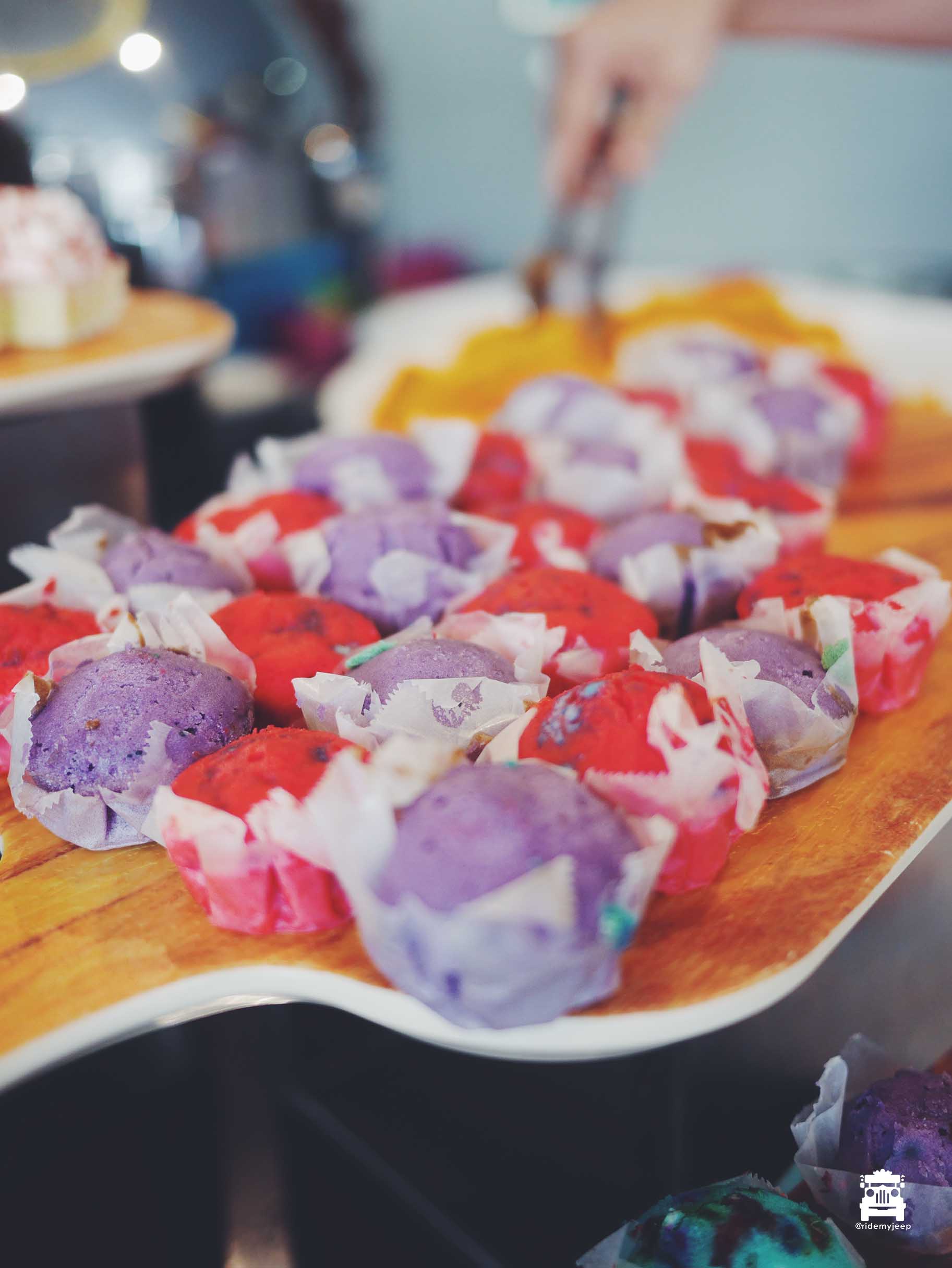 Savoy Hotel had two big pools that could accommodate a lot of people. It was not heated and during our stay, it was quite windy and so it was a little too cold for a dip. It didn’t stop other guests for enjoying the water though. The children’s pool was quite small but warmer. Maddy didn’t mind the temperature, too distracted by all the fun she was having. Oli had a quick dip, splashing his chubby feet in the water. 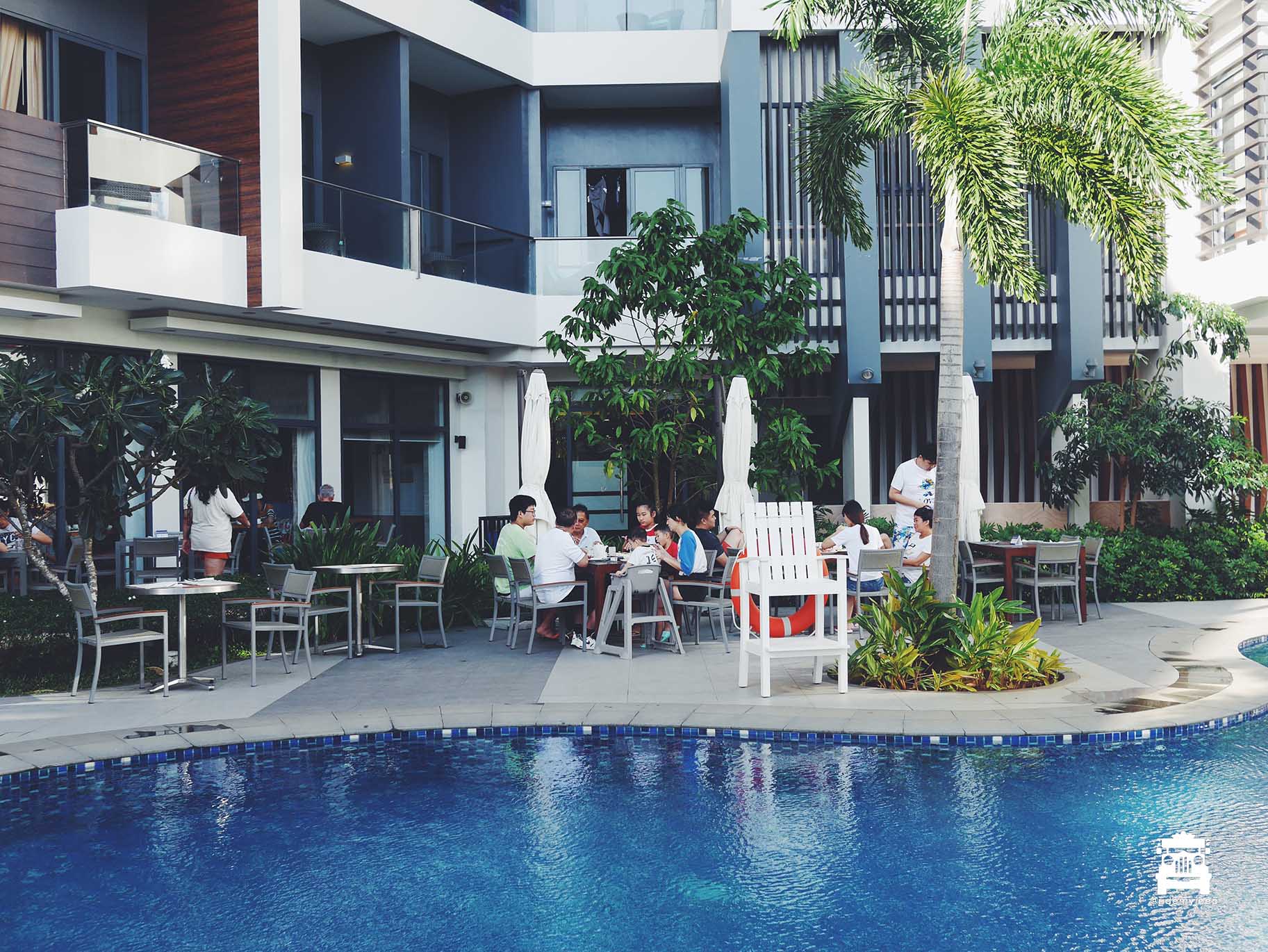 While I initially thought the hotel was beachfront, it was actually a 5-10 minutes’ walk (depending on your speed) to Ilig-Iligan Beach. Savoy offered a shuttle service that ran during the morning until late afternoon that could take you there and back.

One morning after breakfast, we decided to walk down instead. It was another windy day yet the beach lounges were filled with people, sunbathing. We managed to find a spot under a tree, that shielded us from the sun. Ilig-Iligan was a small stretch of white sandy beach. A handful of tall coconut trees swayed in the breeze. The water was striking blue. There were no shops around, no vendors spruiking souvenirs. It was very much a private beach. We only managed to dip our feet in the shallow as the waves were a little rough, however I could tell that it would have been a nice place for a swim if the weather was more pleasing.

As we walked around D’Mall, it was evident that Boracay was back in business. Restaurants, old and new were filled with diners. Souvenir shops were flocked by tourists. Conversations in different languages could be heard as we strolled through the alleyways to find a place to lunch.

The smiling crab sign of the Wokeria Crab Pasta House stood out from the crowd. It was obvious from the name and the decorations on the wall that cooking crab is what they were famous for. Due to my allergies, Wifey didn’t bother ordering crab (even though I told her it was fine!). We ordered the seafood pasta, grilled squid and a serving of lechon kawali (deep fried crispy pork belly). The squid was tender, smoky and sweet. It was delicious with rice. “I could probably cook a better one”, I boasted after tasting the pasta dish.

The last time I set foot on Boracay’s most famous White Beach, it was back in 2010. Nine years later and I could definitely see some positive improvements.

The impact of the 6-month closure of Boracay was evident in our stay. It was a small step towards complete rehabilitation but a necessary one acting as a wake-up call to government officials, establishment owners, visitors and locals that we need to take better care of the island. Would I go back again? Maybe in a few years’ time when the roads are complete and all establishments are environmentally compliant.