Our day started with a buffet breakfast at Coral Cafe. As early as it was, it was quite humid already and so we asked to be seated in the air-conditioned part of the restaurant. Once again we were spoilt for choice of breakfast dishes available. They served tocino this time which is sweet cured pork, perfect with a fried egg and garlic fried rice. The pan de sal (Filipino bread roll) freshly baked in-house was one of the best I had ever tasted. It was sweet, milky, fluffy on the inside and a little crispy on the outside. 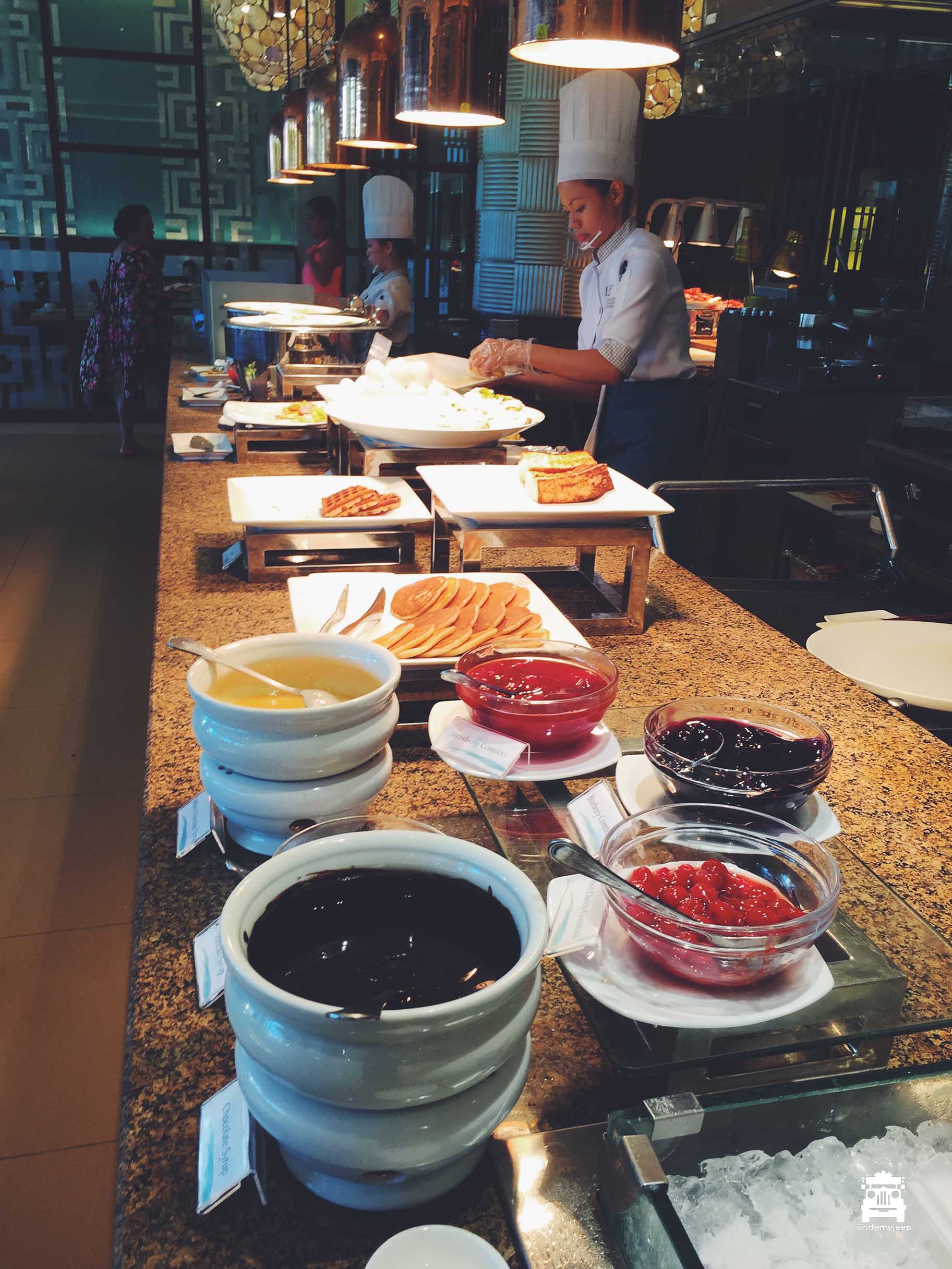 After a satisfying meal, we headed straight to the lobby to wait for our driver. We had booked a day tour through Wow Bohol Tours jam-packed with iconic places to visit and things to do. The place I was most excited to see was the famous Chocolate Hills. Soon enough our driver/tour guide June arrived and we were off to our first destination – the man-made forest of Bohol.

The winding road we were on that snaked around the steep terrain seemed quite dangerous for an unexperienced driver, however we had a pro behind the wheel yet it didn’t stop me from holding on tight to Bub just in case. Lush vegetation bordered the side of the road, the leaves so green, it was refreshing to the eyes. As we drove further, towering trees appeared, its trunks stood side by side. The canopy blanketed not only the forest floor but the road as well. We had arrived at the man-made mahogany forest. Due to deforestation of the area more than 30 years ago and as part of the reforestation program, mahogany seedlings were planted over a two kilometre stretch. The trees had thrived ever since and has become a tourist attraction. June stopped the van on the side of the road, “Picture time”, he said. 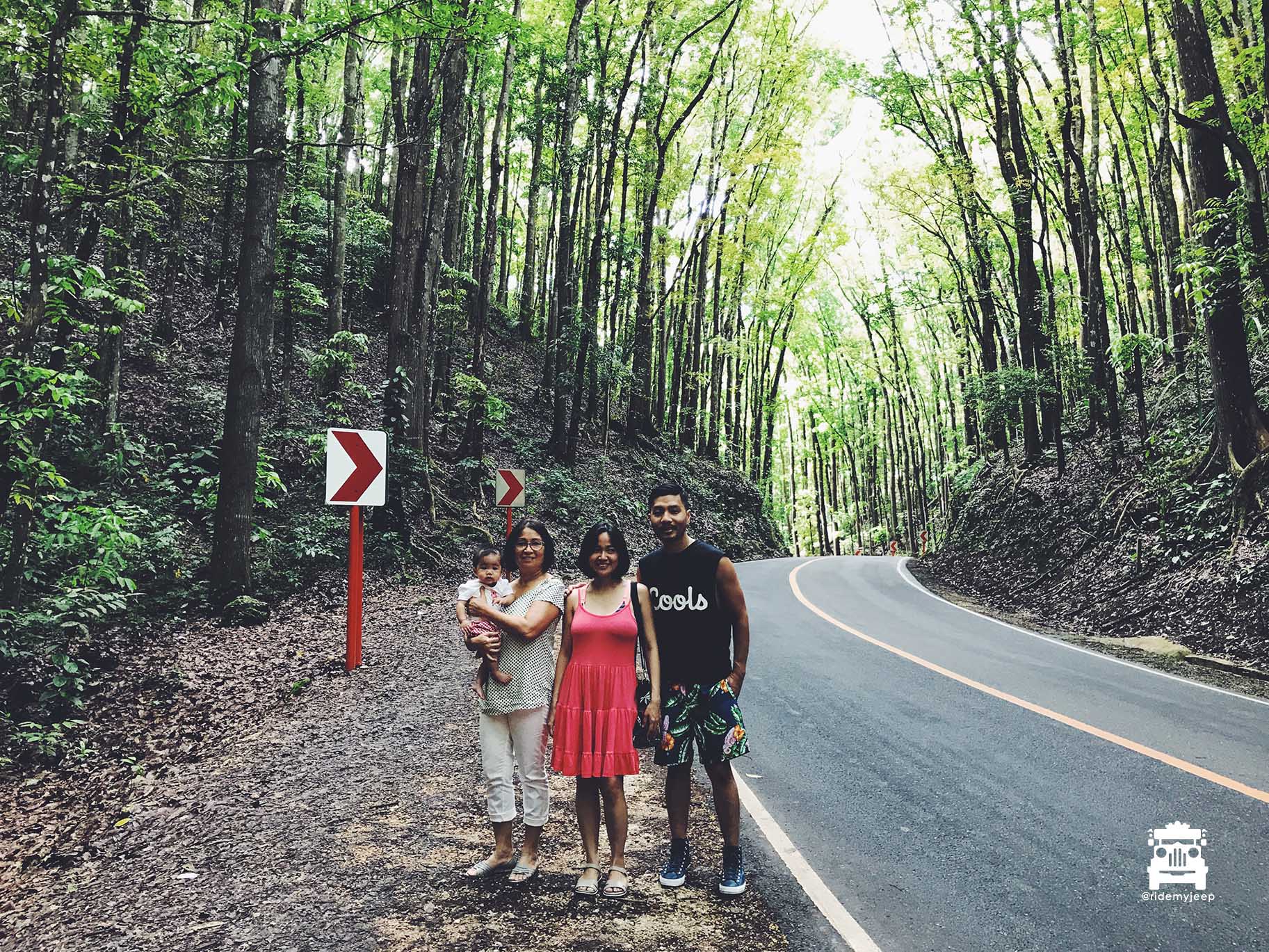 *Travel Advisory*
As I did some research after visiting the Tarsier Conservation Area in Loboc, I would recommend you NOT to go here, but instead visit the Philippine Tarsier and Wildlife Sanctuary in Corella. It is technically NOT a sanctuary and if you would like to observe tarsiers in their “natural” habitat, take the effort and go to the latter. This place was part of our Bohol tour and had I known about what I had read about this place, I would have advised the driver to skip this part of the tour.

I was very excited as I entered the “sanctuary” for I was finally going to see a tarsier in real life. The Philippine tarsier is one of the smallest known primates in the world. And adult can grow up to 15 cm. Its massive eyes give it a very distinct look but very useful for seeing in the dark for they are nocturnal creatures. We were greeted by a 6 ft tall Tarsier statue at the entrance that Bub could not stop looking at with curiosity. A guide at the entrance told us to follow the path and to make sure we were quiet and that there was to be no flash photography. The path was rough, steep in some parts and so I carefully manoeuvred my way with Bub strapped in her carrier on my chest. One of the guides showed us the way to the first tarsier cosily hugging a branch under a somewhat strategically placed palm frond. “Tarsiers move from one tree to another and every morning we try to find them”, she said. How convenient that it seemed to have found the tree with a makeshift roof next to the “Silence please” sign, I thought to myself. Wooden branches acting as barriers were placed around the trees with tarsiers in it. As we moved from one station to another, more tourists where piling behind us who were very loud oblivious to the signs that say to keep quiet. I took as many pictures as I could and within 20mins we had reached the entrance of the park once again. The exit was through the gift shop which we ignored and headed back to the car. 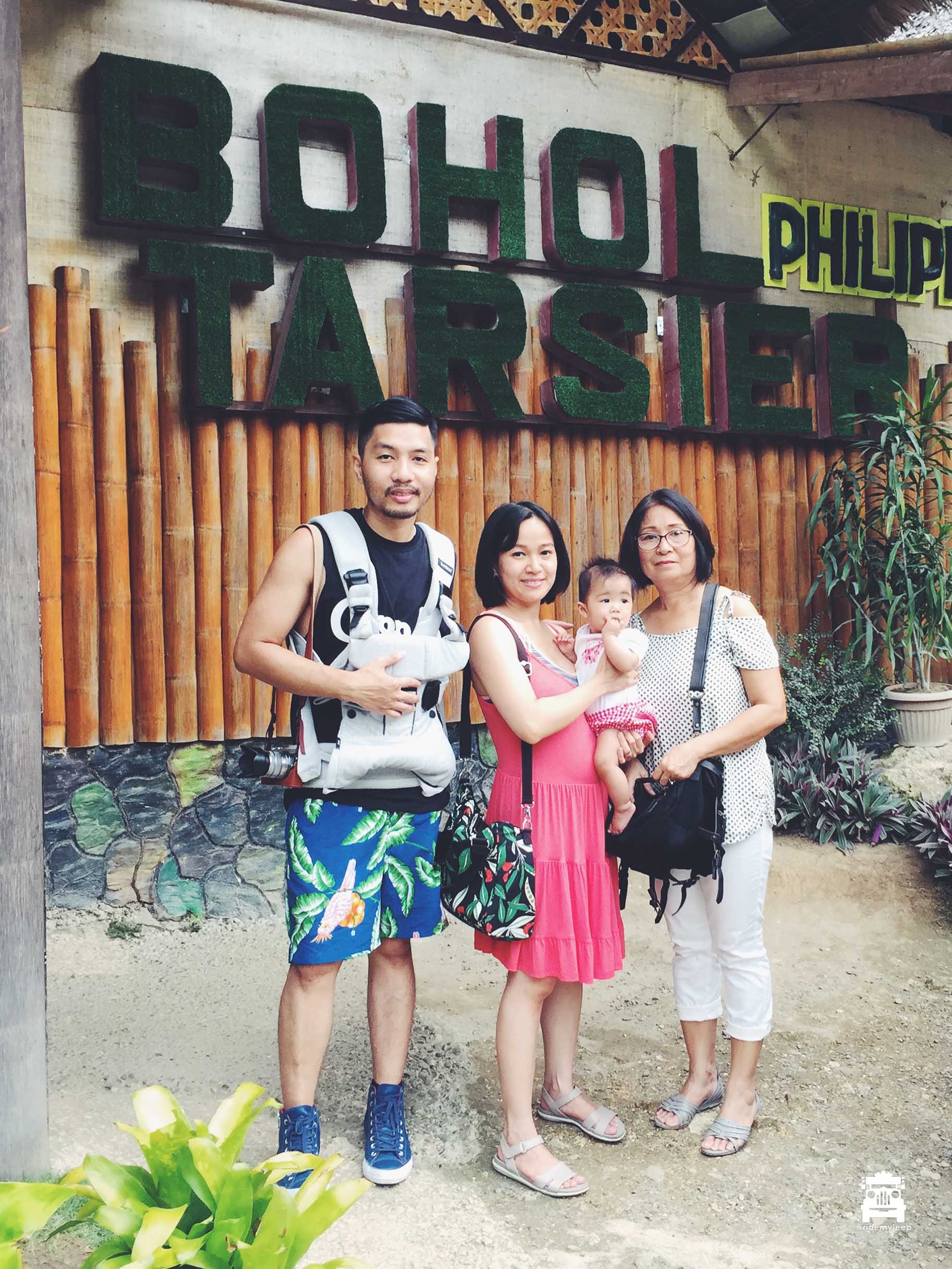 There were 214 steps to conquer before we could fully see the Chocolate Hills in all its glory from the viewing platform. With one hand holding an umbrella as a sun shield and the other cradling Bub, it was a challenge climbing the steps while dodging people making their way down and overtaking slow climbers taking their sweet time to reach the top. Upon conquering the steps, we were exposed to a 360 degree view of the Chocolate Hills. Hundreds of grass covered hills dotted the landscape. It got its name from the brown colour it takes on when the grass turns brown during the end of dry season. Most of the hills were still bright green though it didn’t lessen its magnificence. The natural occurring land formation still baffles geologists today as its origin has never been confirmed. There were plenty of people on the viewing platform and it was a task and a half to find a spot to take a decent photo with the hills behind us. The scorching sun didn’t make it any easier either. After some picture taking, we headed back to our air-conditioned van, a welcoming relief from the heat.

Lunch was included in the tour though it wasn’t just any ordinary fare, it was a buffet lunch in a floating restaurant as it cruised through Loboc River. As the first ones on board we managed to score a table right at the bow, which had the best view. We were also the first ones to try the food with no competing crowd. There were a few dishes served, poached fish, pork adobo (braised pork in garlic, soy sauce and vinegar), pancit (stir fried noodles) and chicken curry. I piled up my plate with food and returned to our seat where tall glasses of iced-tea were waiting for us. As soon as we sat down, the rest of the passengers arrived and flocked like seagulls around the buffet table.

Apart from the chicken curry which was the dish of the day for me, the rest of the food was quite average. “I can cook better than this”, boasting to Wifey. The food may not have reached our expectations, the cruise on the river totally made up for it. Cruising down the blue green water of the river, we could all feel the cool breeze on our faces. Both sides of the riverbank were abundant with trees of all kinds. I saw some local kids swimming in the water, some very eager to grab our attention by swinging on a rope tied to a tree branch, letting go and crashing into the water below. A singer on board serenaded us with a few songs. 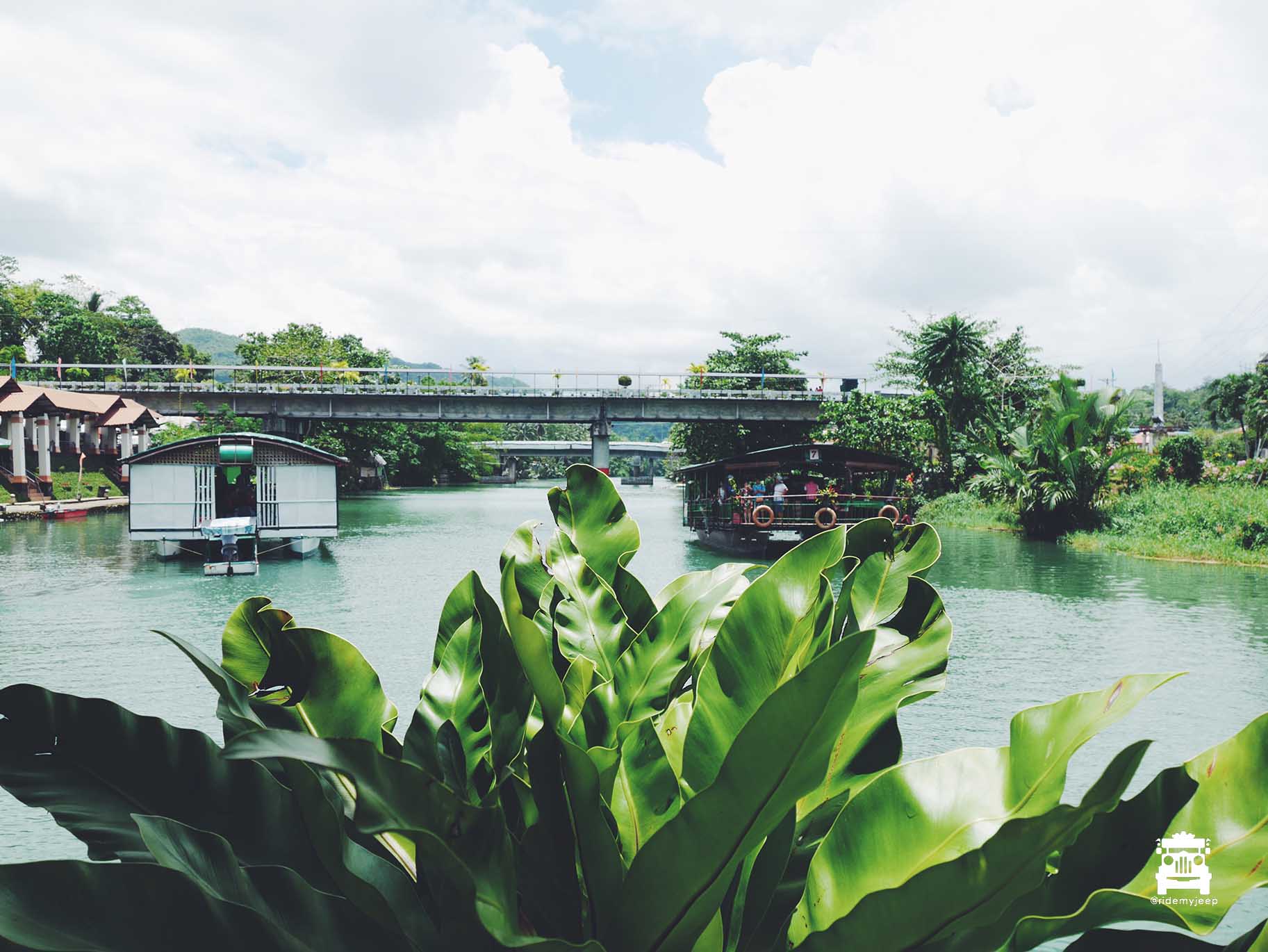 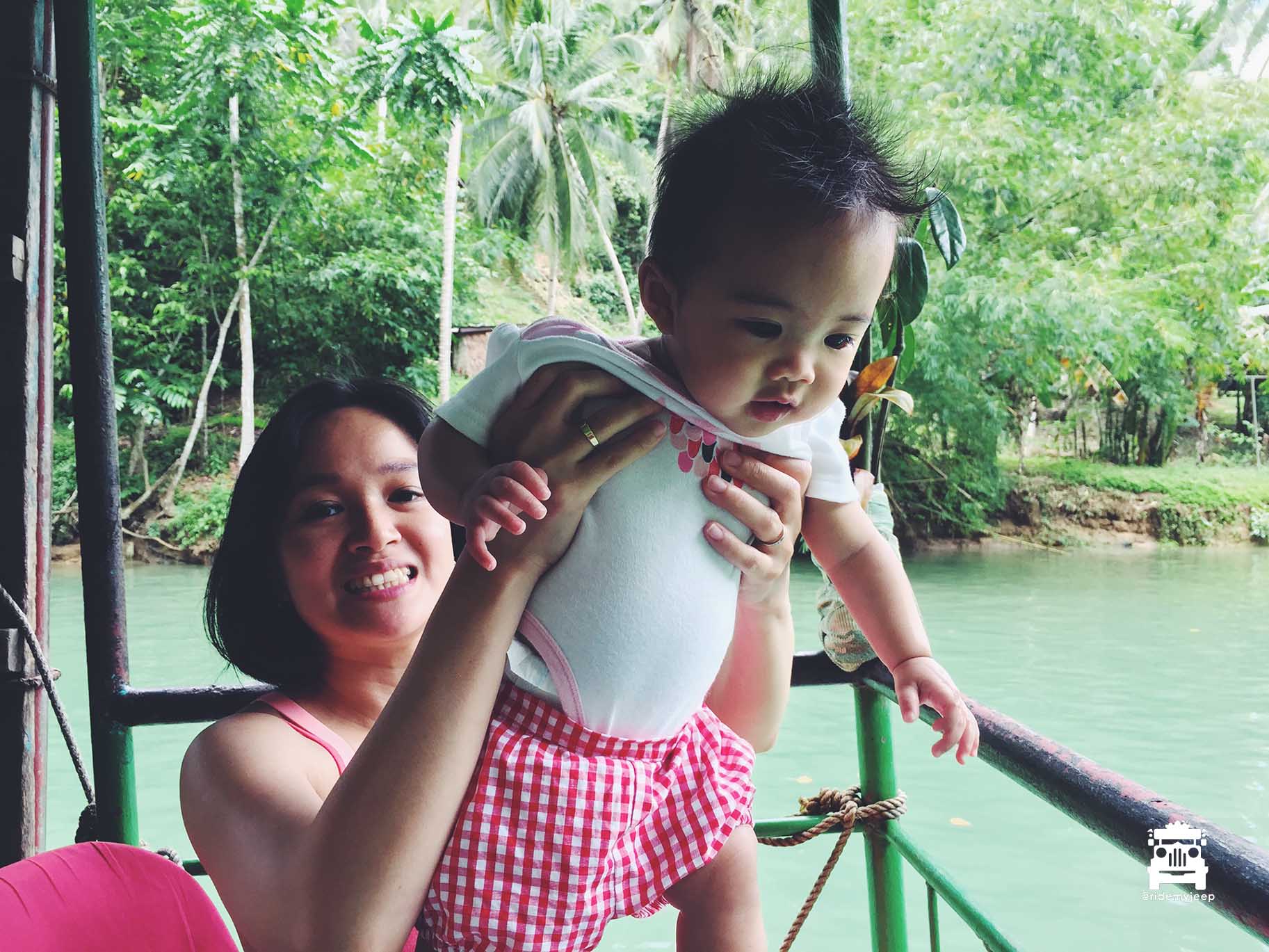 The boat stopped in front of a floating nipa hut that was anchored at the riverside. As the boat slowly drifted toward it I noticed the people on board, all dressed in traditional Filipino clothing. Colourful ukuleles hung in bunches on the ceiling. All of the passengers were encouraged to board the hut as the performance began but only a few including myself were “brave” enough to join the festivities. There were singing and dancing and at one stage the traditional Filipino folk dance tinikling was performed to the amusement of the crowd. The dance involved two bamboo poles held by a person on each end, tapping the floor with the beat while dancers step up and over the poles without getting their feet jammed when the poles collided. It was amusing to watch uncoordinated foreigners try their luck on the dance. They had fun nonetheless. 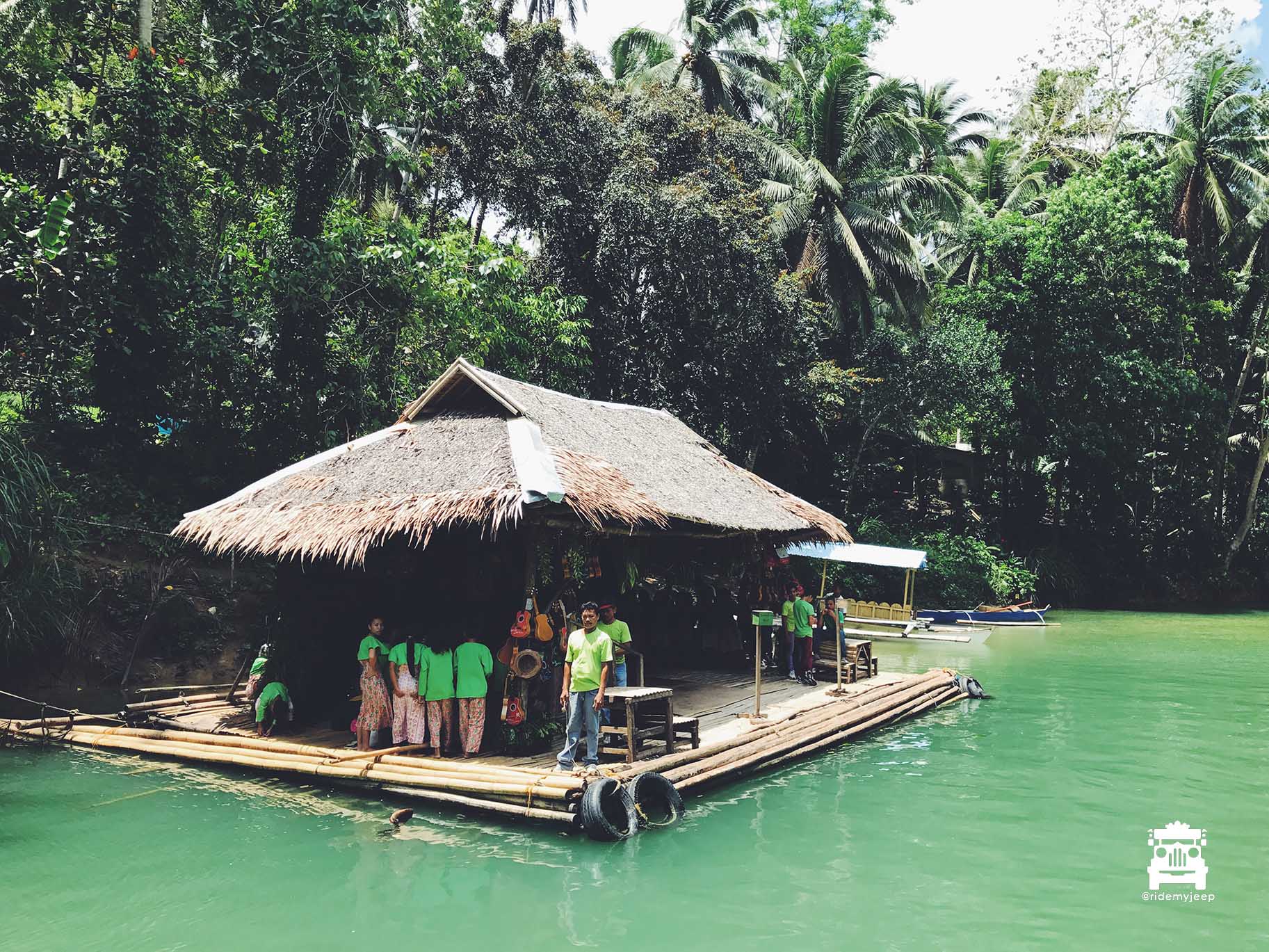 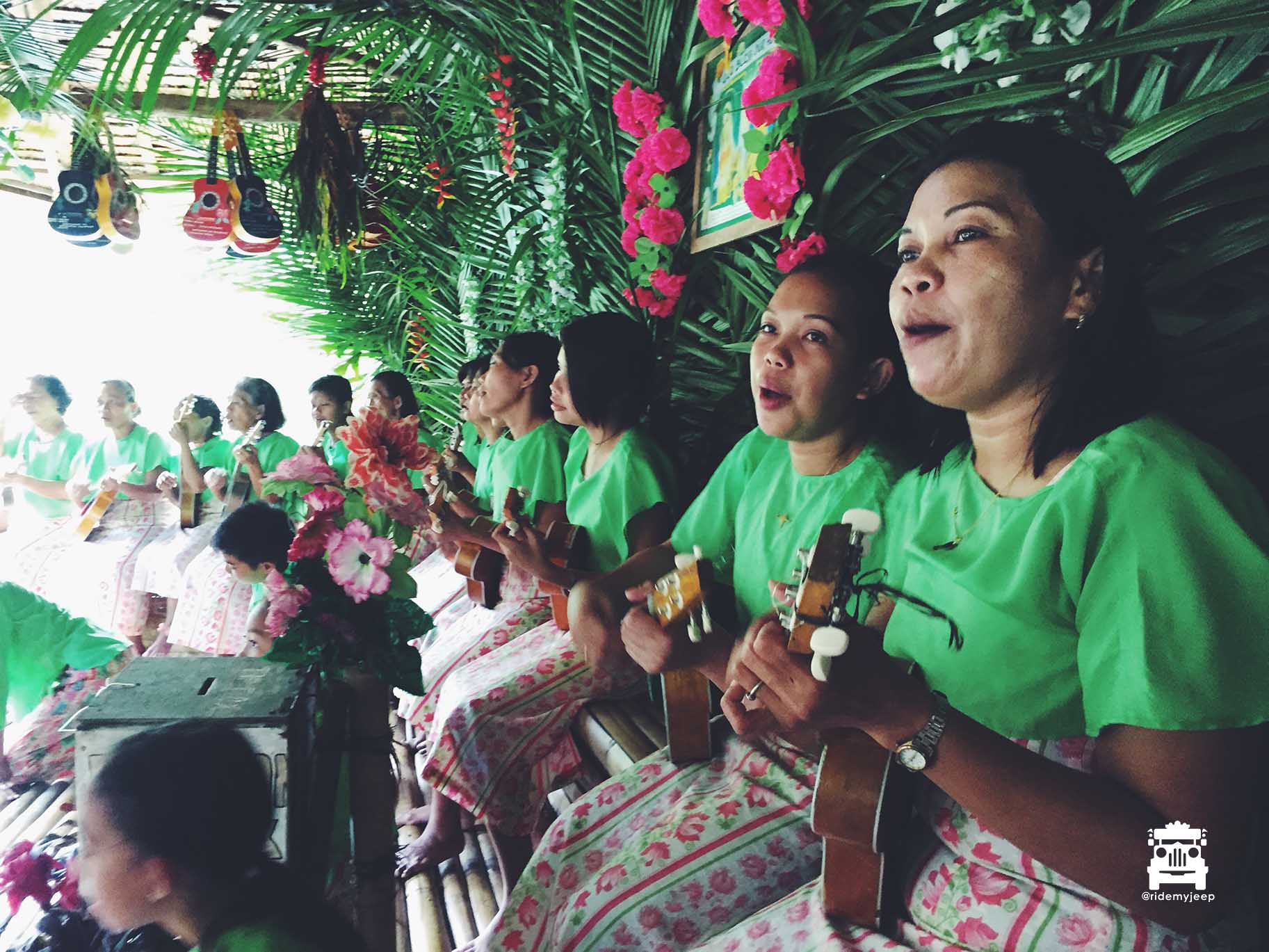 Upon reaching the turnaround point of the cruise, I managed to snap a photo of the lower part of Busay Falls which looked more like a rough stream rather than a waterfall as it was probably less than a metre high. The boat then made its turn and we casually headed back to where the cruise began. As we got closer to our destination, the singer on board moved from table to table holding his hat out for tips. I gave him a P20 (I could have sung better too :D).