From Sea Life to Seafood

As we stepped out of Osakako Station and made our way to Osaka Aquarium, we had some high hopes that Bub would enjoy the visit. I had included this day trip in our itinerary purely for her enjoyment. There were plenty of activities and places in Osaka that catered for young children and visiting the aquarium was one of the top things recommended by other parents online.

Bub was still asleep from the train ride when we reached our destination, missing out on seeing the huge Tempozan Ferris wheel that stood majestically in front of us. The aquarium building was equally impressive with its very modern structure of two trapezoid-shaped glass walls that reached up to its roof. “Can I get two tickets to the aquarium and the Ferris wheel?”, I asked the ticket attendant. It was Y3000 ($36AUD) per person and Bub was free. As soon as we entered the building, Bub was awoken by the noises coming from a large group of Japanese students, clearly enthusiastic about their school excursion. We decided to leave the stroller at the front desk as it would have been too difficult to manoeuvre through the sea of kids that were “joining” us that day.

There were plenty of species of fish to see. Coral fish were abundant, in all sizes, colour and shapes. From the tropical warm waters to the cold deep part of the ocean, the exhibits showcased the many weird and wonderful sea creatures in all their glory. The huge tank in the middle housed plenty of sting rays and sharks plus schools of fish that swam together like a single entity. It was also home to a few whale sharks, the biggest fish in the world. The amazing creatures swam slow but graceful. Gliding through the water without a care. “Kaka! Kaka!”, Bub shouted as she spotted the penguin enclosure (what penguins sounded like according to her). Mammals were also represented by dolphins, otters and seals.

One of the weirdest creatures that impressed me was the Japanese spider crab, the biggest in the world. Mimicking the shape of a spider, the crab with its overly proportioned legs compared to its body moved slowly on the bottom floor of its enclosure. It was bigger than Bub! “I wonder what it tastes like…”, I thought to myself.

Darkness consumed the jellyfish room. Many of the tanks only had enough light to see the beautiful creatures flutter through the water. It was mesmerising.

Right across the aquarium was Tempozan Harbour Village which housed a number of stores and more importantly, a food court where we decided to have lunch. Between us, we shared a pork katsudon and a roast beef dish with rice that I thought Bub would have liked. She wasn’t a fan of it. It was quite peppery, even for my liking however I was hungry enough to finish the meal.

“Would you like to wait ten minutes for a glass floor gondola?”, the attendant asked us at the Ferris wheel line. “No thanks!”, I immediately answered. We were then led to an opened standard gondola and boarded without delay. The ascend was slow and steady. The higher we were, the better the view of the harbour. Bub wasn’t so impressed. She was more interested in eating her Pocky snack, this time it was strawberry flavoured. 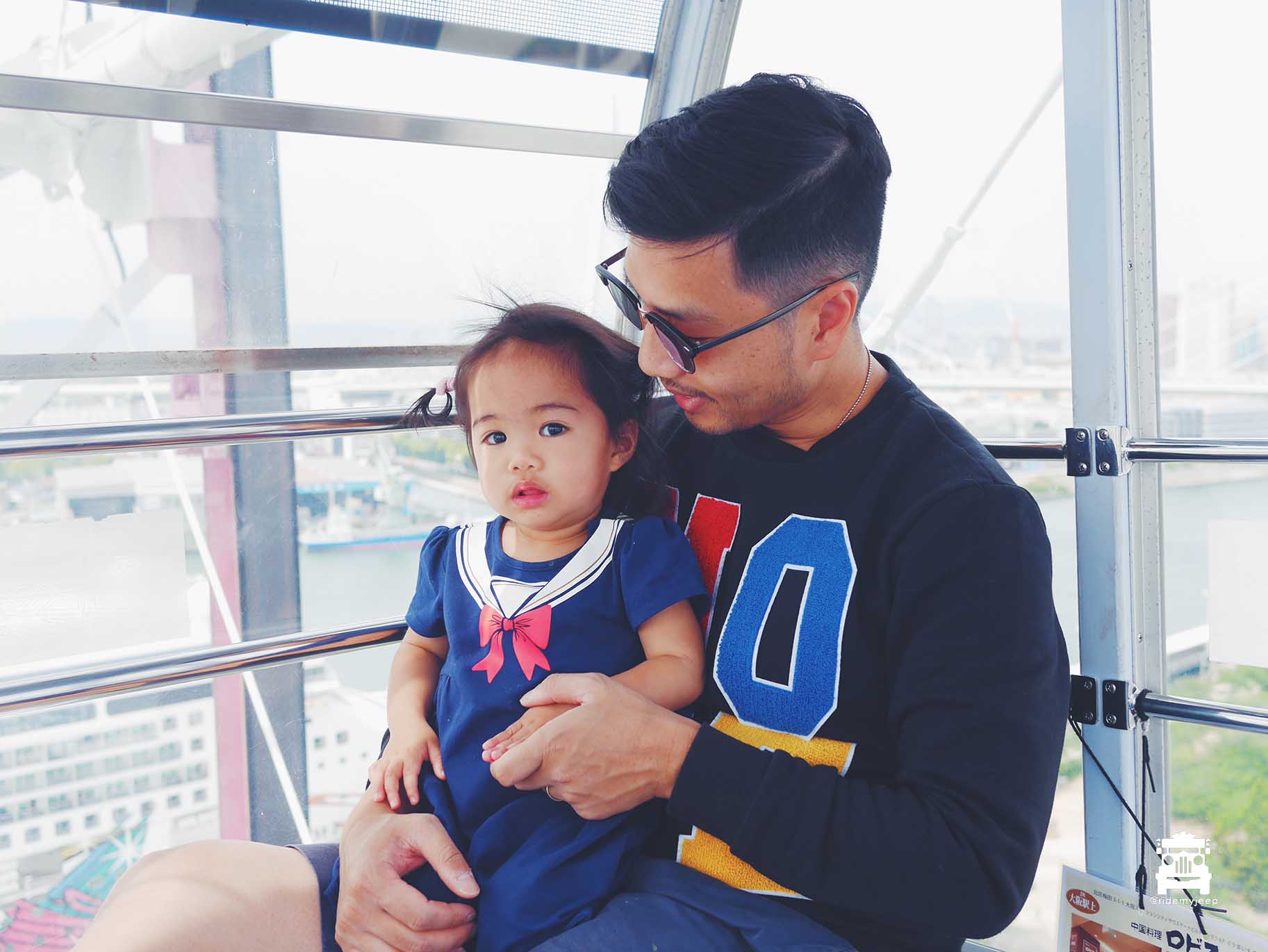 As we looked for a currency exchange teller within the Harbour Village, we ended up in a video arcade centre. There were plenty of games inside including a number of purikura or beauty photo booth stalls which peaked our interest since a number of our friends who had recently travelled to Japan had their photos taken in one of them and had hilarious results.

The busy halls of the aquarium was nothing compared to the streets of Dōtonbori, yet I was not complaining at all. I had been waiting since day one for this moment, to walk through Dōtonbori and see the Running Man Sign. We turned the corner to a bridge filled with people and alas! There he was with his arms up in the air, his left leg up in the shortest running shorts with a smile on his face. Around him were starstruck tourists mimicking his famous pose for a picture. I played it cool and took a simple selfie with him. He was only one of the cool billboard signs that covered the whole Dotonbori area. There were plenty of other cool and wonderful 3D signs that commanded your attention. A giant octopus hung over a takoyaki stall. A proud fugu (blowfish), all puffed up over a restaurant door could be perceived as a challenge or a warning depending on how game you were to trying it.

Since it was still quite early for dinner, we walked around to find a dessert shop that I had seen online called Poppin’ Sweeties that served rose-shaped ice cream, a novelty I was looking forward to showing Bub. As we continued our search, Bub fell asleep in her stroller, not disturbed by the live atmosphere around her. We managed to find the hole-in-the-wall shop, it’s bright yellow banner swayed silently in the air. I looked at the menu, choose three flavours for Y450 ($5.50AUD), matcha, vanilla and strawberry. The attendant then worked her magic, one petal at a time. She meticulously arranged the ice cream petals around the cone and in an instant she had created a masterpiece. A green, white and red-petalled rose. It was too pretty to eat. I took a couple of photos and handed it to Wifey. Bub was definitely missing out. The ice-cream flavour itself was ordinary, creamy but I’ve had better. Five stars for creativity, three for taste.

Looking for a restaurant that suited Bub’s palette had been a challenge on this trip, and today was no exception. We wandered cluelessly amongst the crowded streets, checking menus, mostly in Japanese which meant relying on the photos of food or the sampuru on display. When we think we had found a restaurant, we would second guess ourselves and then push on to find the “right” one. “Let’s try here”, I said pointing to a vending machine that displayed a pork noodle soup. You had to order and pay via the machine and then take the receipt at the front and wait for your order to be called out. The steaming soup came and from the smell alone, we knew Bub would be happy to eat it. I took out some leftover disposable cutlery from the flight so we could use it to feed Bub, the noodles being too long and needed to be cut with the knife. “More soup, more soup”, she demanded, slurping happily while she watched her favourite videos from my phone.

It was finally our turn to try some street food, going straight to the takoyaki stall to order. Two attendants were cooking side by side, one seemingly new to the task and had trouble shaping the takoyaki into balls. The other, way more advanced and had the technique down pat, moving from one ball to the other with great speed and precision. She placed 6 balls on a plate, drizzled it with sauce and mayo and then topped it off with katsuobushi or dried bonito flakes that seemed to have come to life from the heat, dancing in the wind. The first bite nearly burned my tongue as the hot gooey batter made its way into my mouth. I then got a taste of the piece of octopus in the centre, firm but not too chewy. It was delicious! Four stars for both presentation and taste.

Next in our list of food to try was okonomiyaki or Japanese pancake, made from flour, eggs, vegetables and sometimes with meat or seafood. We stumbled upon another stall that had pancakes already cooking on the grill. I ordered the seafood pancake. It didn’t take long for it to be served, the okonomiyaki drenched in sauce where the seafood pieces such as prawns, squid and mussels swam. The sauce was very similar to the takoyaki, sweet and salty. It was a pleasant dish, though I expected it to taste better deserving only three stars in my books.

Already full from the two dishes Wifey and I had devoured earlier (not including the leftover noodle soup from Bub’s dinner), there was one more dish to tick off the list and it was yakisoba or Japanese stir fried noodles. We moved away from the crowd and found a little yakisoba stall within an open food court. Upon ordering, the attendant started tossing some vegetables and prawns on the grill plate with oil. With his swift hands, adding some noodles and sauce and with a quick flick of his two spatulas, the dish was ready. He garnished it with some gari (pickled ginger) on the side and a sprinkle of katsuoboshi. While still warm, Wifey and I took turns in eating the moorish dish until there was nothing but an empty plate.

With our bellies full and spirits high, it was time to say farewell to the bright lights and bustling streets of Dotonbori. It was a great way to end a tiring but memory-filled week in Japan. Sayonara Osaka! Next stop, Taiwan.