Day Trip back in History

Getting to Miyajima Island

“The bullet train is here!”, Wifey declared as I scrambled to get my camera to focus but I was too late. I was too busy filming the led sign above flashing the train time to Hiroshima. We managed to secure a row of seats to ourselves and without delay, the bullet train was off to our next destination. This was going to be one of many commute trips we were going to take to get to Miyajima Island.

Halfway through the journey, Bub fell asleep which gave us a chance to purchase something from the snack cart that was being pushed along the aisle by an attendant. I was feeling thirsty at that moment and so I chose a bottle of Coke, but not just any normal Coke, Sakura Coke. The pink bottle was covered with sakura (cherry blossoms) patterns. “I wonder what this will taste like…”, I pondered as I twisted off the cap and with one quick sip, I found out. I was deceived. It was just normal Coke! Wifey and I tried to control our laughter to a minimum, making sure Bub’s slumber was not disturbed.

Upon reaching Hiroshima Station, we were off to find the platform for the JR Sanyo Line bound for Miyajimaguchi Station. “Can we get some donuts?”, I asked smiling as I spotted a Mister Donut store within the station concourse. Donuts of all kinds were displayed behind a glass cabinet. Their glaze glistened enticingly under the lights. We opted for the mini donuts, perfect size for Bub’s little hands. After a short wait at the platform, we were on the train once again. Bub, happily munching on her sweet treats while I admire the view from my window seat. The closer we got to Miyajimaguchi, the nearer the shoreline behind the houses appeared.

It was a quick walk from the station to the pier where the ferry was waiting for passengers (including us) to board. There was no need to purchase tickets as the JR pass covered the fare. We were all quickly ushered onto the ferry, Wifey instantly noticing a room especially for the elderly and those who were travelling with babies and children. The boat had set off as we settled in our seats. “Nearly there…”, I thought to myself. Bub kept herself busy by playing with my toy jeep. Minutes passed and suddenly we had reached the island. While the boat made its way to the dock, I could already see the huge torii gate standing in the middle of the sand, surrounded by people. It was definitely low tide.

“This place is beautiful”, I said to Wifey as soon as we stepped out of the ferry terminal. The path led us to an open-spaced area. A section of it, shaded by wisteria vines in bloom that grew over wooden pillars and beams. A wild deer appeared sniffing the ground for food. More deers crossed our path on our way to the torii gate. The great Torii of Miyajima stood 16 meters, the visitors below dwarfed by its enormity. We left our stroller beside the steps that led to the beach and made our way toward it. It was near impossible to take a decent photo due to the crowd and some parts of the sand were still very wet and soft to stand on. The gate was the entrance to the Itsukushima Shrine, built over water in 1168. 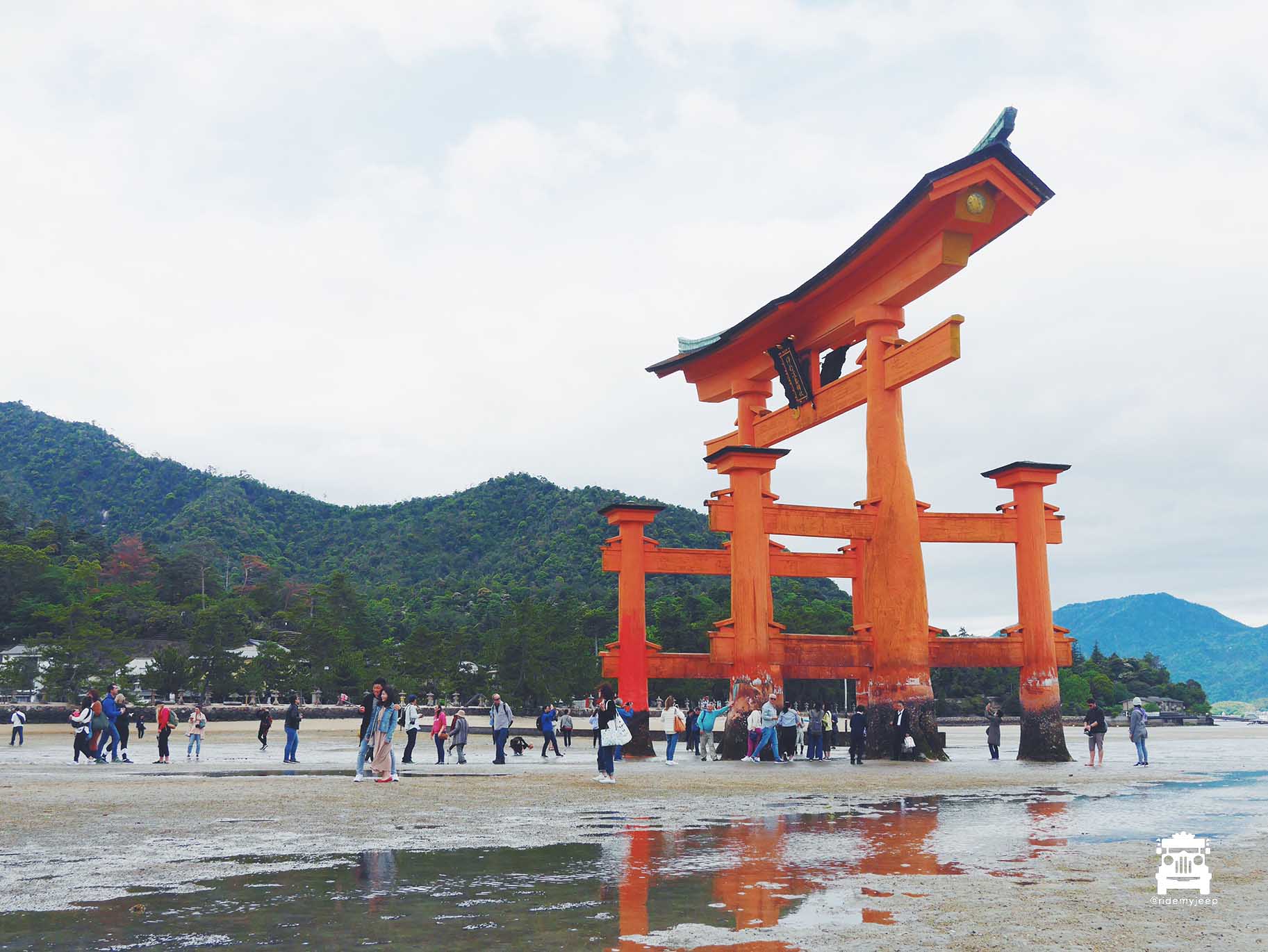 The island as a whole was stunning. You could count the cars driving down the narrow streets lined with quaint Japanese houses with the mountain in vibrant green colour as the backdrop. A clean stream of water snaked through the village, the sound could calm even the grumpiest of mood. “How’s the serenity?”, I asked myself. 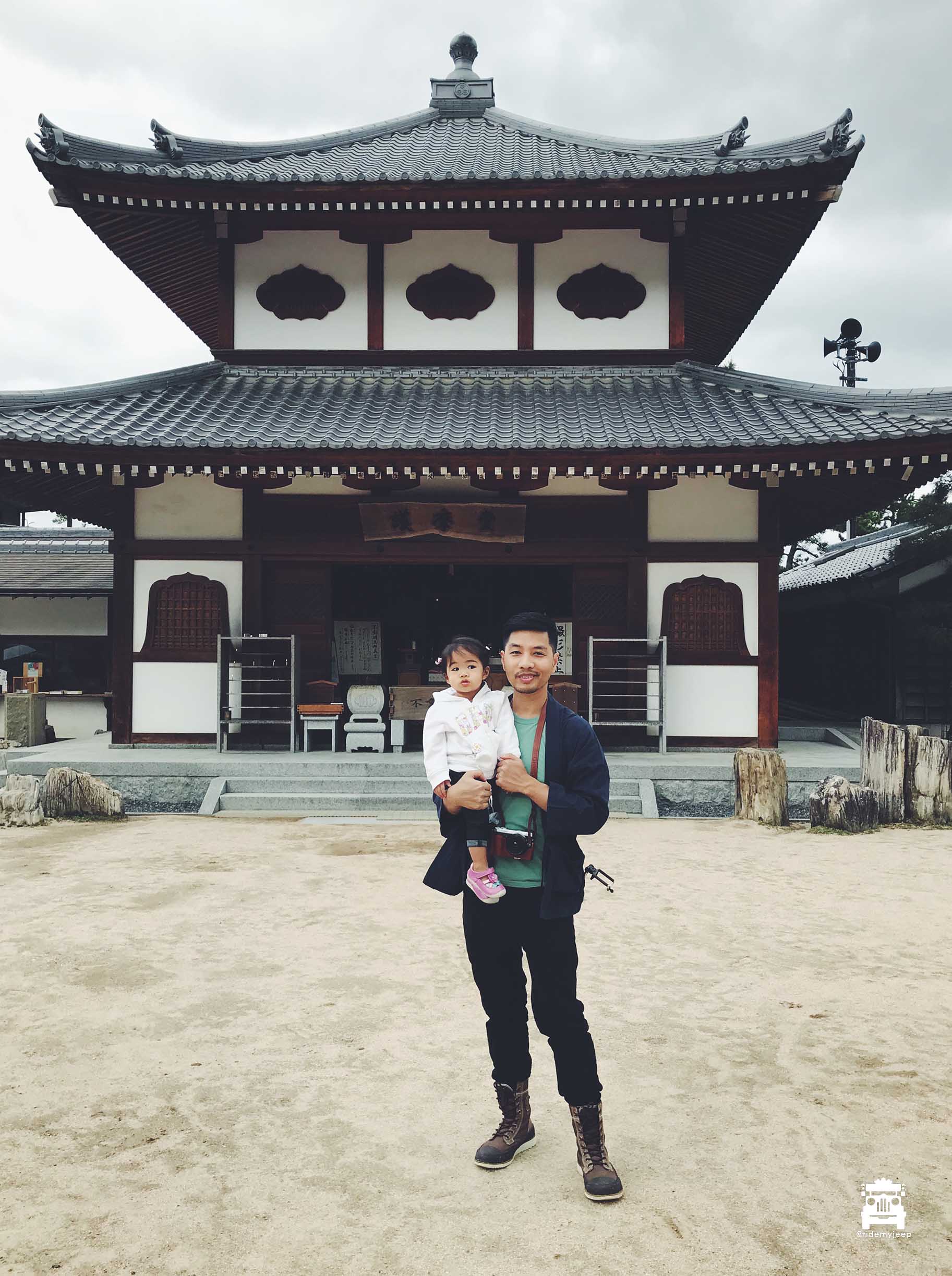 On our way back to the ferry we stopped by a barbecue food stall. A selection of skewered meat, displayed at the front for easy picking. “One chicken, one corn and one takoyaki”, I said while pointing to make sure the food stall attendant got my order right. He then put our skewers on a hot grill and within a few minutes it was ready. We sat on a bench right next to the stall and as I was handing over the corn to Bub, an overzealous deer got hold of a plastic bag hanging from the stroller, pulling it towards itself. I managed to wrestle the stroller away as it was about to flip with Bub still strapped on and ran as far away as possible. We cautiously ate the rest of our food, as quickly as we could before any other deer decided to join us. 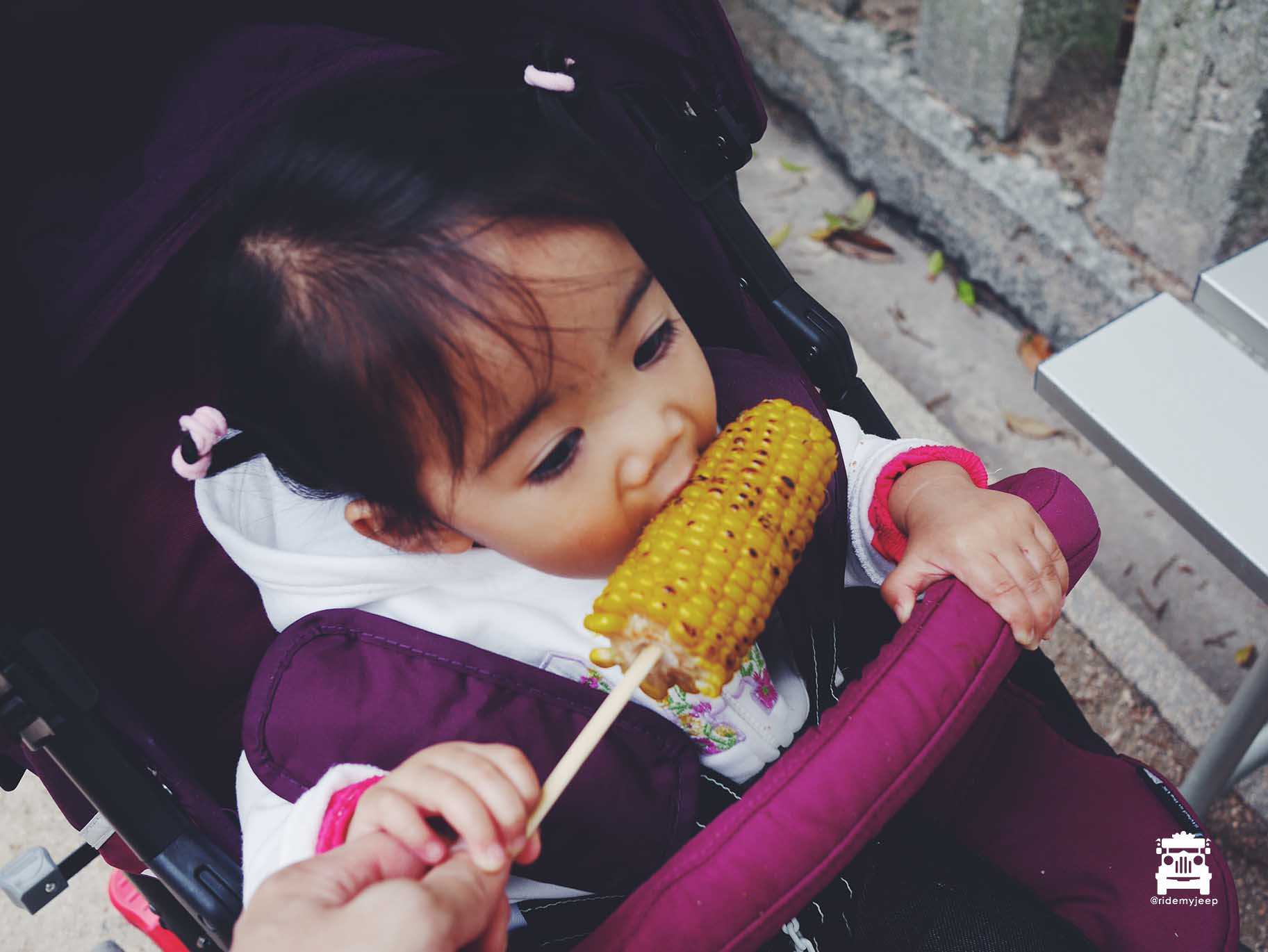 It was already 3pm when we made it back to Hiroshima Station from Miyajima. As tired as we were, we decided to push on and not leave Hiroshima without seeing the A-Bomb Dome and the Peace Memorial Park. From the station, we took a tram (no. 2) to Genbaku-Domu Mae Station (Y180 per person).

Both Wifey and I stood in silence as we walked toward the A-Bomb Dome, one of only a few buildings left standing when the bomb was dropped in 1945 during World War II that killed 80,000 people. The ruin was surrounded by bushes that blossomed thousands of flowers in varying hues of purple, pink and white. A flower for every soul, I thought. It was a bittersweet sight.

We continued our stroll across the river which led us to the Peace Memorial Park. Our first stop was the Memorial Cenotaph or the arched tomb that housed the names of those who perished. I waited in line to give my respect. Behind it was the Flame of Peace, only to stop burning once the world is rid of nuclear weapons.

At the Children’s Peace Monument, we witnessed hundreds of students waiting their turn to offer their one thousand paper cranes to commemorate Sadako’s legacy, one of the most well known hibakusha or victims of the explosion. Before dying of leukaemia due to radiation exposure at the age of 12, she managed to fold more than one thousand paper cranes which in Japanese tradition, granted you a wish. Her wish was a world without nuclear weapons. Even though I could not understand what the students were solemnly saying in Japanese, I could feel their sincerity in their voices. A statue of Sadako holding up a paper crane above her head stood in the middle of the monument, surrounded by see-through cases filled with paper cranes in all sizes and colour. 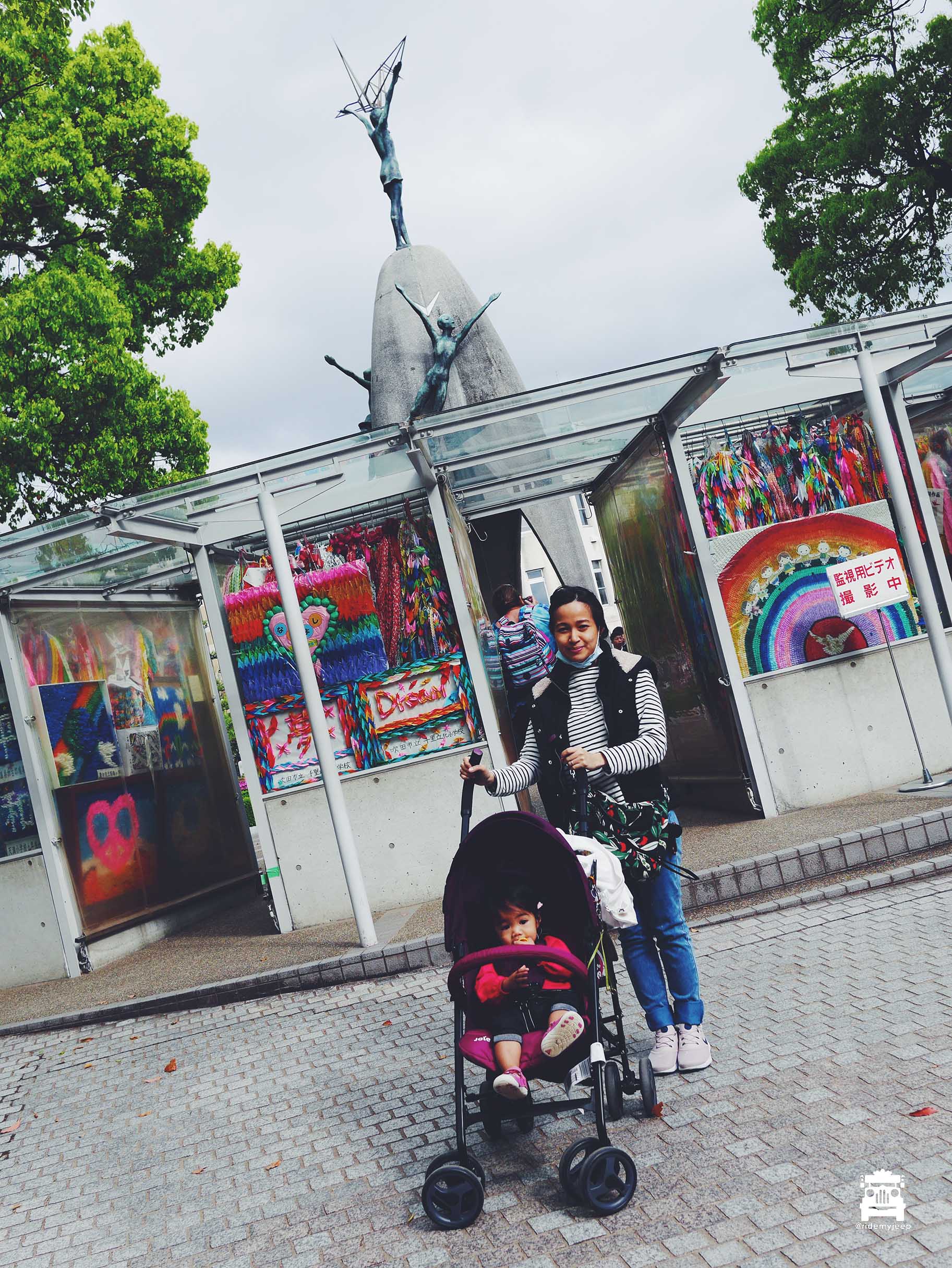 After a quiet stroll through the rest of the park, it was time to head back as we knew we still had quite the journey back to Osaka. We ended up boarding the wrong tram back to the station which set us back nearly an hour of travel. The bullet train ride to Osaka felt a lot faster and by 7:30pm we were back at our hotel. After a quick dinner of spaghetti and Margherita pizza at Saizeriya, it was time to call it a day.