“We’re definitely prepared”, I said as we walked down the street, sporting our new pairs of navy gumboots, we had purchased prior to flying to Japan. I checked the advanced weather forecast and there was a high chance of rain during our stay and wanted to make sure we were ready to explore even in the wet. It was yet to rain, though we didn’t stick out too much in the crowd as most of the people we passed were holding umbrellas. At one point, Bub dropped one of her cute pink gumboots without us noticing and a kind lady hurriedly approached us to return it.

From Osaka Station, we took a train bound to Nara on the JR Yamatoji Line (covered by our JR West Pass). The heavens opened up during the ride and in that moment I knew it was going to be tricky for us since we had brought our stroller along. As soon as we reached Nara Station, the harder the rain fell. Luckily for us, we brought two umbrellas, one that I always had in my bag and the other borrowed from our hotel reception. I managed to wedge the umbrella handle through an opening on the side of the stroller, fully covering Bub who was busy eating Pocky (Japanese chocolate covered stick biscuits). The shade was transparent allowing her to still have a view of the surroundings and the rain droplets forming on the surface.

“Deer!”, Bub cried out as she spotted her first upon entering the park. The rain didn’t seem to bother the deers at all. Wifey approached a doe with caution, grabbed some leftover bread from her bag and slowly offered her hand towards it. In a split second, the bread had disappeared into the deer’s mouth. “Ok, that’s all”, Wifey stated, stepping away from the animal. The deer wasn’t convinced, bowing its head as it followed Wifey around which she wasn’t too happy about. I thought it was hilarious.

A crowd gathered around a shop where they sold deer biscuits for Y150 ($1.80AUD). I purchased a pack and quickly hid it in my pocket before any of the deers could see or smell it. It was quite the challenge holding Bub and an umbrella while my other hand reached out holding biscuits feeding a deer that suddenly turned into three hungry mouths coming at every direction! I managed to keep them more than an arm’s length by running away. Wifey used her umbrella as a shield. One visitor wasn’t so lucky, overwhelmed and cornered by a pack of deers with no choice but to abandon his biscuits.

The rain didn’t show any signs of stopping at all and we were getting quite wet (apart from our feet though, thanks to the gumboots). “Let’s have some lunch”, I suggested. We made our way back to the city centre, passing by Kōfuku-ji Temple and its five storey pagoda, the second tallest in Japan. 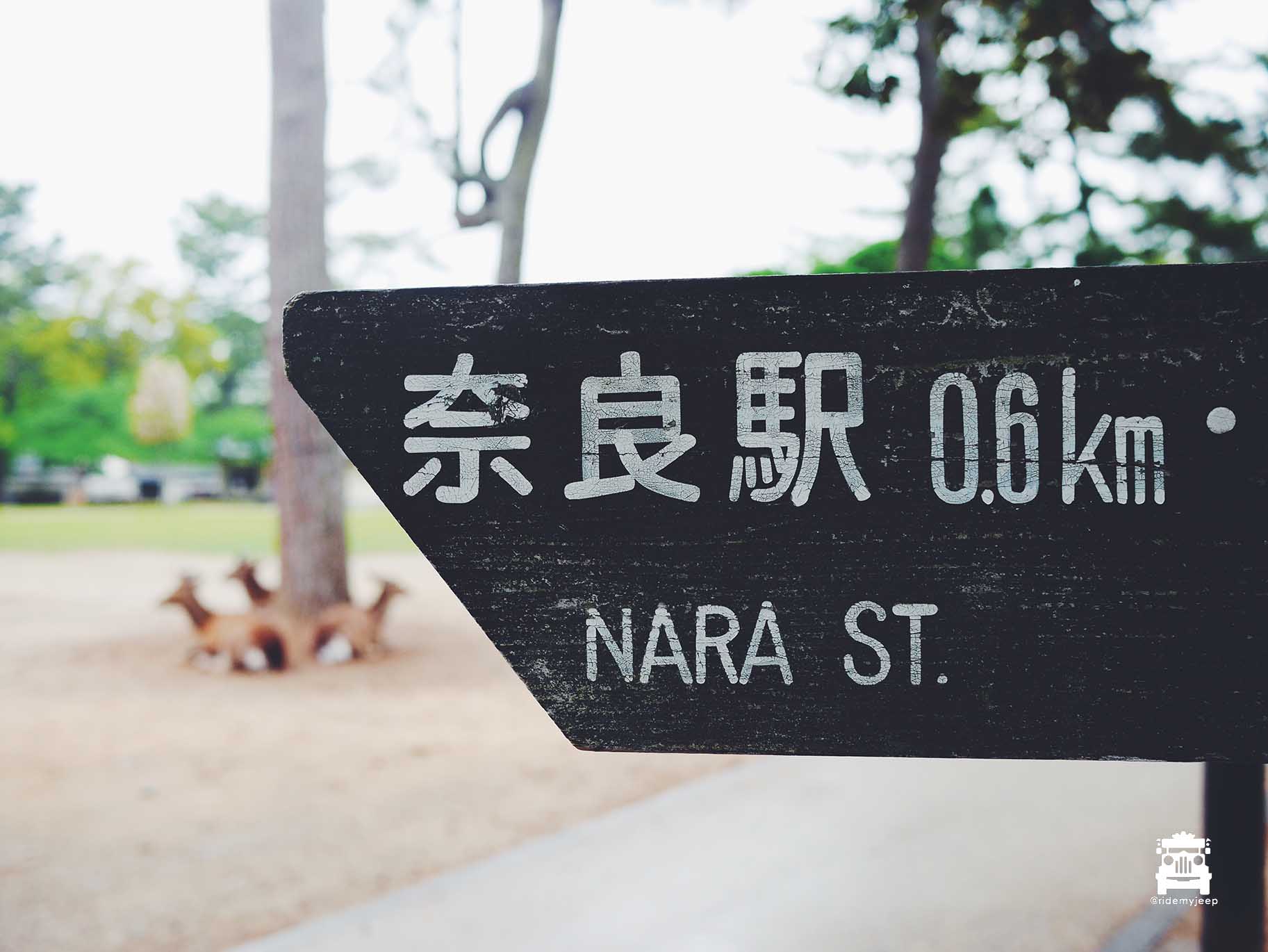 The covered outlet malls that lined the main streets of Nara proved the best place to be out of the rain. It was also the perfect location for scouting restaurants. A little clothes store stopped us in our tracks with a rack of kimono outfits for children. The price was reasonable compared to other stores we had seen previously and so we purchased a pink one with cherry blossom patterns for Bub. “Off! Off!”, she shouted tugging on the jumper she was wearing, clearly excited to showcase her new threads.

After much deliberation, we chose to eat at Com Ngon, a Vietnamese restaurant. I immediately ordered the grilled pork with rice and a bowl of beef pho, two choices that would hopefully satisfy a fussy eater who was getting a little grumpy due to hunger. The restaurant was quite busy that day and so we had to wait a little longer for our food to be served. The grilled pork flavour was spot on. It was smoky and salty. Dipping it in the sweet nước chấm sauce elevated it even more. I was disappointed on the cut of meat they chose. There was plenty of cartilage that had very chewy parts. The pho was thoroughly enjoyed by Wifey and Bub. Three stars for both dishes.

It was still raining when we finished our meal and so we decided to call it a day. As much as we wanted to explore Nara more, it was proving to be very difficult due to the wet weather. Bub fell asleep as we walked back to the station. It was a quiet train ride back, the weather dampening our mood.

Feeling refreshed after a much needed nap, it was dinner time again. The rain had eased slightly. With our jackets and gumboots on, we went searching for another place to eat. Wifey was once again craving for some yakiniku (grilled meat) and Gyu-Kaku was one of the closest restaurants near our hotel that served it.

We ordered some wagyu beef and pork belly and a half serve of sesame ramen. The waiter carefully placed a portable grill filled with hot glowing coals on the table. “Check out that marble,” I said as picked up the wagyu beef pieces and placed it over the grill. Wifey was busy wrestling Bub down who was more interested in checking out the grill rather than eating her noodles. I got my phone out and played her favourite shows to keep her still. The food was delicious. Meat was tender as expected. Four stars for the food, one star for Bub’s misbehaviour. 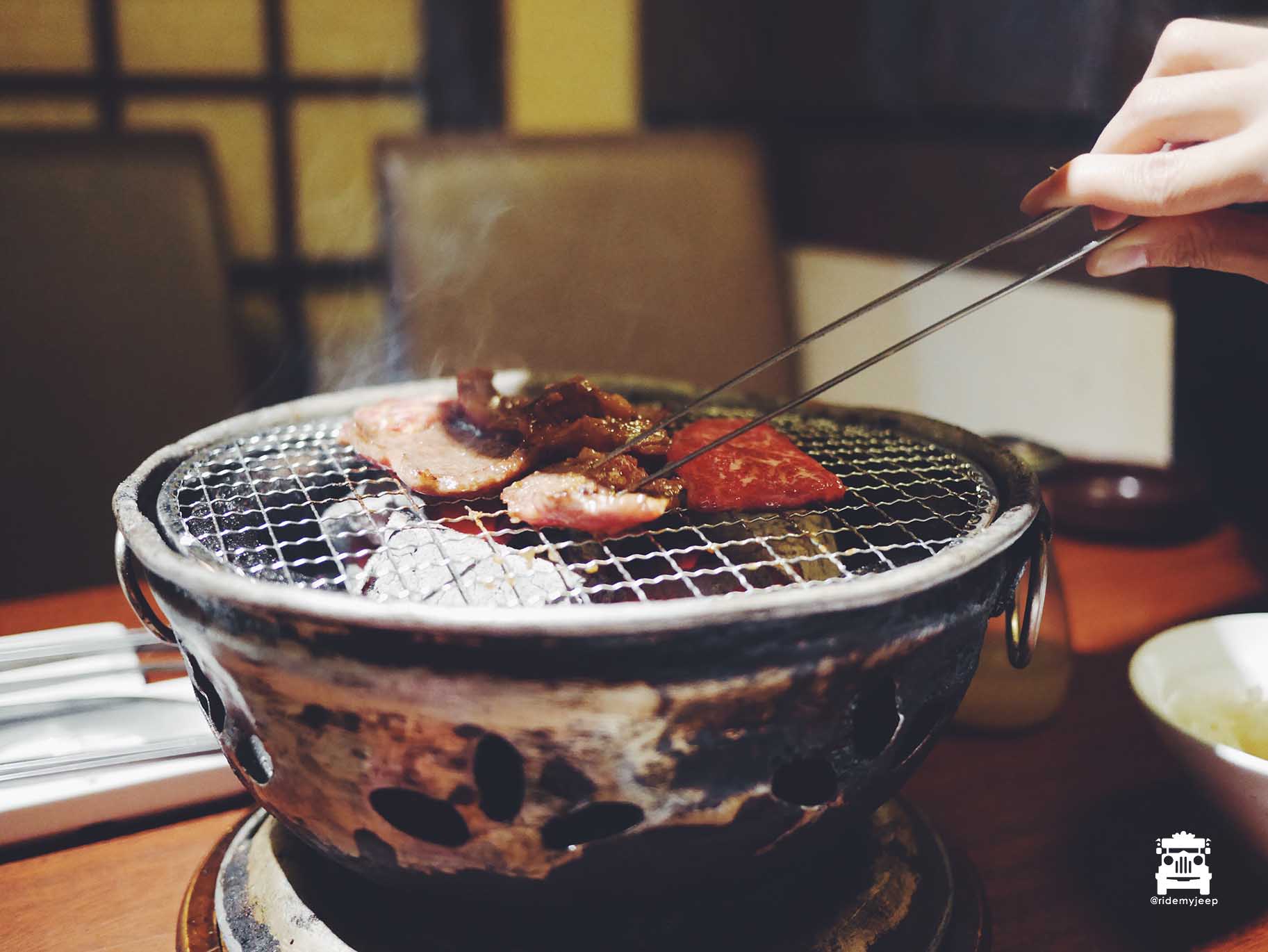 It was a long walk back to our hotel. Bub had to make sure she had thoroughly jumped on every single puddle she came across (thank you gumboots!). We stumbled upon a taiyaki stall serving fish-shaped bread. While waiting to order, I observed how it was being made. Batter was poured over half a fish mould. The filling was to go next on top then the other half of batter slathered over it, finally encasing the whole thing with the second half of the mould and then cooked over a hot grill. I ordered both the red bean and sweet potato filling. We sat on bench enjoying the toasted taiyaki that warmed not just our belly but our hands at the same time.

The rain did dampen our day and our plans of exploring a lot more of what Nara had to offer, however it just gave us another reason to come back – hopefully with a lot more sunshine next time.