It was our third day in Hong Kong and this day was supposed to be allocated for a day trip to Macau. Due to unforeseen circumstances, and really last minute preparation, we decided it was not going to happen.

“Let’s check out Mong Kok instead”, I said and so we made our way to the subway near our hotel to catch a train to our next destination. It didn’t take long until we reached Mong Kok, another district in Hong Kong well known for its shopping.

Due to the impromptu decision to visit Mong Kok, I had quickly googled some interesting places to see just before leaving our hotel. One place that stood out and I thought would peak some interest for Bub was to visit the Goldfish Street/Market.

We had arrived in Mong Kok just before lunch and the heat of the sun was already intense. As we made our way toward the street, I knew that it was only going to be a quick visit as we had to get out of the sun as soon as possible.

“Fish!”, Bub shouted as I wheeled her pram toward one of the tanks filled with hundreds of goldfish. There were plenty of variety and species on display. Goldfish were red, black and white, some spotted and others goggle-eyed. Fighting fish in their separate mini plastic tanks hung side by side on a wall. Colourful tropical fish in all different shapes and sizes were also available for purchase.

If you were up for a bargain or cheap souvenirs to take back home, you would find it at the Ladies’ Market. The streets were lined by stalls on both sides. They sold clothes, accessories and knick knacks, whatever you could think of, they probably had it. Due to the heat of the sun, foot traffic through the market was considerably less. Wifey was not after any clothing. She only stopped once at a fruit stall to buy Bub some grapes.

I wasn’t really sure what this restaurant was actually called as it was in Chinese, however the number 22 was in big bold font on its sign. The menu plastered outside the restaurant had dishes in English and so we knew it was going to be easy enough to order. I ended up ordering the pork knuckle dish hoping it would taste similar to “humba”, a Filipino dish that used the same cut of meat, stewed in a very sweet and salty sauce. Wifey went with the safer option of crispy roast duck on rice to share with Bub.

“I should have ordered something else”, I regretfully said to Wifey after the first mouthful of pork knuckle and rice. While it looked like it was going to have a lot of flavour, the dish was too subtle for my liking. There was no kick to the sauce it was very light. The knuckle’s flesh wasn’t as glutinous as what I would expect for a dish like this. I ate as much as I could as I didn’t want to waste it.

WIfey’s duck dish was a different story however as she fully enjoyed tucking in to the crispy duck. There was enough sauce on the rice to compliment the duck and the pak choy on the side added another texture and freshness to the dish. Bub was again very picky and did not eat enough food from either our plates and so we were again in search of another place to satisfy not just her hunger but mine. Two and a half stars.

Even though we had it the night before, seeing another Jollibee restaurant gave me much comfort. It was familiar and we just knew that Bub was going to eat without hesitation. We ordered the sweet spaghetti with chicken for her and I got the cheeseburger. As simple as the burger was, it was the taste that I missed.

To escape the heat once again, we entered Langham Place which was a stone’s throw away from Jollibee. At the entrance stood a sculpture of a stick man, its limbs bent weirdly in all directions. Inside the mall, two huge sculptures depicting tornadoes towered over the main lobby.

After a quick stroll around the shops, we ended up around the food court area where iCremeria took our attention. While the scrumptious desserts intricately decorated and displayed in their cases were already a sight to see, it was the gold-leafed soft serve being handed over to an excited customer that was more intriguing. I looked at the sign and for HK98 or $17.50 AUD, you would get to know what gold taste like. For a split second I thought of purchasing one “for the ‘gram”, however I changed my mind and ended up ordering two desserts for around the same price. The matcha ice-cream was sweet with a little hint of bitterness from the warm matcha latte that was poured over before serving. Bub ate all the berry decoration on top of the strawberry roll, leaving us with the cream-filled cake which was nice nonetheless. Four stars for presentation, three stars for taste.

Our main goal that evening was to find a Filipino restaurant so Bub could eat something other than fast food. Google had pointed us to one at Wan Chai district, two subway stops away from our hotel. The streets were typically busy, plenty of cars and pedestrians contributing to the noise and the night life.

On our way to the restaurant, we stopped by an alley that had red lanterns in all sizes strung up above it. We took advantage of the setting and took some pictures. 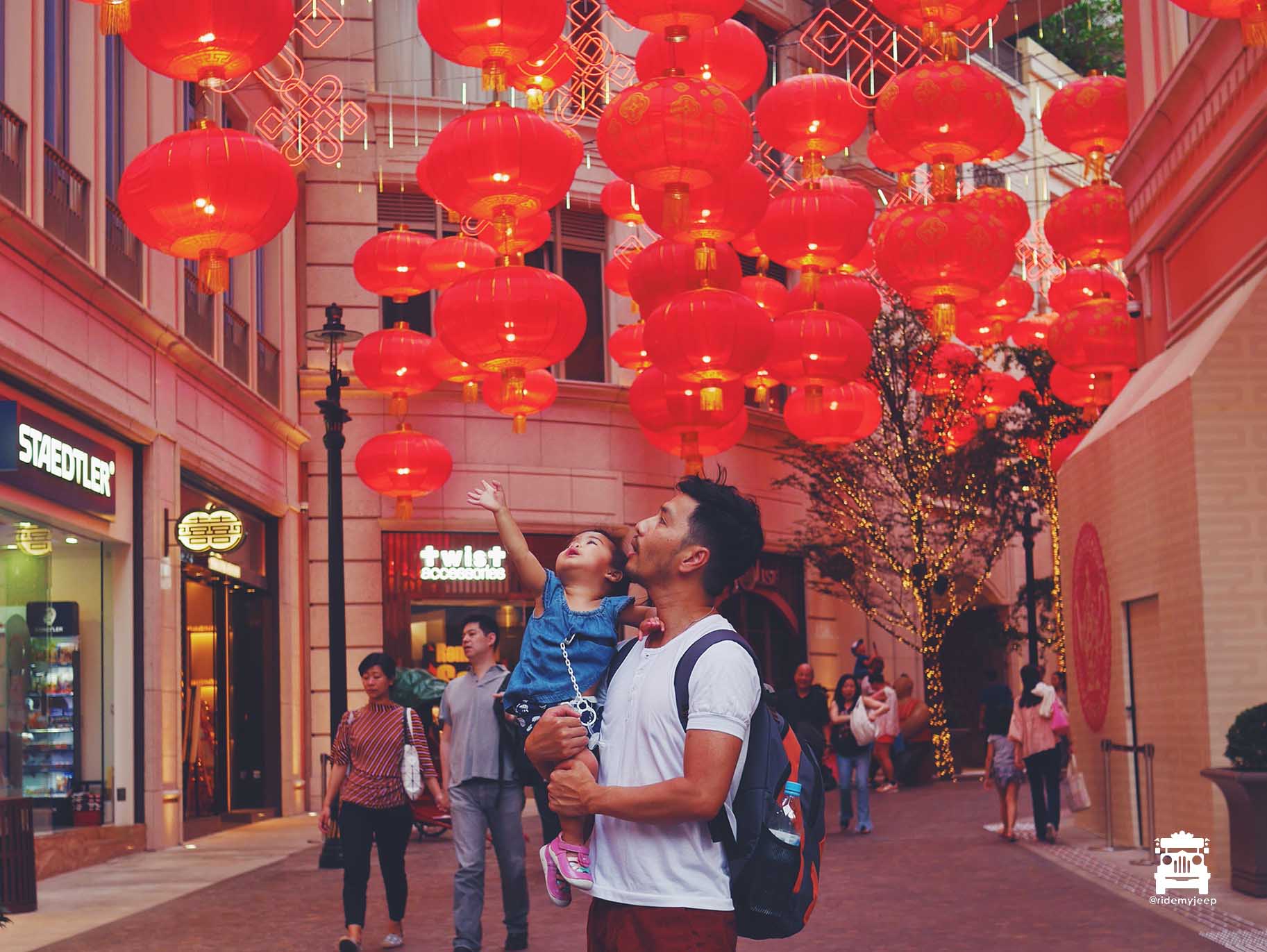 “We’re the first customers”, I said to myself as we entered the restaurant, disturbing the old lady inside who was watching a Filipino drama on TV. “Hello po”, I said to her and she welcomed us by guiding us to our seat. “Ang cute naman ng bata (Your child is cute)”, she said smiling toward Bub. She handed us a menu and within a minute we knew what we were going to have.

The steaming tinola came first. I could smell the ginger broth as soon as she placed the dish on our table. I swirled the soup around to expose the chicken pieces in bones (where the flavour comes from). Next came the adobo, one of the most famous Filipino dishes. Each family has their version or way of cooking it. This version was tasty. The chicken and pork pieces were drenched in sticky sauce from reducing soy sauce and vinegar, adding sugar to balance the flavour. It paired perfectly with the rice. Bub couldn’t get enough of it. “More adobo”, she would say after every spoonful. The tinola broth was refreshing and the slow-cooked green papaya added some sweetness to the dish. We all agreed it was a delicious dinner. Four stars.

From Wan Chai we headed next to Central district to ride the Observation Wheel that we spotted the night before across the harbour from Tsim Sha Tsui during the Symphony of Lights. It was a fair walk from the Central Station to the harbour where the wheel was located. The walkway above the streets were very convenient, bypassing the traffic below.

The price per adult was HK20 ($3.60AUD), kids under 3 were free (score!). The line to board wasn’t that long, however it was a very humid night and even just standing in line I felt my sweat dripping behind my back as I carried Bub who refused to stand on her own.

We shared a carriage with four Japanese guys (I overheard their conversation and it sounded Japanese). One of them tried to make Bub smile by saying hello but she was too shy to reply back. The wheel slowly turned and our carriage began to rise, giving us a panoramic view of the city and the harbour. Pretty lights flickered from the distance horizon, the city was definitely alive that night.