It was a quite an effort to reach the Peak Tram Lower Terminus as it was situated up high on a sloping street. I also had to carry Bub the whole way as it was not recommended to bring a stroller in the tram ride itself. The humidity was already high and it was only around 10am in the morning and so I unwittingly worked up a sweat climbing the steep street. 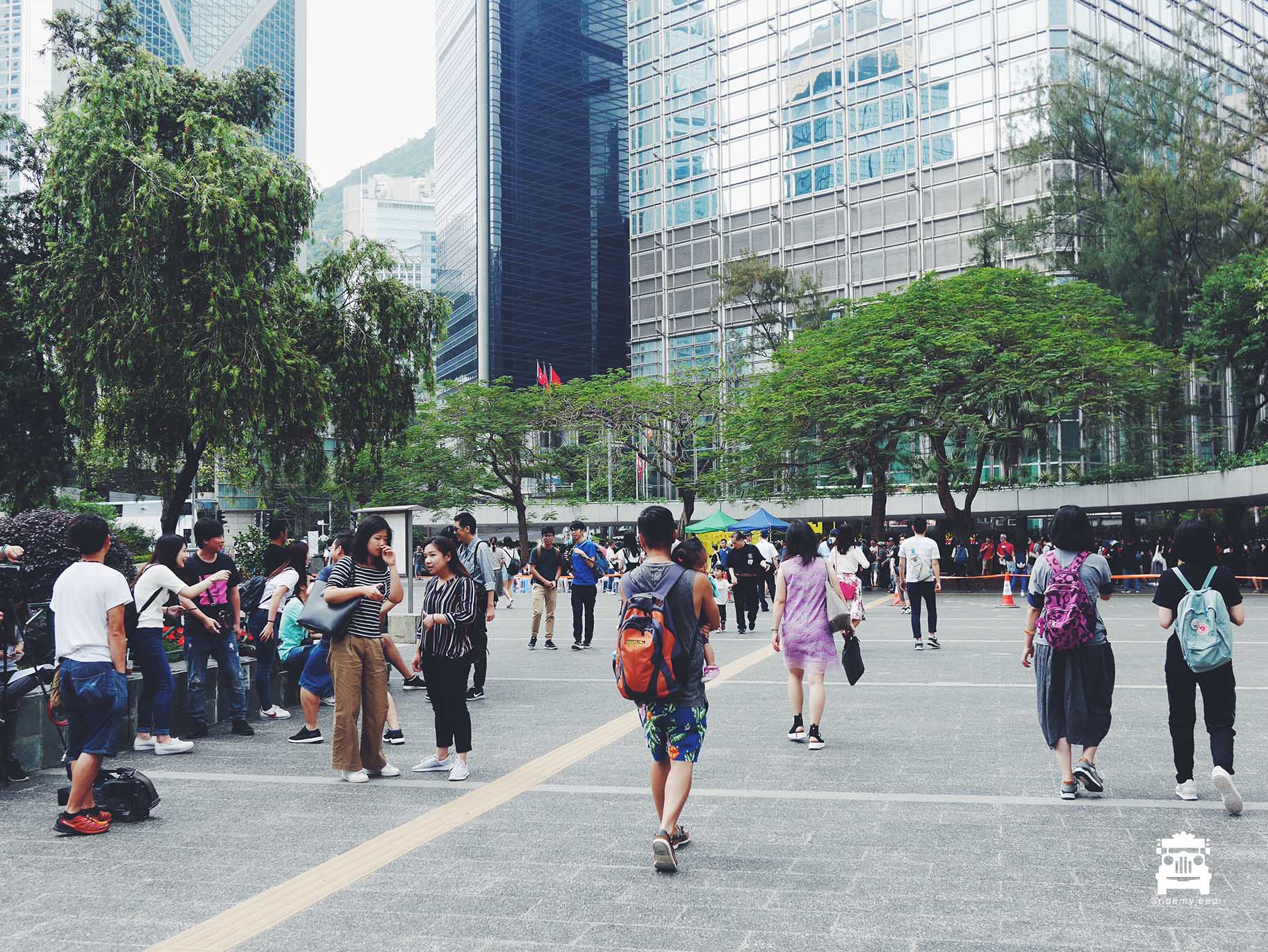 “Wow, the line is long”, I told Wifey as we took our spot behind the snaking line in front of us. Minutes passed and the line grew even longer as more visitors arrived with the same agenda in mind. It took nearly an hour before we reached the ticket booth and we purchased the Peak Tram Sky Pass (HK$99 return per adult) which included the ticket to ride up and enter Sky Terrace 428 for the panoramic views of the city.

It was finally our turn to board the tram and as soon as the doors opened, there was a manic dash to get in first for seats. Wifey and I happened to be at the front of the line and as I was entering, I felt people pushing me from the back. I immediately stopped, turned back and with a very stern voice said “Please stop pushing, I’m holding my daughter!”. We managed to sit beside a window overlooking the city side. Sitting on an angle, it felt more like a carnival ride as the tram shot up toward the top.

Arriving at the Peak Tower, we followed other visitors on their way to the top. It felt like we took ten escalators up just to reach the Sky Terrace 428. As we stepped out in the open we were immediately exposed to the 360-degree view of the city. The towering buildings below were bordered by lush greenery. I could see the other side of the island across the bay. The view was softened by fog/smog that hovered above the city. It was a beautiful sight.

For lunch, Wifey and I settled on eating at Wildfire+, a modern Italian restaurant situated at the Peak Tower. I ordered the wild mushroom risotto and a whole supreme pizza, hoping Bub will like at least one of those dishes. She preferred the pizza over the risotto. The risotto was well cooked, creamy and the earthy mushroom flavour was well pronounced. There was a generous amount of toppings on the pizza. It was a little on the expensive side however, we also had to “pay” for the view. Plus it was a good break from all the Asian dishes we have had from previous days. Three and a half stars for the meal. 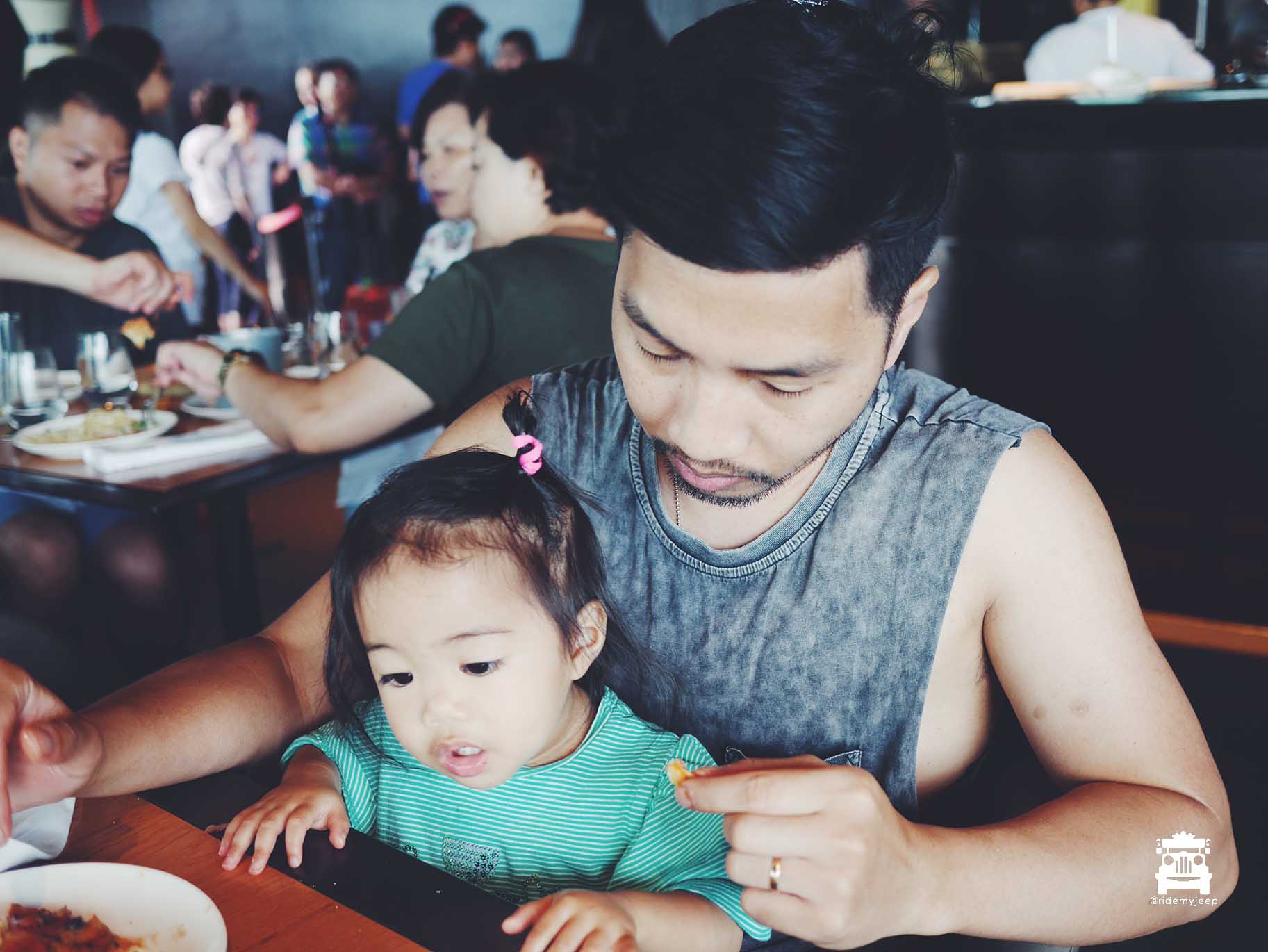 Back to the hotel

The wait for the tram back to Lower Terminus was shorter, and the ride was a lot calmer than going up. As we exited the building, we passed by the huge line waiting for their turn to go up. Some were even braving the intense midday heat from the sun. I felt much relief thinking that we had already done what the visitors in line would still have to endure. We reached our hotel just before 2pm. Another afternoon nap was in order.

Before leaving our hotel, Wifey had googled for congee restaurants around the area as she wanted something different to try for Bub’s dinner. Congee Wonderland came up that was a few blocks away in another district; at Fortress Hill. We opted to walk as the sun was about to set, passing by never-ending apartment buildings that lined the main street.

We entered the restaurant and asked for an English menu. I initially ordered a serving of the chicken congee plus some rice noodles however, we were told in broken English that there was a minimum order of HK$100 and so we added a serving of the vermicelli roll with bbq pork. The hot congee came with minced chicken, recommended to us for Bub instead of sliced. It appeared to be raw and so we made sure to stir it carefully within the soup to cook it thoroughly. The flavour was subtle, bordering on bland which didn’t excite Bub’s palette much. The noodles were a little dry (how it was supposed to be?). The hero dish was the vermicelli roll. The roll itself was silky smooth and the sweet and smoky barbecued pork inside was full of flavour. Three stars for the three dishes.

From Fortress Hill Station, we took the subway train that traveled below Victoria Harbour to reach Tsim Sha Tsui, the main district in Kowloon. Known for its shopping and night life, the streets were buzzing with energy. Crowds swarmed every direction. We stopped by a Sanrio My Melody display and took photos of Bub beside the cartoon character.

It was quite a warm night and walking around Tsim Sha Tsui made us quite thirsty and so we decided to order some drinks at Heeretea. We’d been drinking a lot of boba milk tea in our travels and the caffeine was definitely affecting Bub’s sleep and so this time we opted for some fruit tea drinks instead. For Bub and myself, we shared a large four seasons fruit tea drink and Wifey had the oolong. As soon as Bub had a sip, she smiled and said “Mmmmmm… yummy!”. It was summer in a cup. I could taste oranges, pineapple and passionfruit. Wifey wished she ordered a more exciting beverage.

“The water is this way”, I confidently stated as I looked at the map on the Freedy phone provided by our hotel. A ten-minute walk from the main district, we ended up at Kowloon Public Pier which had a great view of Victoria Harbour and the island on the other side. The Avenue of the stars was closed due to some sort of renovations but we were happy to just be there and enjoy the view. Wifey had mentioned about the Symphony of Lights show that happened every night across the harbour and so we had to make sure we had a prime spot to watch it. It was another thirty minutes of waiting until the show began. The pier was packed with people all vying for space to view the show properly. We were right at the front and we managed to see it without any obstructions. Bub was not interested at all and sat in her stroller playing with my phone while Wifey and I watched the multimedia show happening in front of us. It started with different coloured flashing lights on windows of buildings across the island, pulsing and flickering to the beat of the music. Laser lights then shot up from tops of buildings, some reaching to our side. The water reflected the colour of the lights which made the harbour look more vibrant, a feast of the eyes! 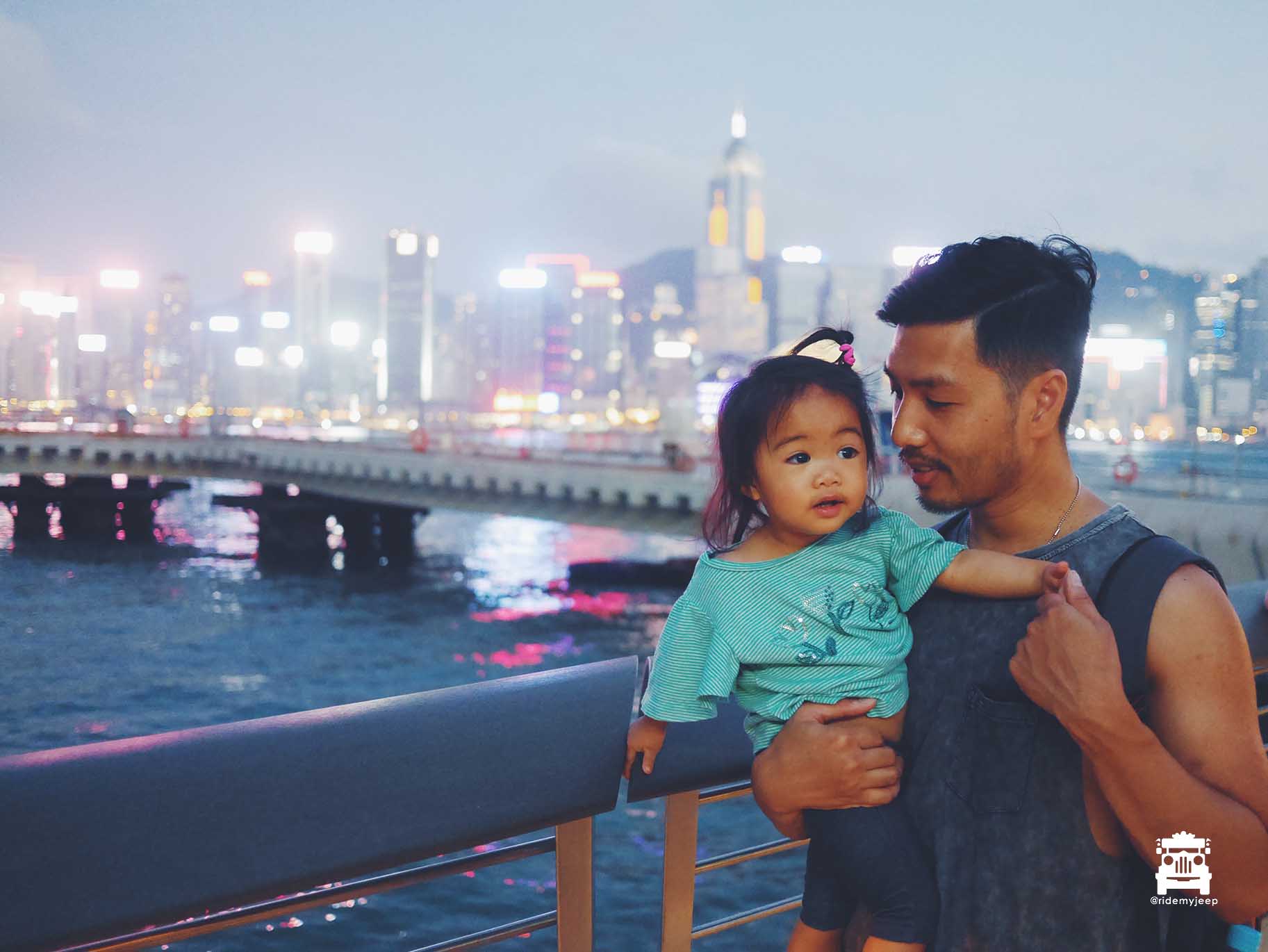 Across the road from Heeretea, I had spotted a very familiar restaurant logo, of Filipino background which got me way too excited. They had Jollibee in Hong Kong! I wasn’t aware that this very famous fast food restaurant from the Philippines had opened in Hong Kong (there are numerous, after doing some googling). There was no chance we were going to go home without eating there. Bub didn’t have enough to eat at Congee Wonderland and so we thought she might eat something here instead. It would be her first time to taste the food here. The first 11 years of my life, (my childhood years) we lived in the Philippines. I remember vaguely my excitement as a 7-year-old kid finding out that they had opened a Jollibee store in the city we lived in. My parents would take my siblings there for special occasions. Even as an adult, whenever I visited the Philippines, I had to make sure I ate Jollibee at least once during the trip. This was no exception.

The store was (of course) filled with mostly Filipinos. I found a table for us and went straight to the counter to order. “One Chickenjoy with rice, one Jolly Spaghetti and a Jolly Hotdog please”, I excitedly said. As soon as I brought the food back to our table and opened the meal boxes, I couldn’t take the grin off my face. I took a bite of the crispy chicken drumstick I had dipped in the gravy and the familiar taste brought me back to my previous life in the Philippines. It tasted like home. Bub was also enjoying the Filipino style spaghetti, drowned in sweet meat sauce with hotdog pieces. Jolly Hotdog was a favourite of mine, hotdog in a bun with tomato ketchup, mustard and relish topped with melted cheese. I was in heaven. Heavily-biased review; I gave it 5 stars.