Nibbles at the Night Market

After our quick lunch and dessert at Shin Kong Mitsokoshi Food Court, we started making our way to Chiang Kai-shek Memorial Hall. We were there the day before as part of our city tour however, it was such a quick stop that we didn’t get to see the square in its entirety. On the way to our destination, we passed by the Presidential Office Building. Designed by a Japanese architect, Uheji Nagano back in 1910 and inspired by European architecture it currently houses the office of the President of the Republic of China. We didn’t have time to take a tour inside but instead found a grassy car park (Yes! A carpark) across the road where we could take a decent photo of it behind us.

“Wow!”, I said as my jaw dropped while I looked up to see the magnificent structure standing before me. The Arch of the Liberty Square towered above us around 10 storeys up, painted in white with blue-tiled roofs. I had to step back quite a bit to get the whole thing within the frame of my photograph. I followed Wifey in as she entered the middle arch entrance, leading us in full view of the massive square inside. To our left was the National Concert Hall and on the right stood the National Theatre, both equal in grandeur. Right in front of us in the distance, the Chiang Kai-shek Memorial Hall completed the view. Hundreds of people scattered around the square, each to their own agenda. Some out for a casual stroll, while others had their dogs with them. One man had a “Free Hugs” sign he was waving around, a few happily taking his offer and embracing him with smiles on their faces. Plenty of tourists including us were busy taking photos of the surrounding. We headed closer toward Chiang Kai-shek Memorial to get a better look. It was definitely more grand seeing it from the front rather than our back view from the day before. Behind the building, dark clouds gathered and appeared to have been moving our direction which prompted us to call it a day and head back to our hotel. 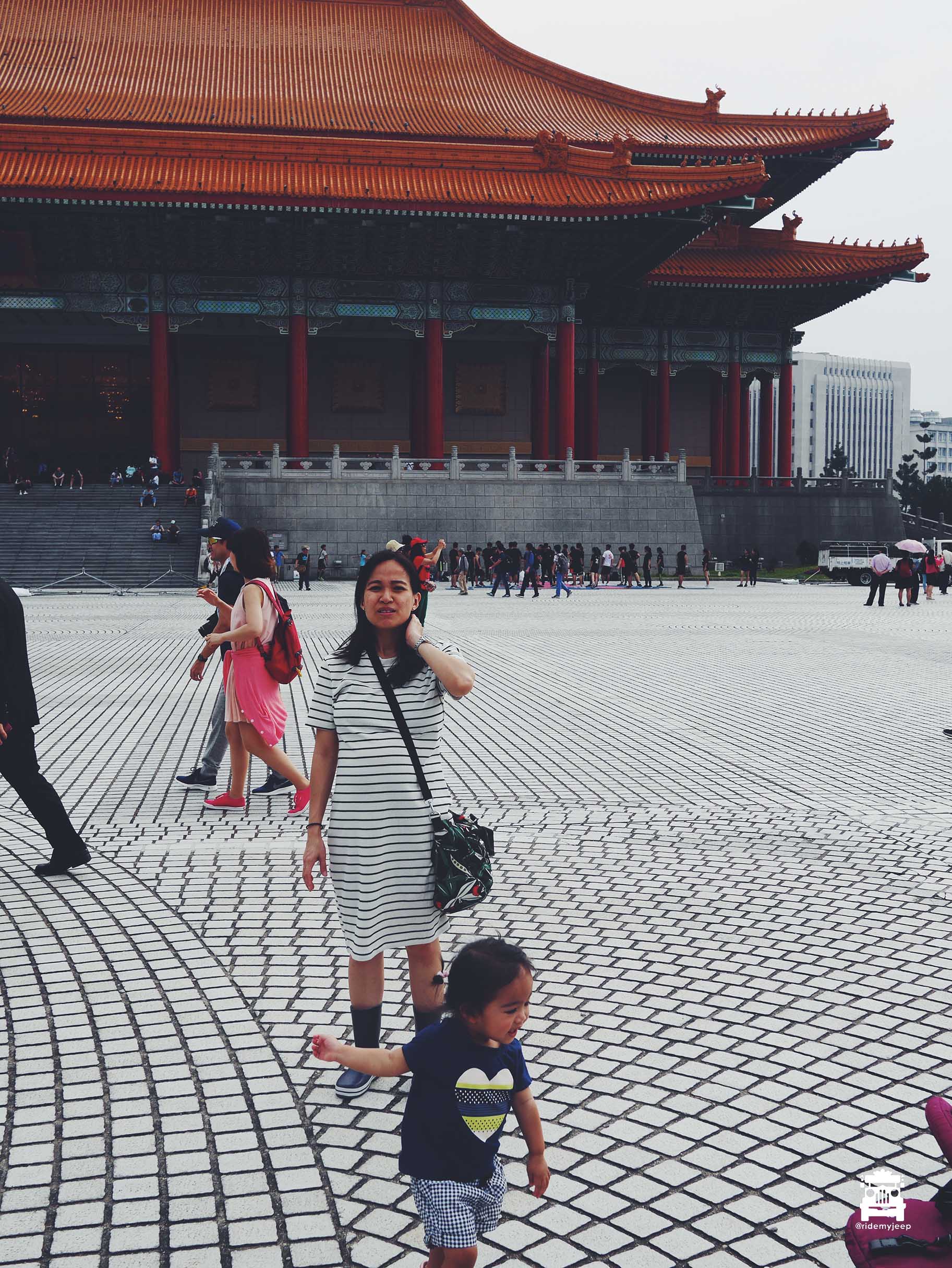 Just before reaching our hotel, I decided it was time for me to finally try the pepper cakes that I had curiously seen the day before. Its corner shop constantly had a line of customers waiting to purchase and today, I was one of them. While I waited in line, I eagerly observed how they made the “cakes”. The stretchy round dough which looked similar to dumplings was precisely stuffed with minced pork and chopped chives. It was then rolled back into a bun and stuck around the wall of a cylindrical oven. It didn’t take long until the next batch of cakes were ready and I managed to score two cakes to take out. As we reached our hotel room, Bub was already asleep and so Wifey and I had time to eat it in peace (not even kidding). The cakes were overwhelmingly peppery (as you would expect for a PEPPER cake). I had to be careful not to burn my tongue with the hot juice that oozed out as I bit into it. The heat of the pepper was more favoured by Wifey than myself however, it’s a must try street food for first timers in Taipei.

It was our final night in Taiwan and we didn’t want to leave without visiting a night market. Ningxia Night Market was the closest to our hotel; only two stops via subway. The rain had cleared and the night was warm which made our walk from Shunglian Station quite comfortable. Within ten minutes, we had reached the market. Food stalls lined both sides of the street. The road in the middle was teeming with people, some had food in their hands while others waited to be served. “Not sure if we can push the stroller in there…”, I looked at Wifey. “Let’s find a resto to feed Bub”. Unwilling to push through the crowd, we manoeuvred through the sidewalk where there were plenty of restaurants to choose from. “This place looks clean”, Wifey declared, stopping at Minji Cuisine. I quickly glanced through the menu and there were dishes that I thought Bub would like and so we grabbed a table and ordered in an instant, barbecued chicken with rice and bamboo shoots, pork and prawn dumplings and egg noodle soup to cover all bases. Bub thoroughly enjoyed the chicken and noodles. The chicken was tender, sweet and salty balanced perfectly and tasted better with the rice. Wifey added some soy sauce and vinegar over the pork and prawn dumplings to cut through its fattiness. It was a delicious meal which made us very full before exploring the stalls at the night market.

“I’ll go in first to take some pics and footage”, I said to Wifey who decided they would stay in one spot and wait for me as it was too crowded for the three of us plus the stroller to venture in the market area. I had to be quick, I told myself as I knew Bub would only sit still for a little while before boredom got the best of her. As soon as I entered the sea of people, I was swept in different directions. There were so many types of street food to choose from. Seafood was abundant, from grilled squid to deep fried fish balls. Any meat you could skewer and barbecued, it was there. “If only I wasn’t so full…”, I thought to myself. I bought a chicken skewer that looked quite promising and waited for it to be cooked over coals. I came back with my skewer in hand and shared it with Wifey who was happy to see me as Bub was getting quite unsettled by being forced to stay in one spot. She mellowed out when she heard a busker playing song and joined me in some impromptu “hand dancing”. It was hilarious to watch. I gave Wifey some time to explore the market on her own while I took care of Bub. 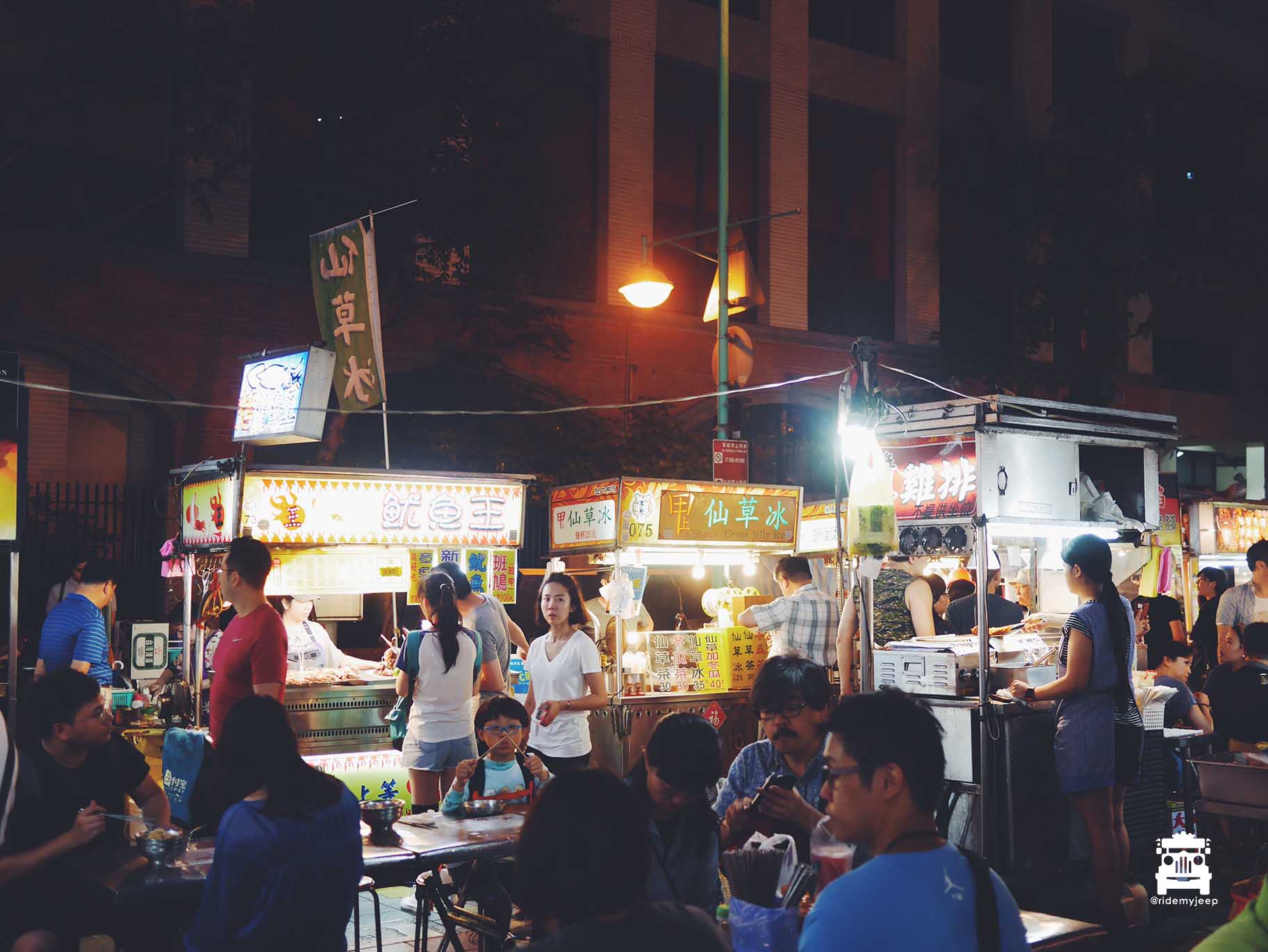 Before going back to our hotel, we stopped at a local CoCo tea shop and ordered and apple and passionfruit tea drink to quench our thirst. It was a sweet ending to our jam-packed two day trip in Taiwan, next stop Hong Kong!