The night began upon reaching the venue Seaside Dampa. Wifey’s uncle promised a seafood feast tonight and we were in for a treat. Located on the shores of Manila Bay, the compound had a wet market surrounded by small to big sized restaurants. The concept of the dampa experience was for diners to purchase seafood at the market and then bring it to your preferred restaurant where they will cook it in any way you want. Since the market would be too chaotic for bub, Wifey and the rest of her relatives headed straight to the restaurant while I went with my Uncle Orly and Uncle Rich and made our way to the market. 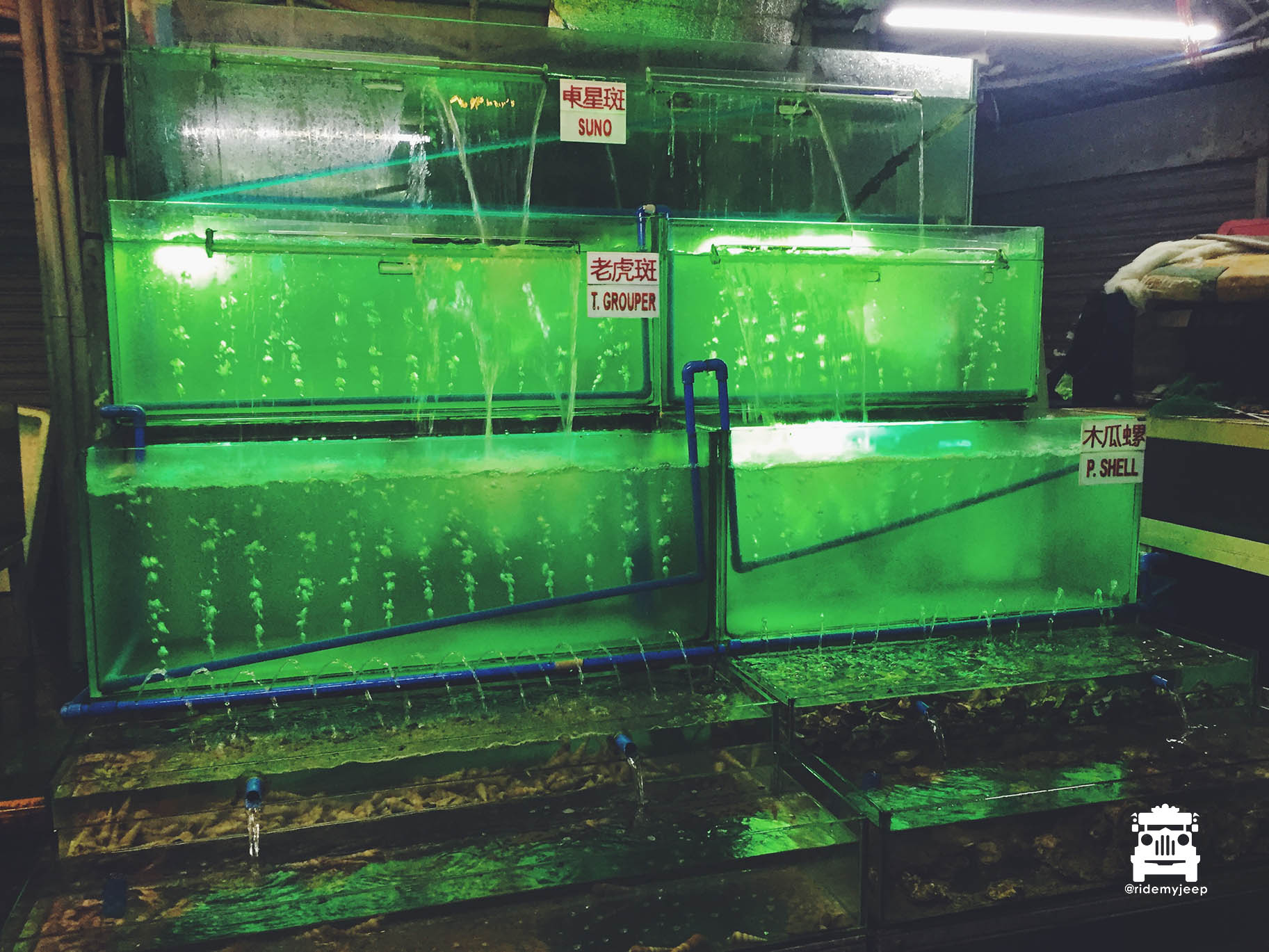 Travel tip: Wear closed shoes in a wet market. The path to the market was already quite muddy due to rain that morning. Inside the market, the floors were quite wet too due to melting ice and water that came from the stalls that proudly displayed their fresh seafood produce. As soon as we entered we were greeted by spruikers, a typical Filipino market scene, enticing you to buy the freshest seafood that only THEIR stall sold. Dried crab shells hung on nets on the ceiling. There were stalls as far as the eye could see. I was just so happy to be in amongst it all, a quiet but excited spectator, who took photos of everything. We stopped at the first station – mud crabs. Uncle Orly was the expert at choosing the best crabs. One cage was filled with dark shelled crabs. Their shells iridescent of green and purple under the lights. Claws and pincers where safely tied together. He purchased a few kilos. 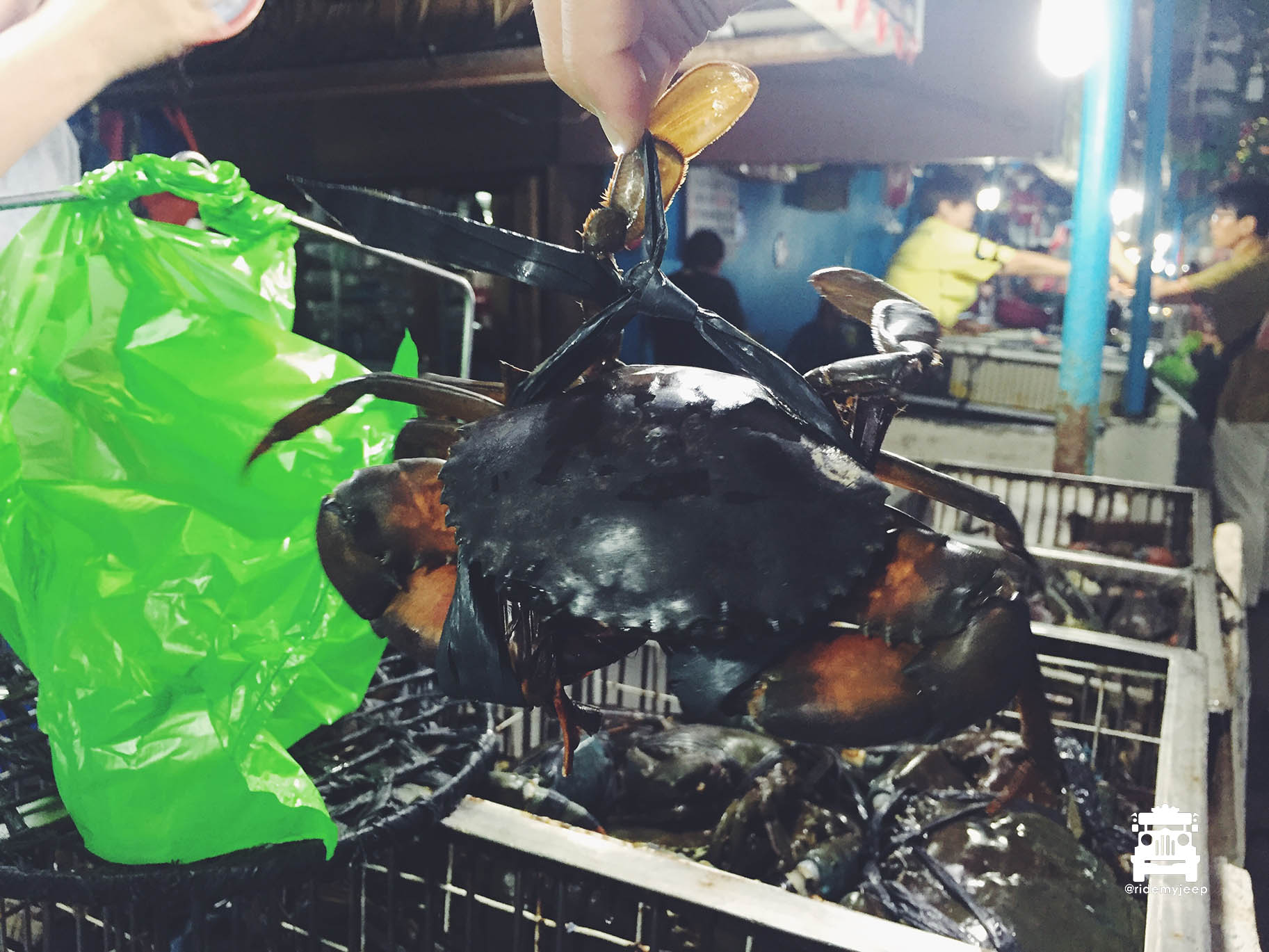 As we passed by the clam station, an amusing sight caught my attention. The live pippies in the trays were shooting streams of water, arching above the surface from one corner to the other. For a second it seemed like I was in a middle of a mini water symphony. A few steps more and we were in the middle of the fish station. Walls and walls of brightly coloured fish and squid were on display. There were coral fish, bream, red snapper, we were in seafood heaven. Salmon heads were purchased for sinigang, a Filipino sour soup based dish, one of Wifey’s favourites. 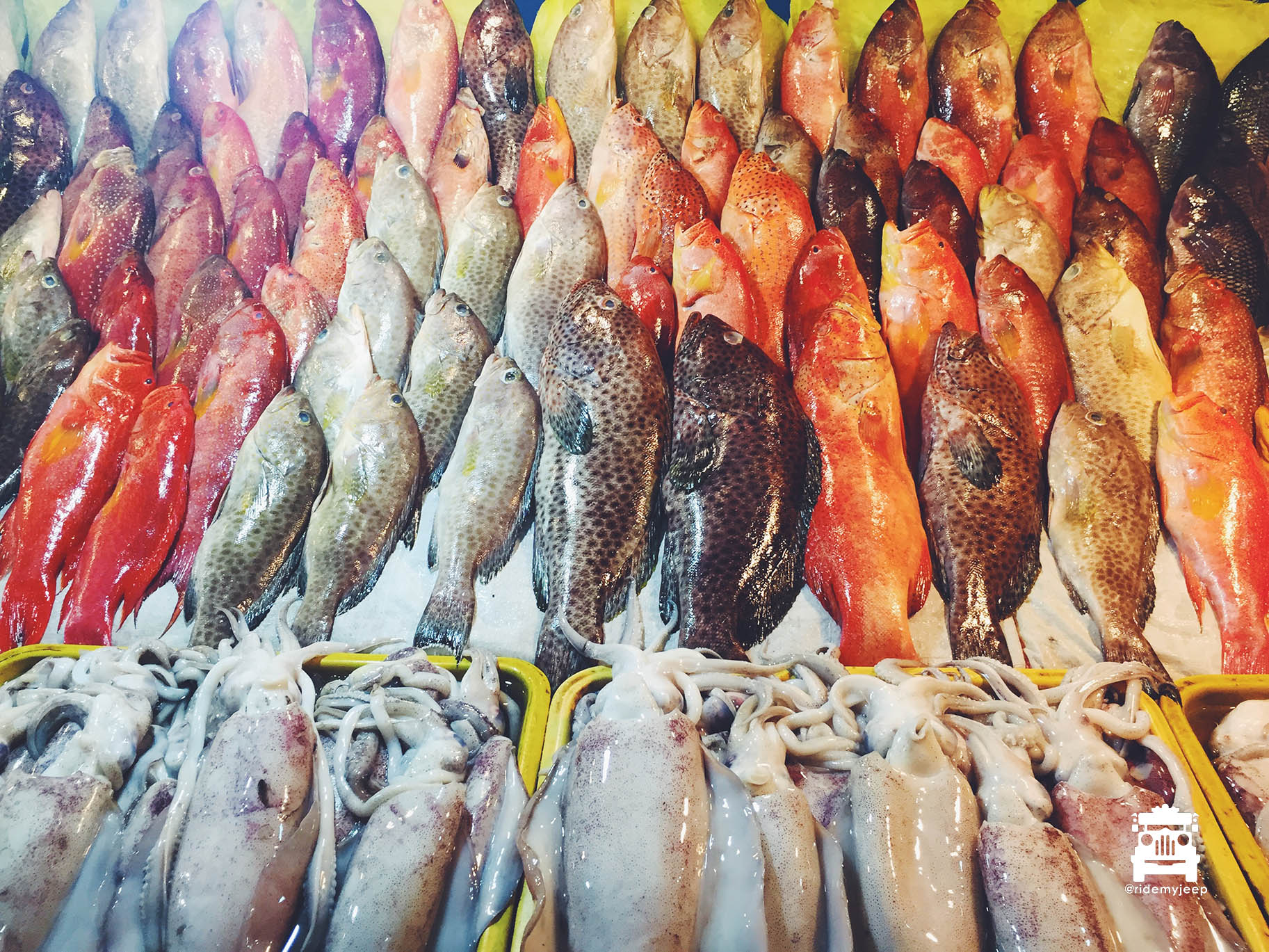 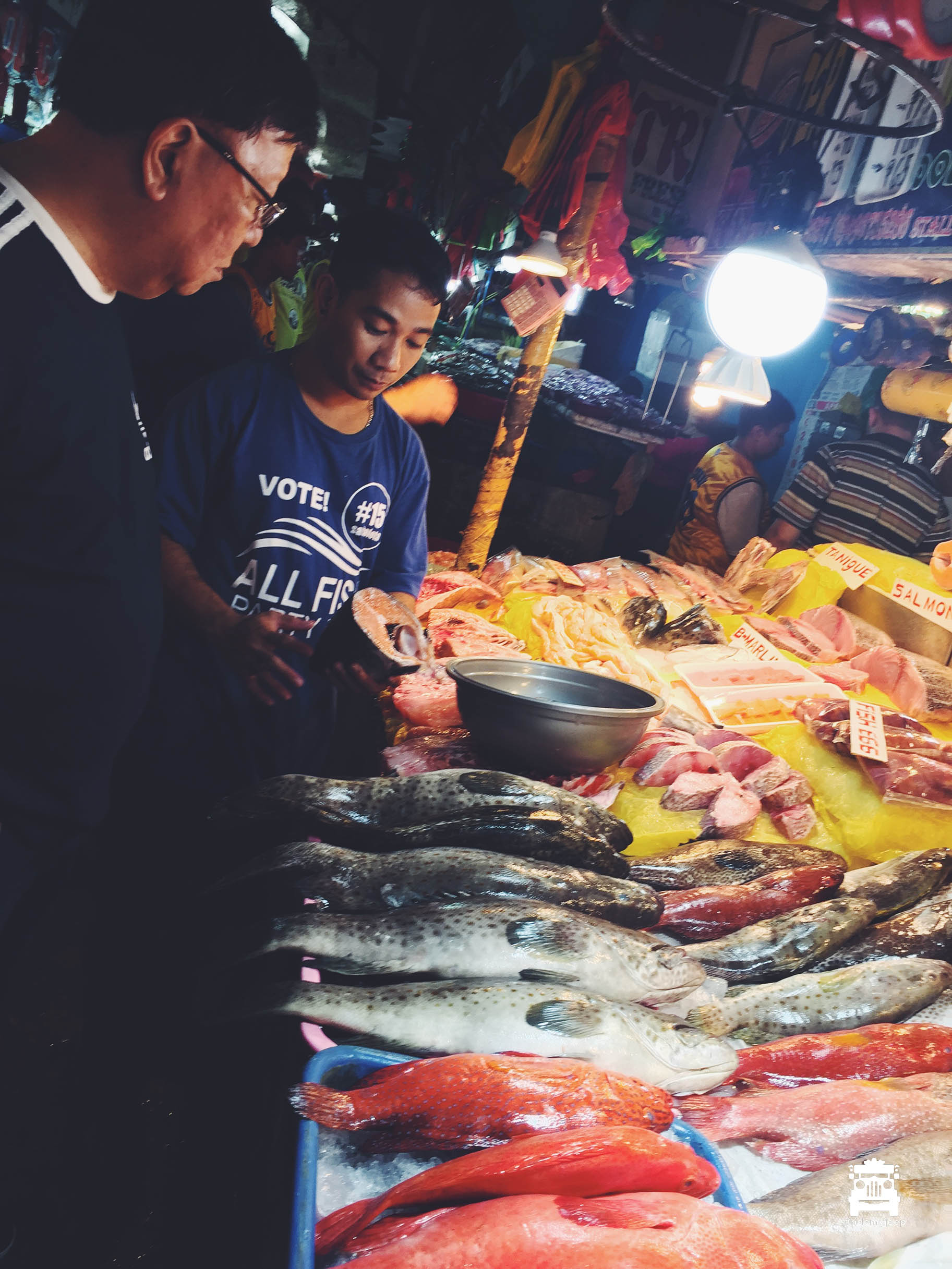 Bucketfuls of prawns all lined up on stalls stopped us dead in our tracks. The tiger prawns were huge! A seafood feast would not be the same without it. I was already salivating at the thought of the meal to come. We picked up some pork belly too and a few green mangoes to go with the bagoong (shrimp paste). At last, our ingredients were complete. 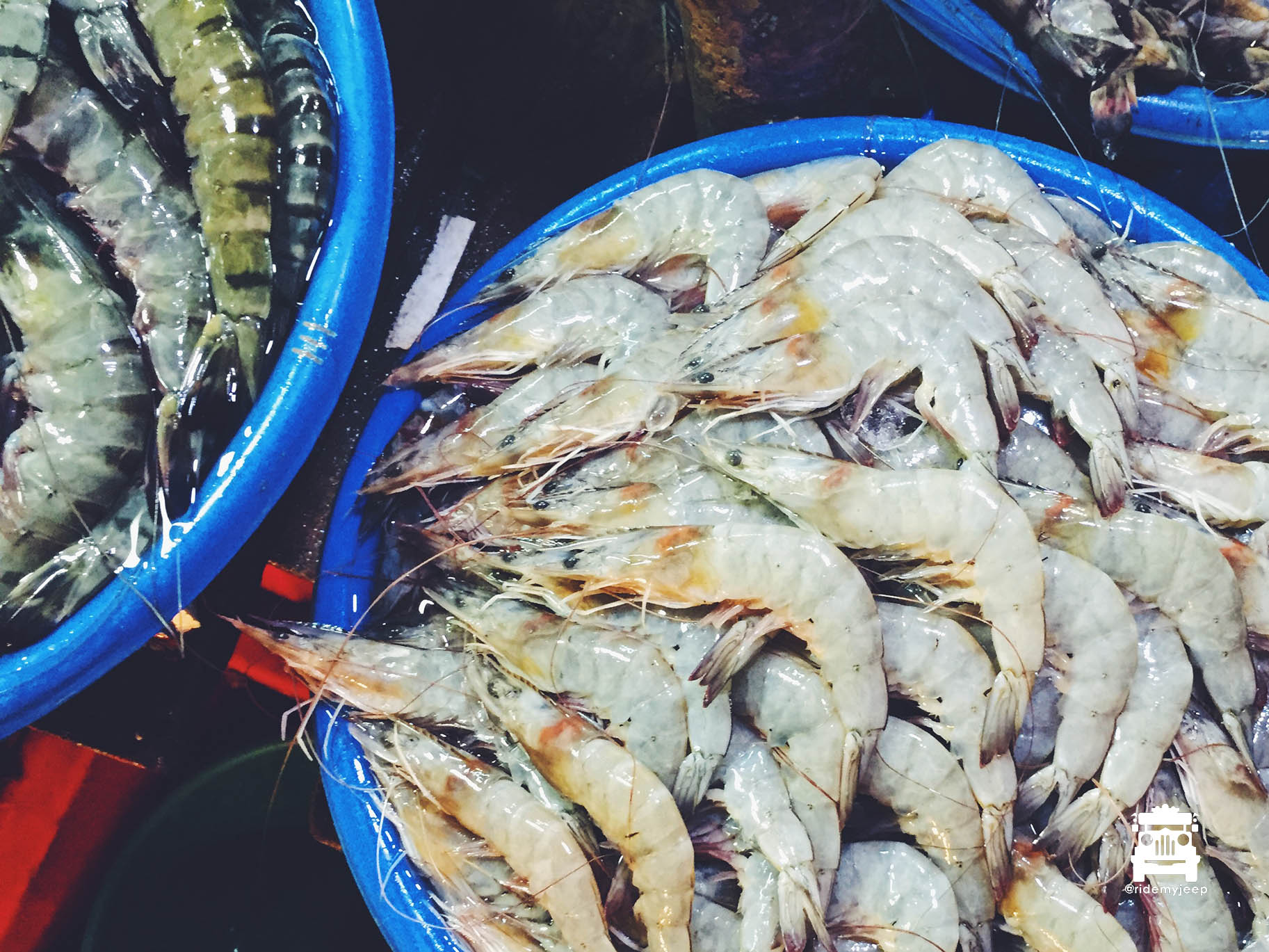 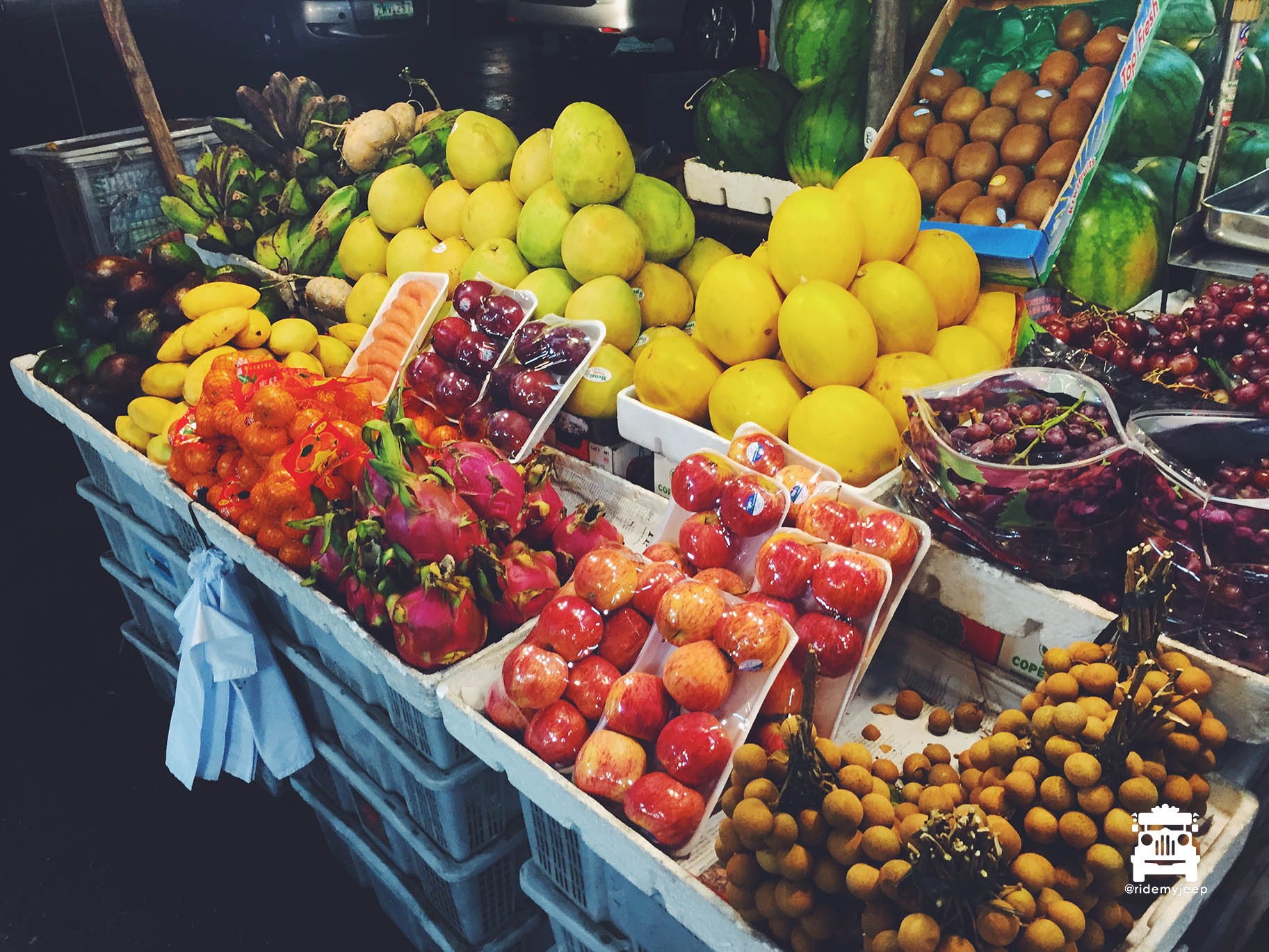 Before entering Sharmila Seafood Restaurant, our seafood were surrendered at the front, weighed then sent back to the kitchen already with cooking instructions. At the table Wifey, bub and her relatives were all seated full of anticipation. As I looked around there were plenty of customers in the middle of their own seafood feasts. Soon enough it would be our turn. 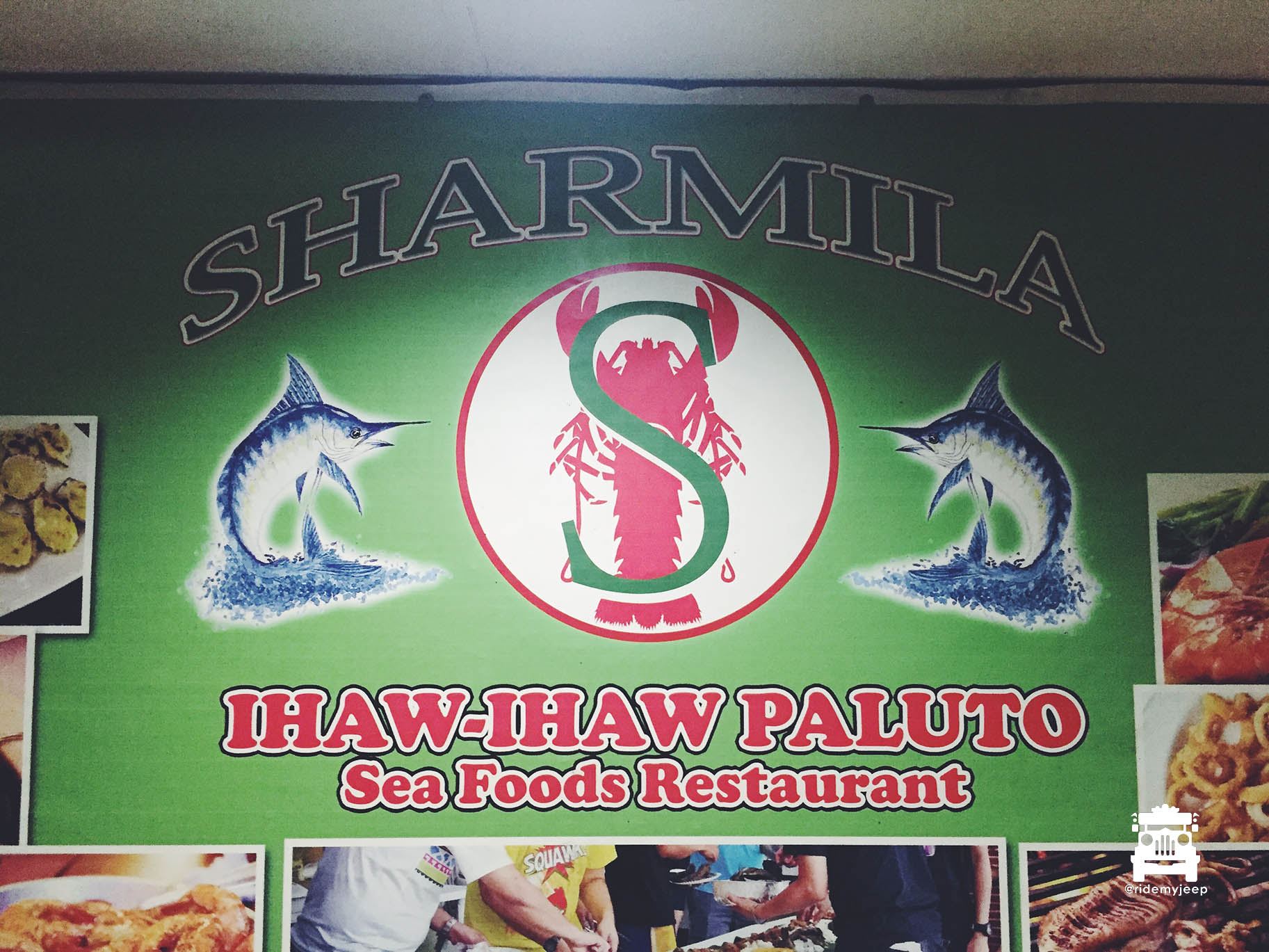 After a short wait, the first of many dishes was put before us. The mangoes were prepared and cut into small pieces with bagoong on the side. It was too sour for my liking. The barbequed pork belly came together with the juicy prawns smothered in a sweet chilli sauce. Next was the steaming hot salmon head sinigang.

The waiter placed not one but two massive plates of crabs on the table. Steam wafted from the bright red crab shells sitting on top of cooked crab pieces that were swimming in a pool of sauce. As appetising as it looked, it was an untouchable dish for I had a shellfish allergy. It didn’t stopped me from devouring the prawns though. I was also allergic to prawns but I only had a mild reaction to it, which was dependent on freshness. These prawns were definitely fresh, plump and moorish. The sinigang hit the right sour note, a perfect palette cleanser after tasting the rich flavoured shellfish on the menu. Bub had to settle for some bland steamed rice.

I would definitely recommend anyone travelling to Manila to visit Seaside Dampa and experience a seafood feast that you won’t be able to forget. Be prepared to spend some decent cash as seafood, especially shellfish tend to be quite pricey (thank you Uncle Orly for the dinner!). It was truly a memorable night.