The announcement over the speaker could be heard throughout the whole waiting gate. Our flight to Cebu was going to be delayed for two hours. A standard flight from Manila to Cebu was only an hour. Wifey’s great aunt was already on her way to meet us at the airport when we told her about the delay and so she had to wait a little longer. As frustrated as I was about the setback there was also excitement as it would be my first time in Cebu. Wifey and her mum had been there a few times before since they had family there. Bub was in her cheerful mood, too stimulated by her surroundings.

A couple of hours of waiting seemed like eternity. Unhappy passengers scrambled to line up as soon as the gate was opened. Lucky for us, we had bub which gave us the first preference to board.

The flight was short and before we knew it we had landed at Mactan International Airport. It was 9:30pm, bub was already sound asleep when our pick up arrived. Wifey’s great Aunt Minda was very happy to see us. We drove straight to Cebu City which was another 40 minutes away.

Wow, I thought to myself. The house was huge! I didn’t see the entire floor space when we arrived the night before but the morning after, my mother-in-law toured us around Uncle Al and Aunt Grace’s awesome dwelling. A grand wrought iron chandelier hung over the spacious lounge room. The kitchen was all white with a massive island in the middle. There was a meeting/dining room that could fit 10 which opened up to a family room that contained a huge TV and a sectional sofa that bordered one side it. It overlooked the great pool next to an entertainment patio. It truly felt more like a resort than a home. 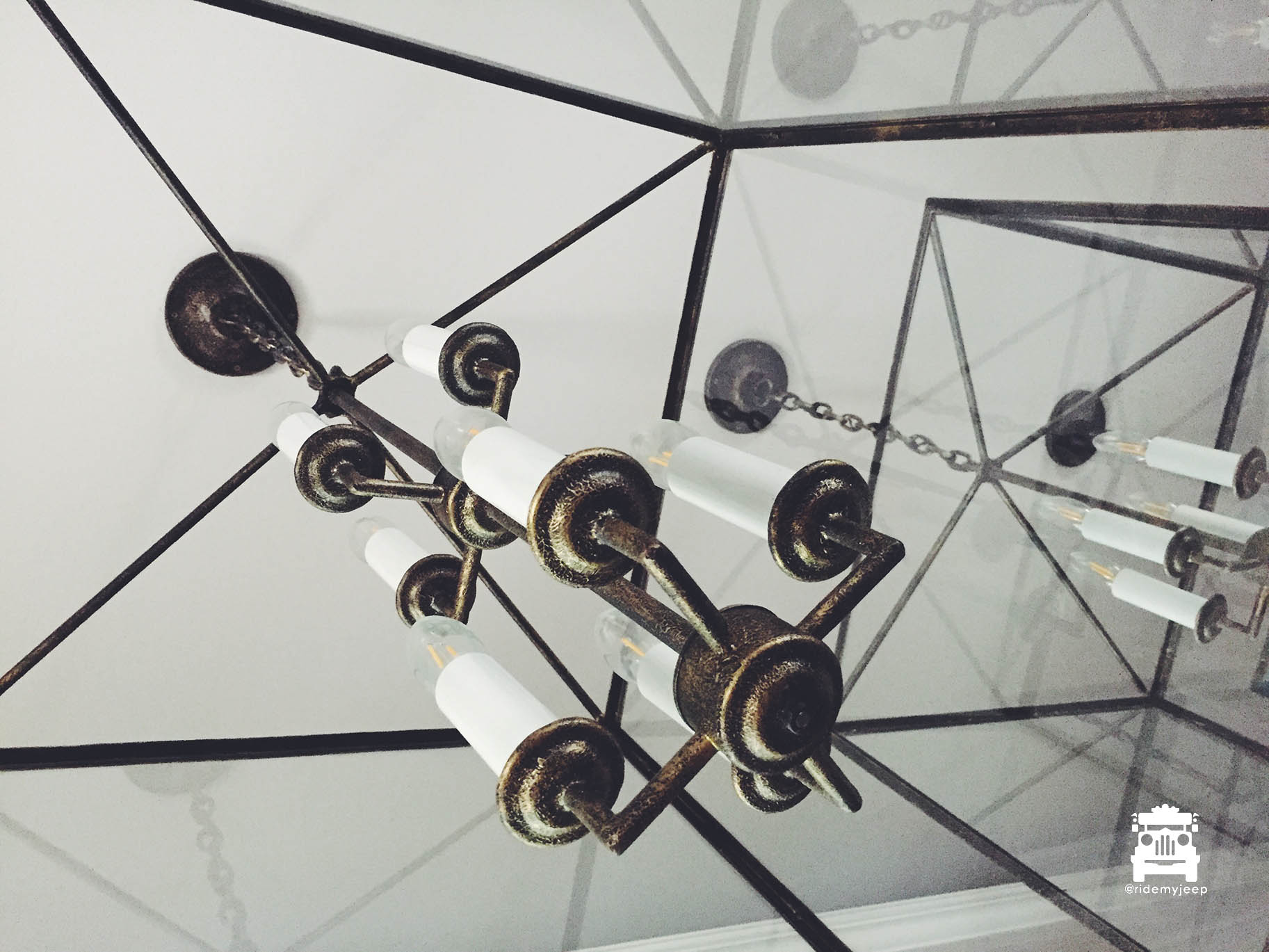 We would have been happy to have just stayed at their place the whole time we were there but we had to see what Cebu City had to offer. Uncle Al was kind enough to lend us one of his employees as our driver/tour guide and so after breakfast, we set forth to our first destination.

Disclaimer / travel tip: If you decide to see Sirao Garden, do not get it confused with Sirao Pictorial Garden and Mini Camping Site. The entrance to Sirao Garden is AFTER the other one. I assumed we visited Sirao Garden but while doing a bit of research for this blog post, I found out that it was the latter.

The way to Sirao PGCS consisted of winding and uphill roads. It was quite narrow at times but we had Abner, our driver who has had plenty of experience and had been around the whole of Cebu island and so he knew the routes like the back of his hand. I had not heard or read about Sirao before but we were told it was called the mini Amsterdam of Cebu due to its flower garden. With little knowledge I assumed I was going to see some tulips. Arriving at the flower garden, the first thing I noticed were the mini colourful umbrellas that hung over the entrance. The whole area was quite lush with vegetation. It was P25 (80 cents AUD) per person to enter, bub was free. 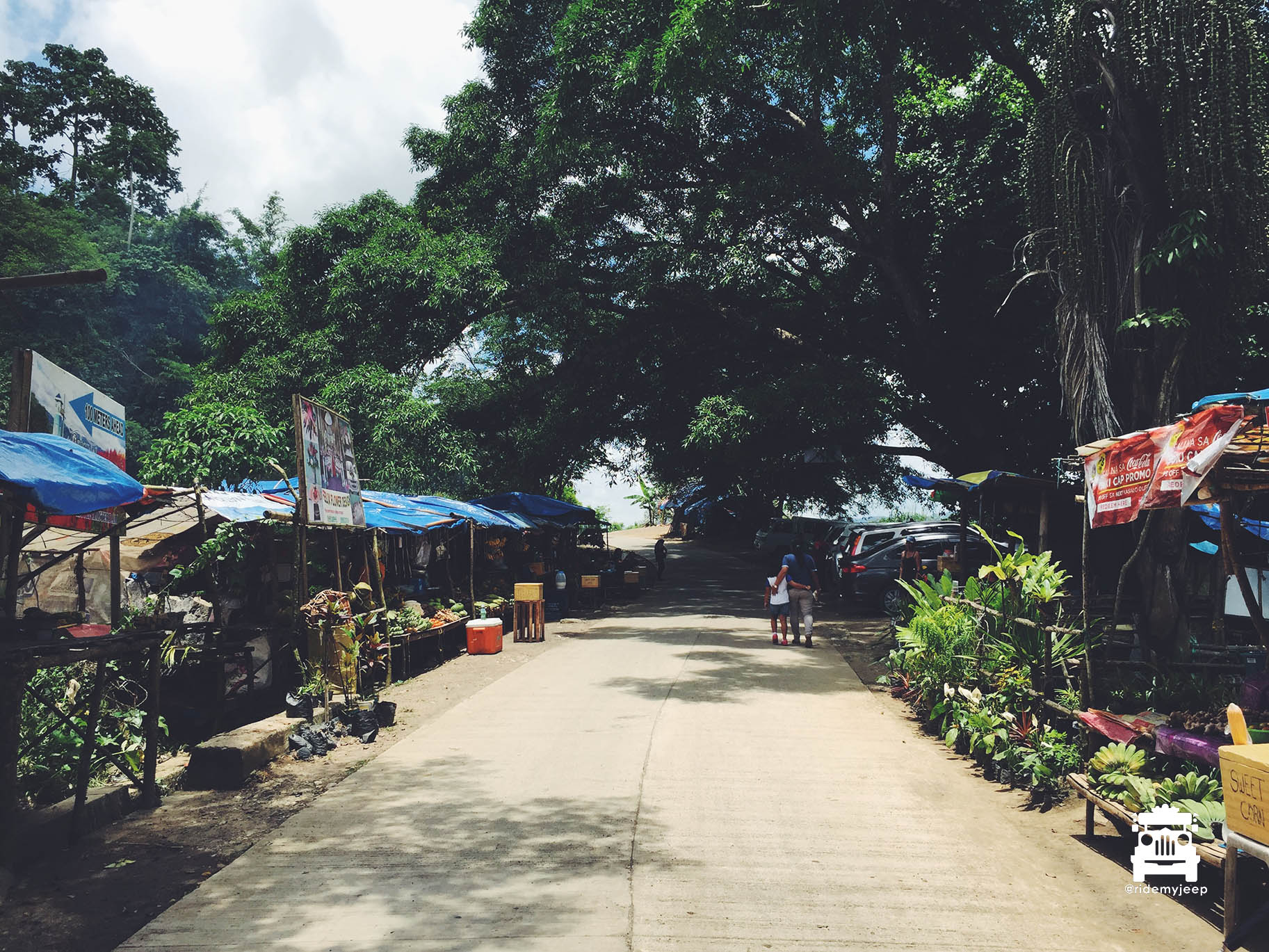 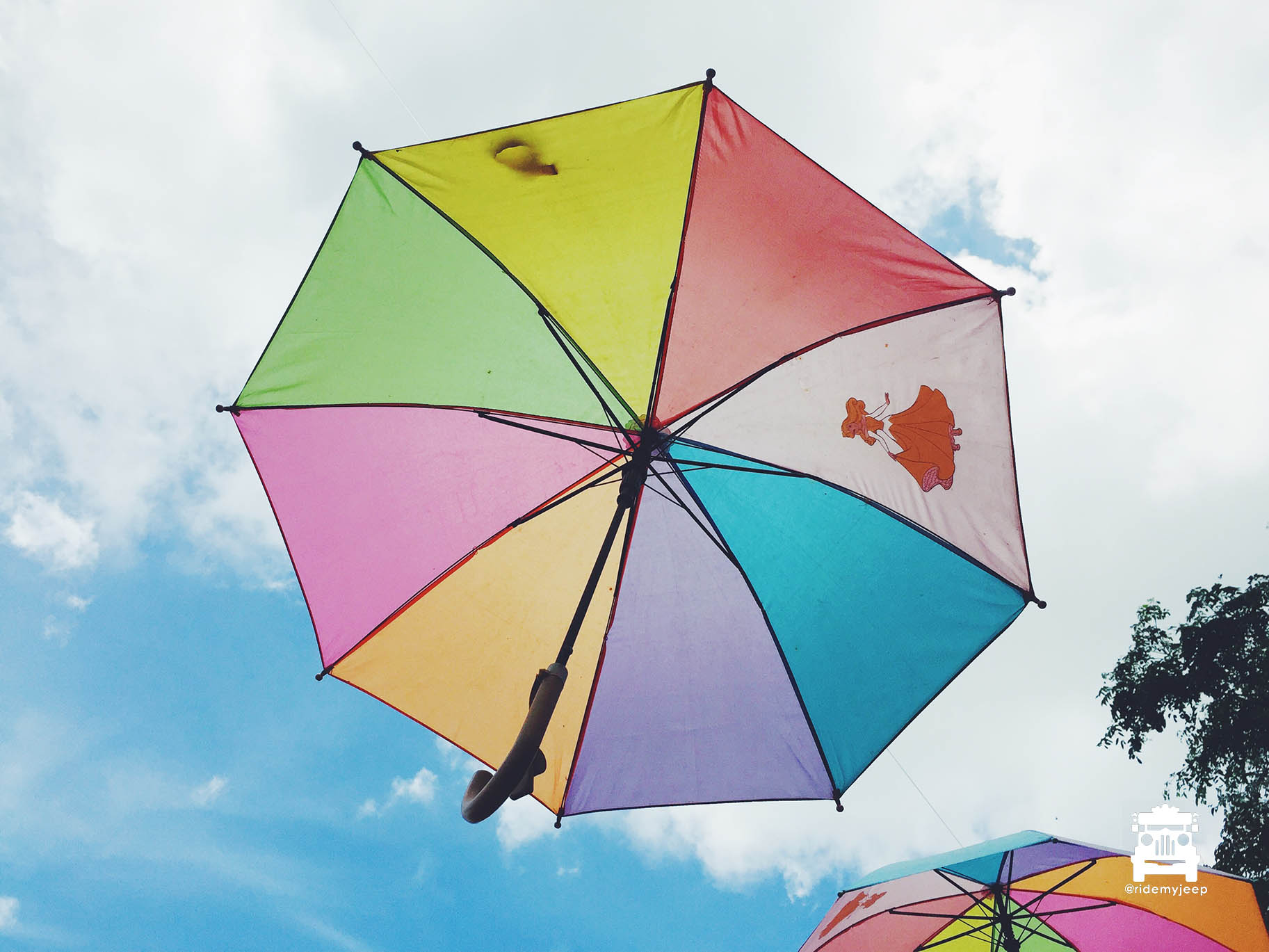 Upon entering the garden, we had to carefully maneuvered our way around various obstacles like wood planks and other building materials as it seemed like the place was still under construction. There were some empty garden beds in between ones there were full of flowers, enough flowers for Instagram worthy pictures :). The stand out flower beds were the celosia or cockscomb. It had a fur-like texture, in hues of red, orange and yellow. It looked like the plants were on fire. 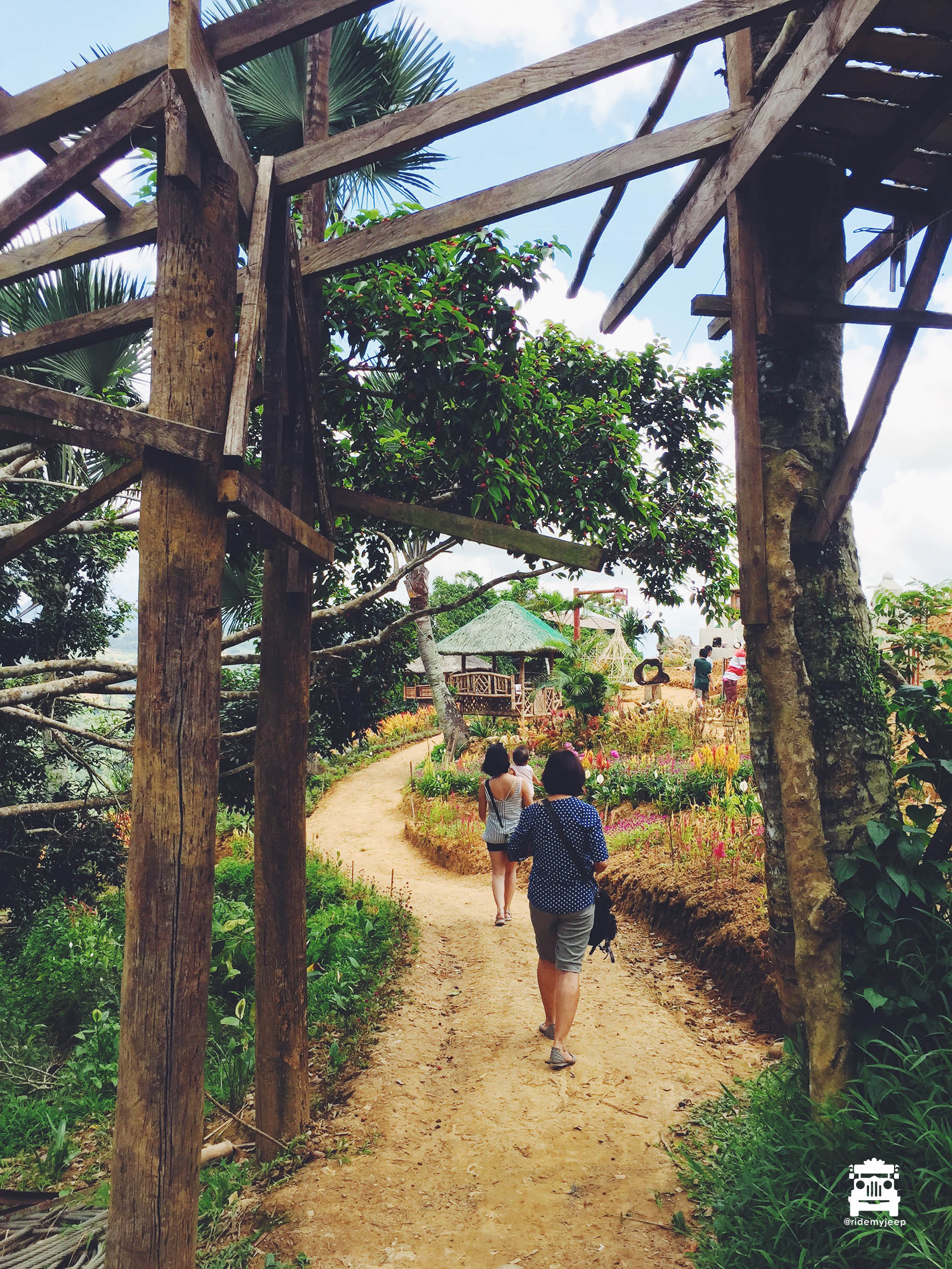 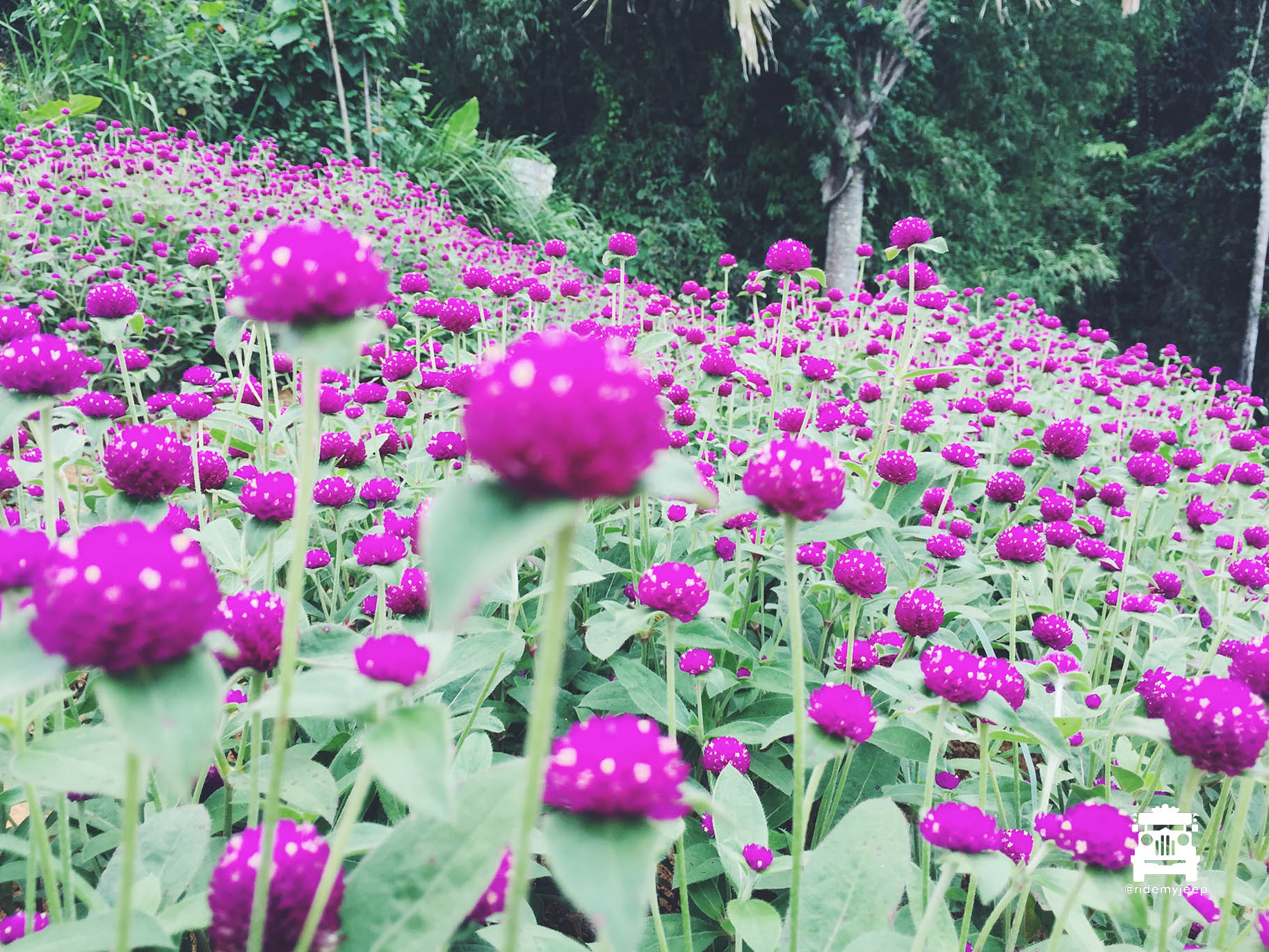 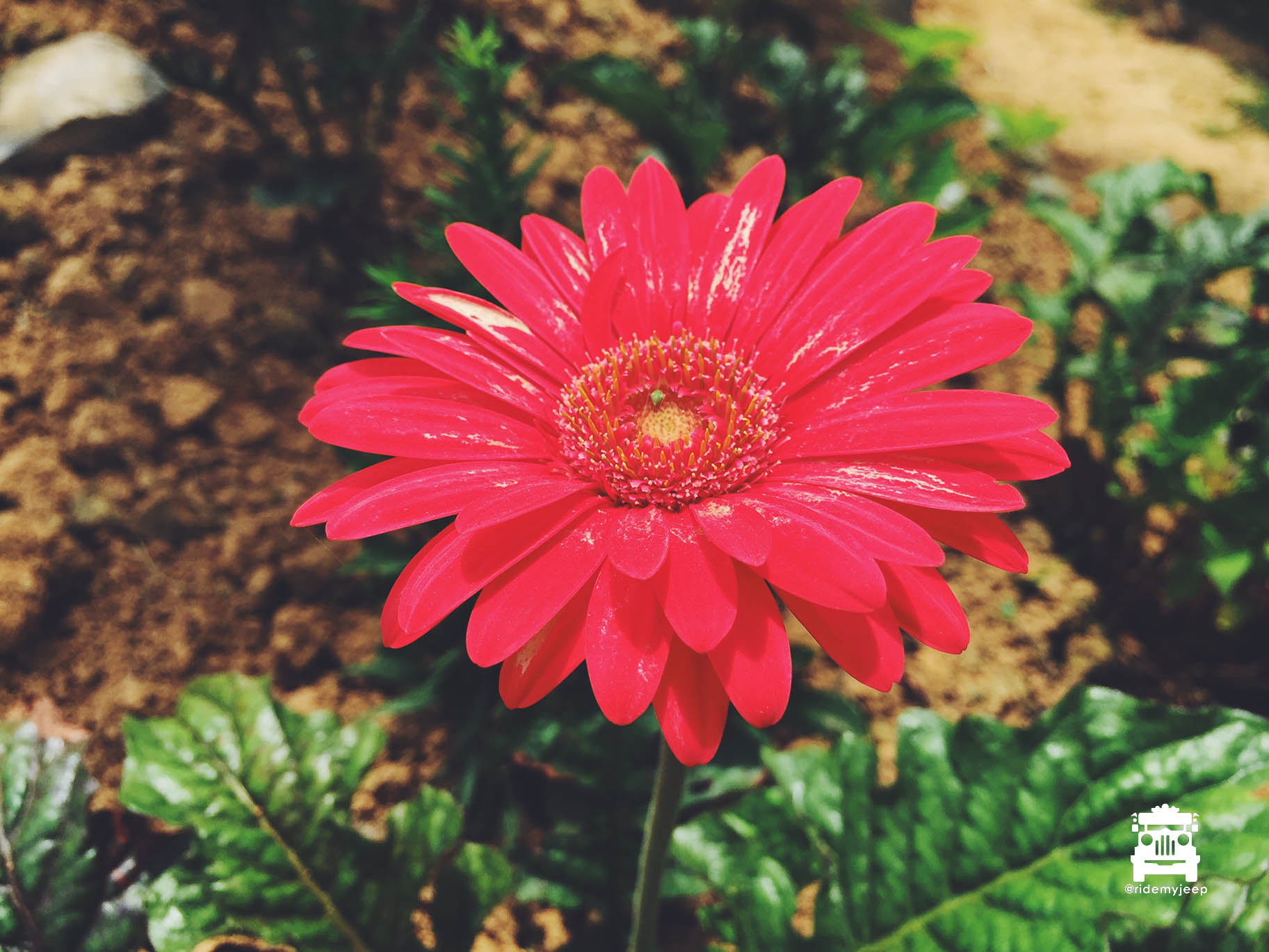 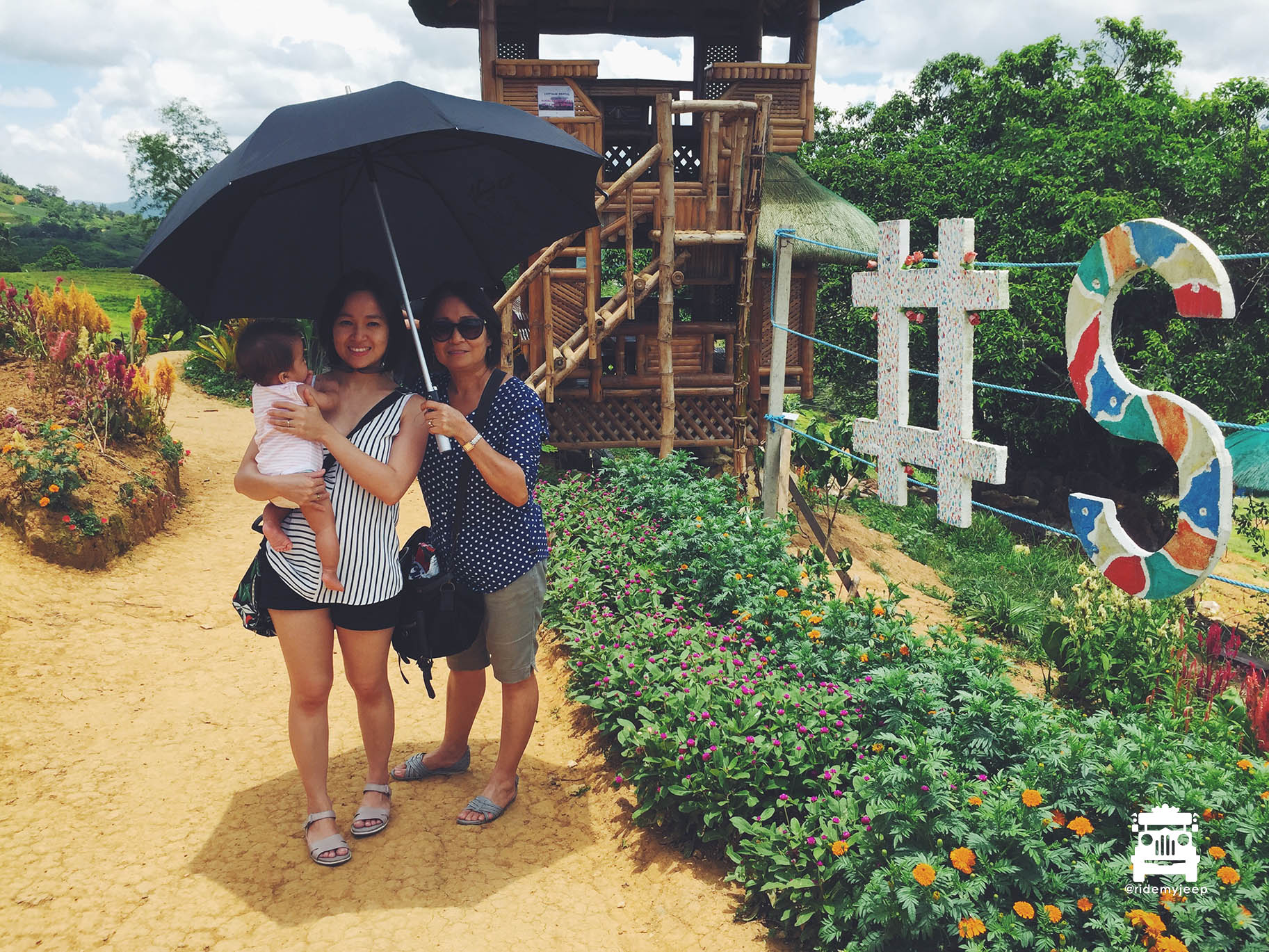 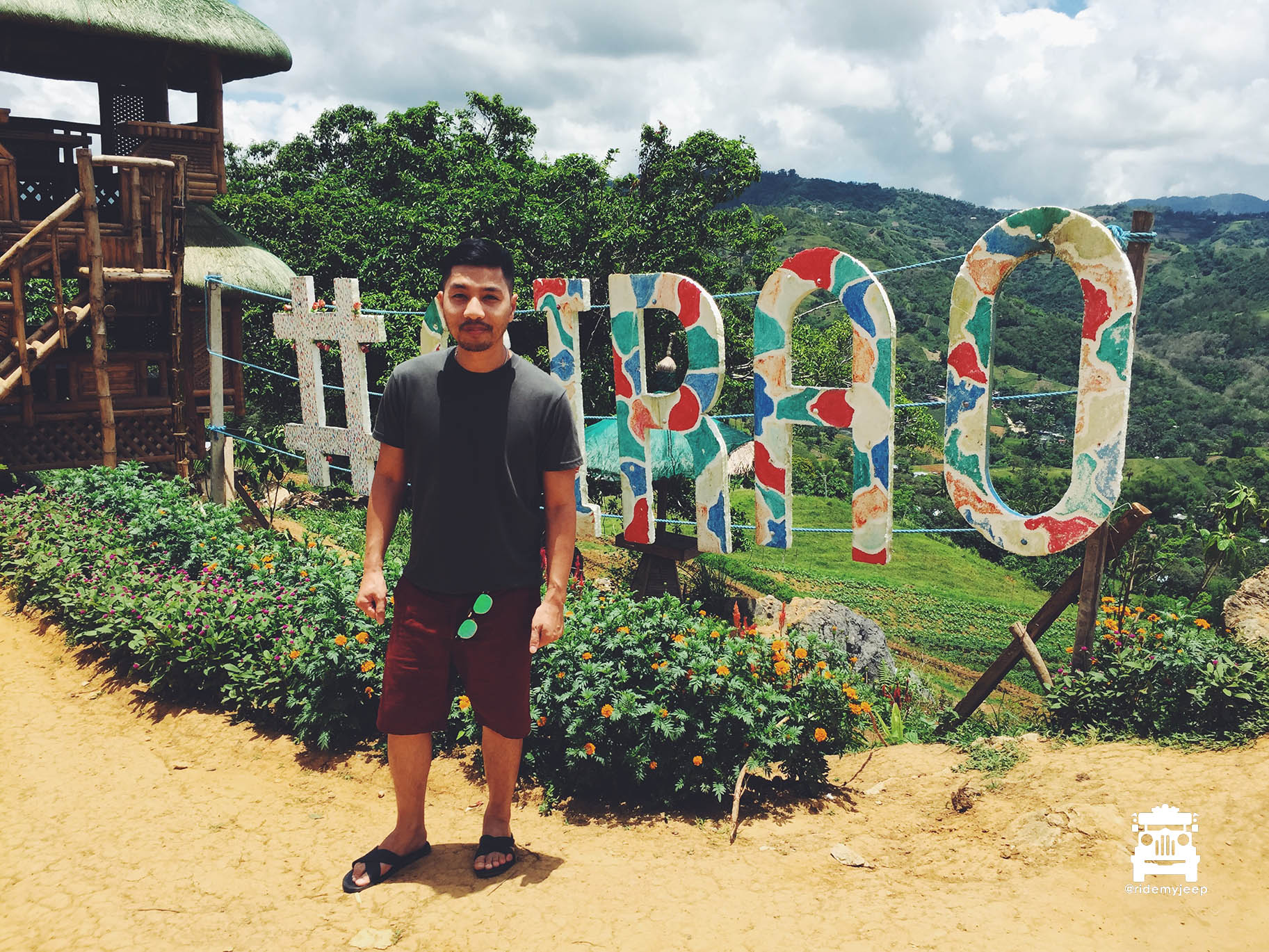 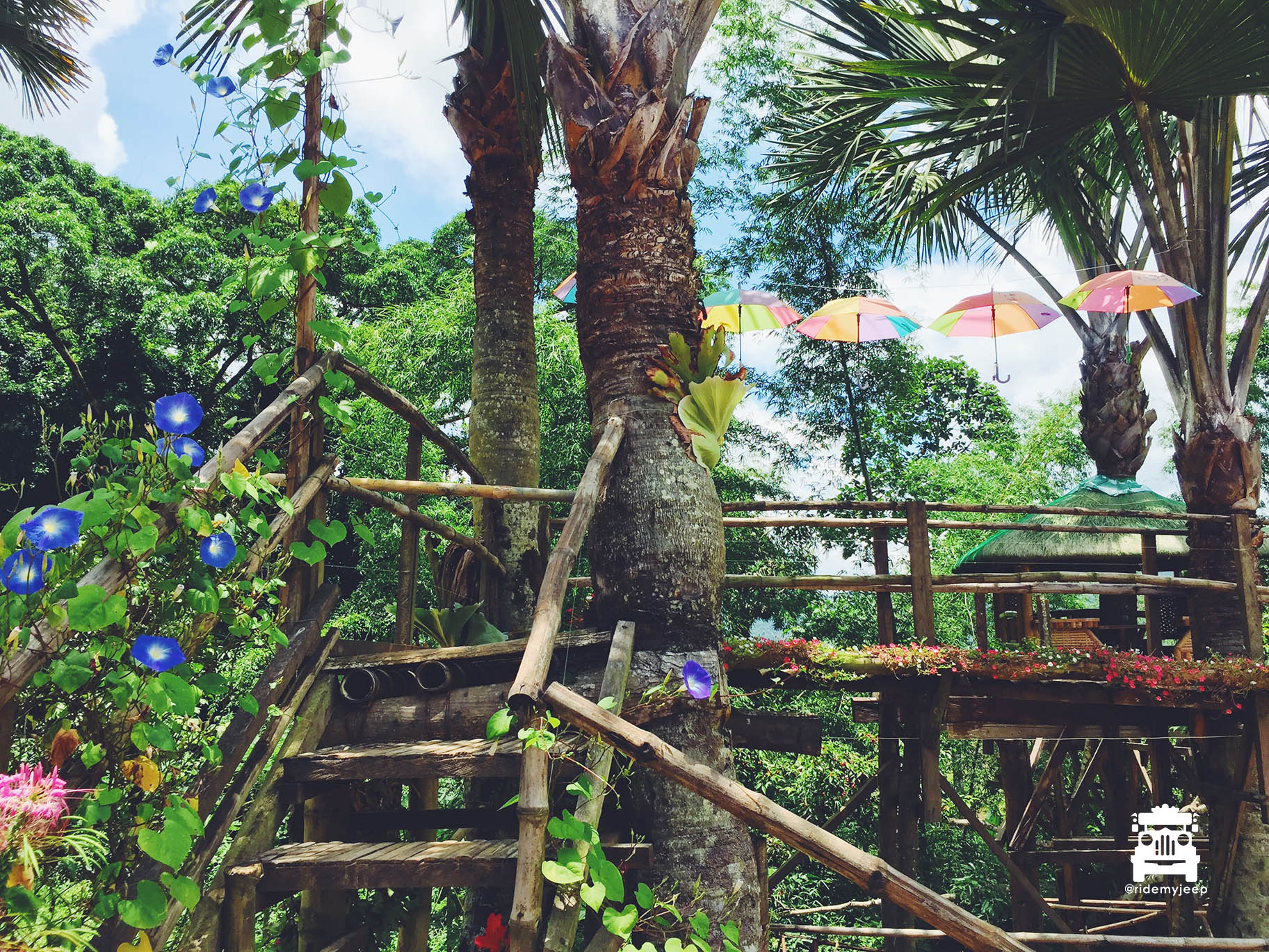 Outside the garden by the main entrance were lines of fruit stalls catching my mother-in-law’s attention. She ignored the green and yellow bananas on display and went straight for the guyabano (soursop), a hard-to-find fruit that would have been expensive if bought in the city. Wifey purchased some freshly steamed corn on the cob. 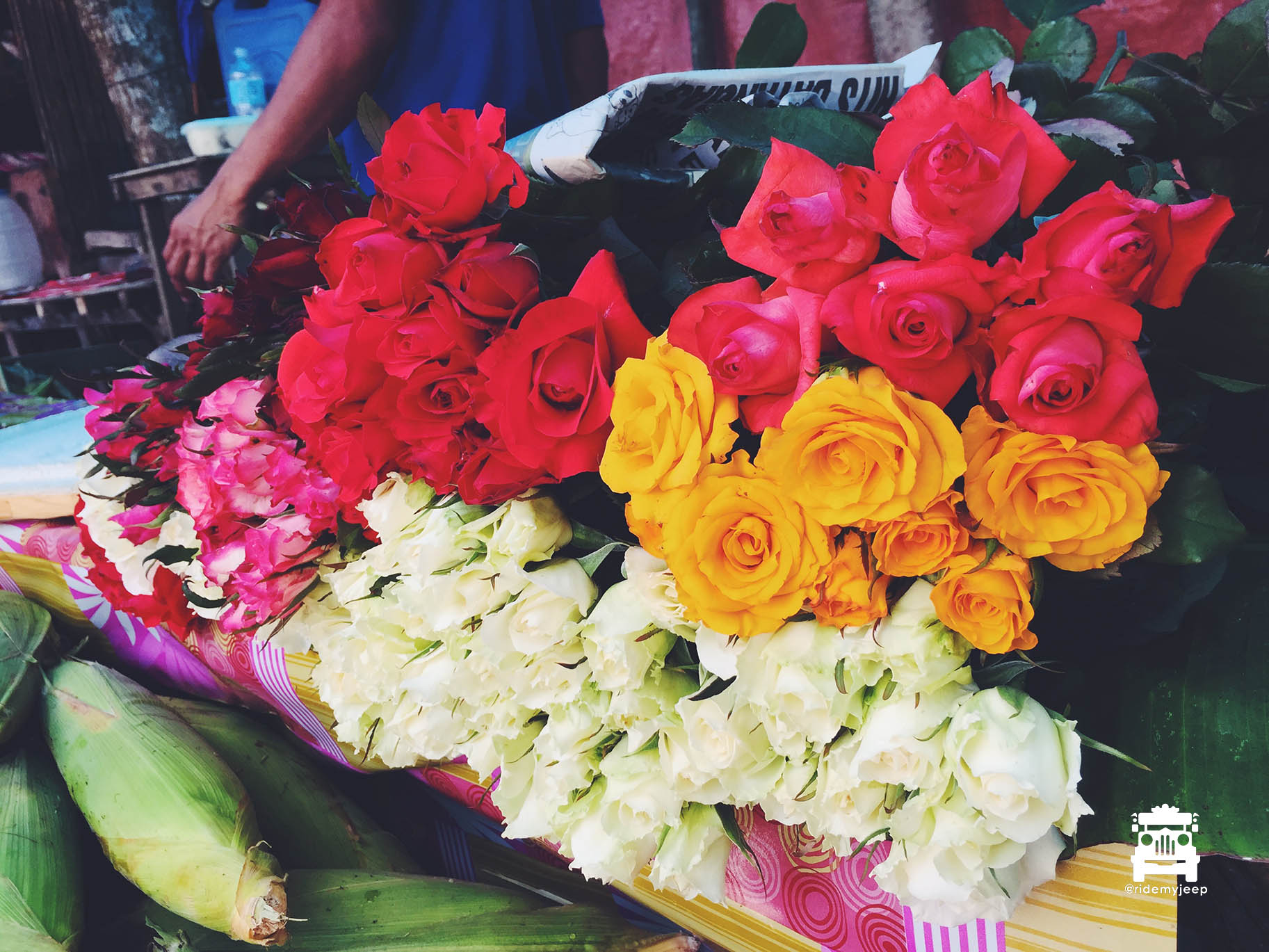 Twenty minutes from Sirao, the Temple of Leah sat atop a mountain side. The road to the entrance was quite steep and narrow. The sun was at its highest point when we arrived and so we decided to leave bub with Wifey’s mum in the car parked under the shade of trees on the side of the road. Entrance fee was P50 ($1.20 AUD) per person. As soon as we walked inside, you couldn’t help but think for a second that you were transported somewhere in Europe due to the Roman inspired architecture. The temple itself commanded your attention with its towering pillars and two golden lion statues standing guard by the stairs that lead to the entrance of the temple. It was obvious that the temple was still in construction due to existing scaffolding and unfinished parts which ironically gave it that aged, ruin look. A white stone unused fountain stood in the middle of the massive courtyard, three women embracing at the top while horses circled below. Breathtaking panoramic views of the island could be seen at every corner. Statues of maidens and angels littered the surrounding. Due to the intense summer heat amplified by the rock and concrete around us, we rushed our photo taking and went straight inside the temple. 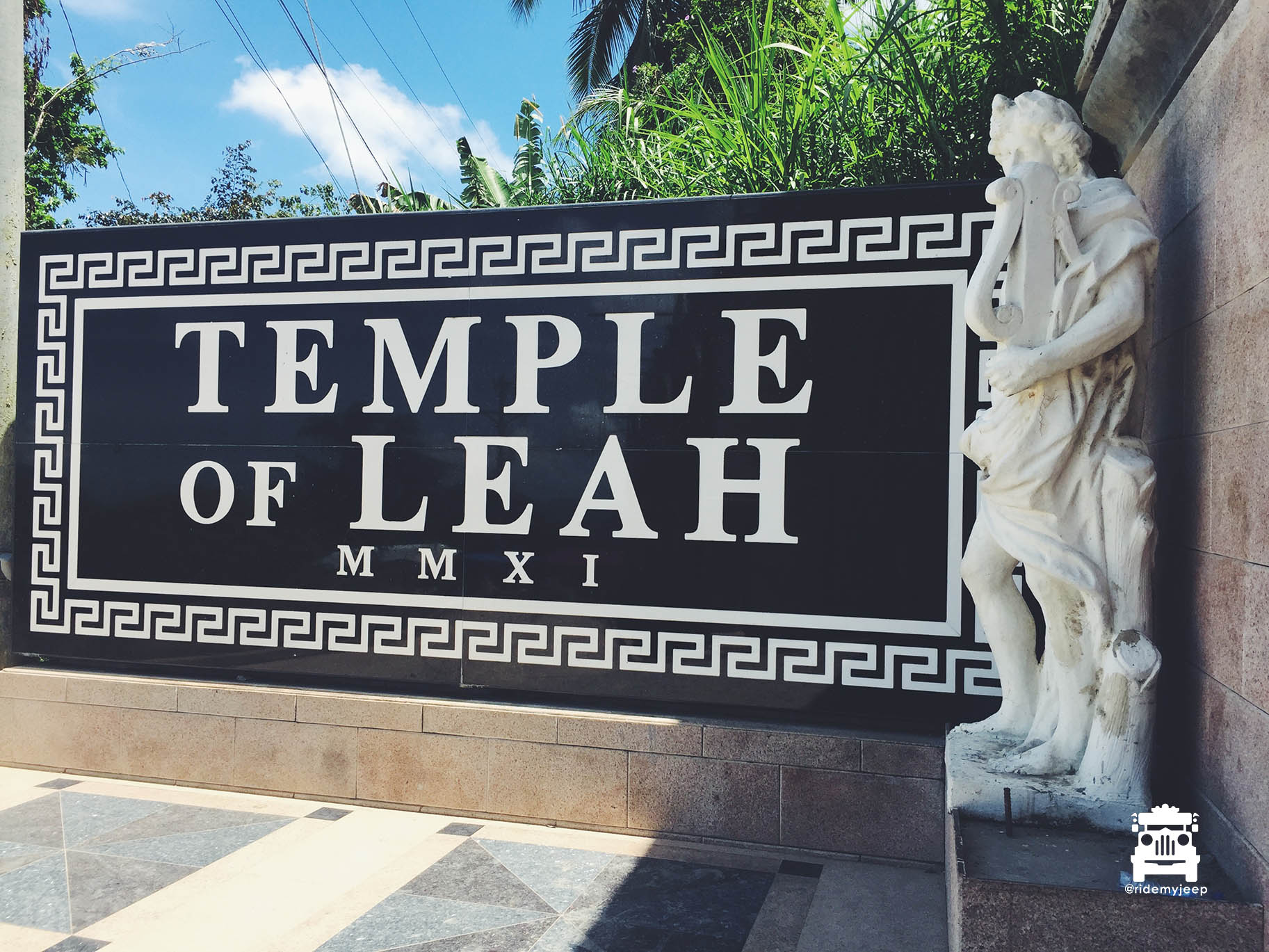 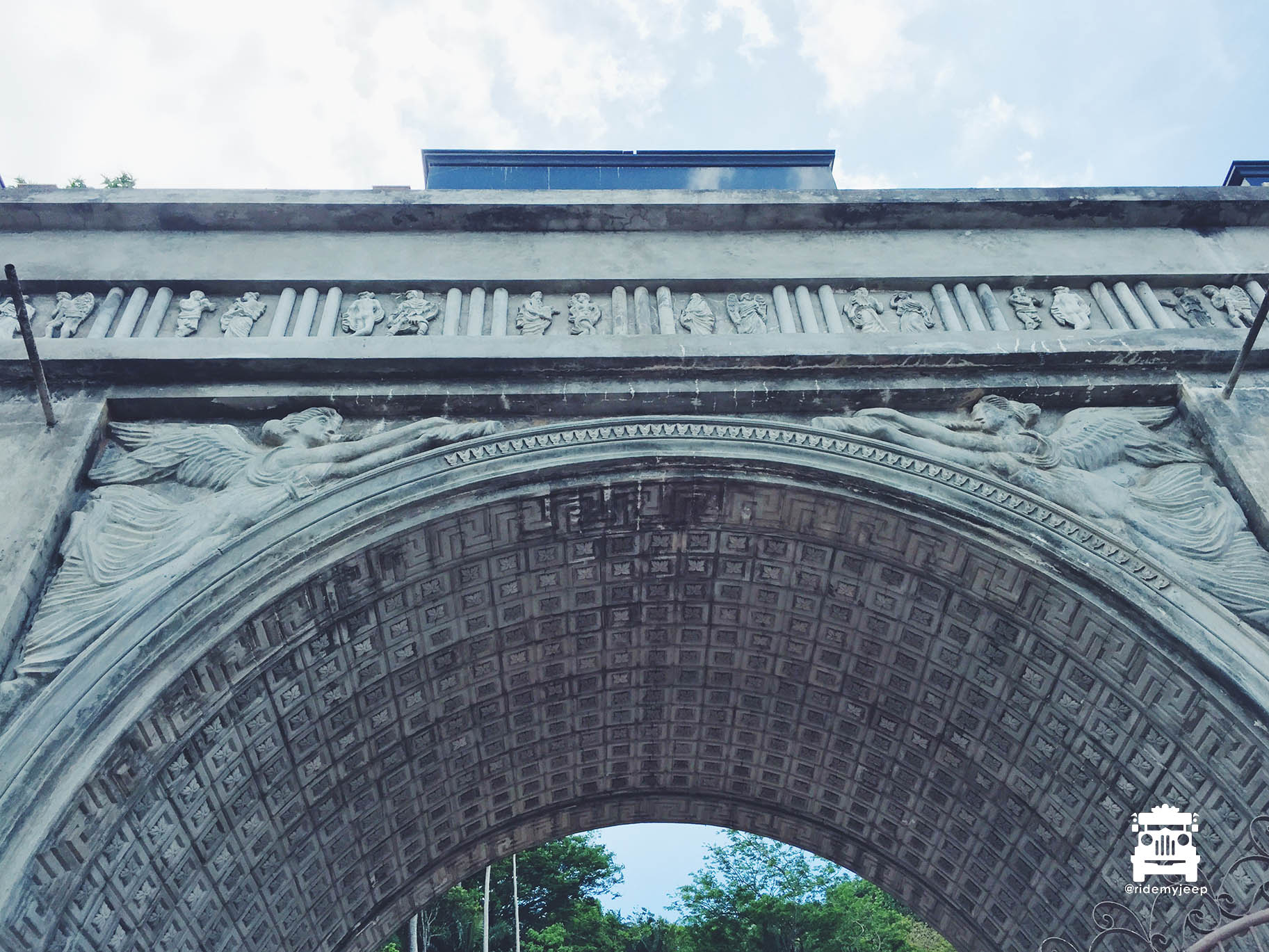 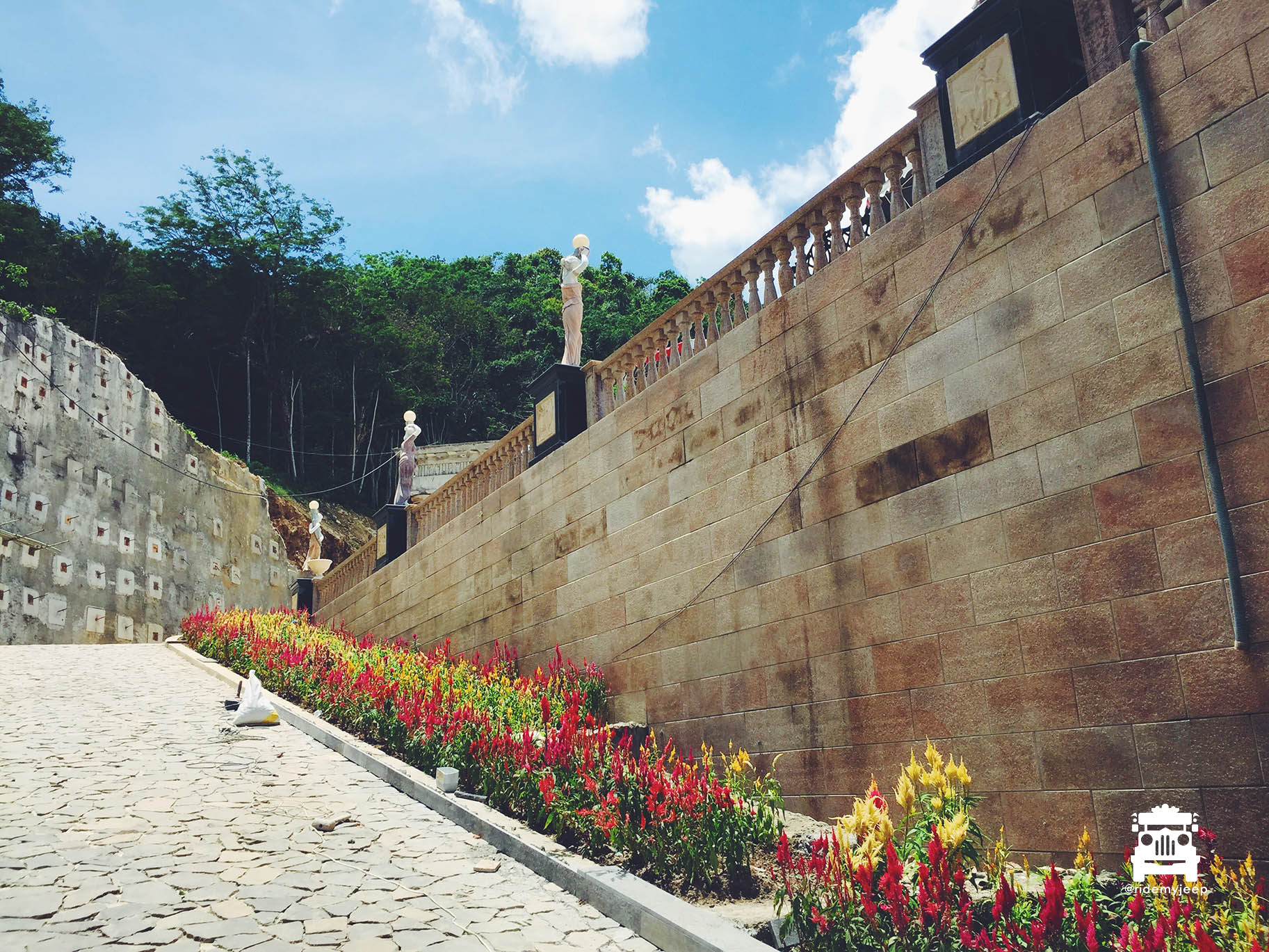 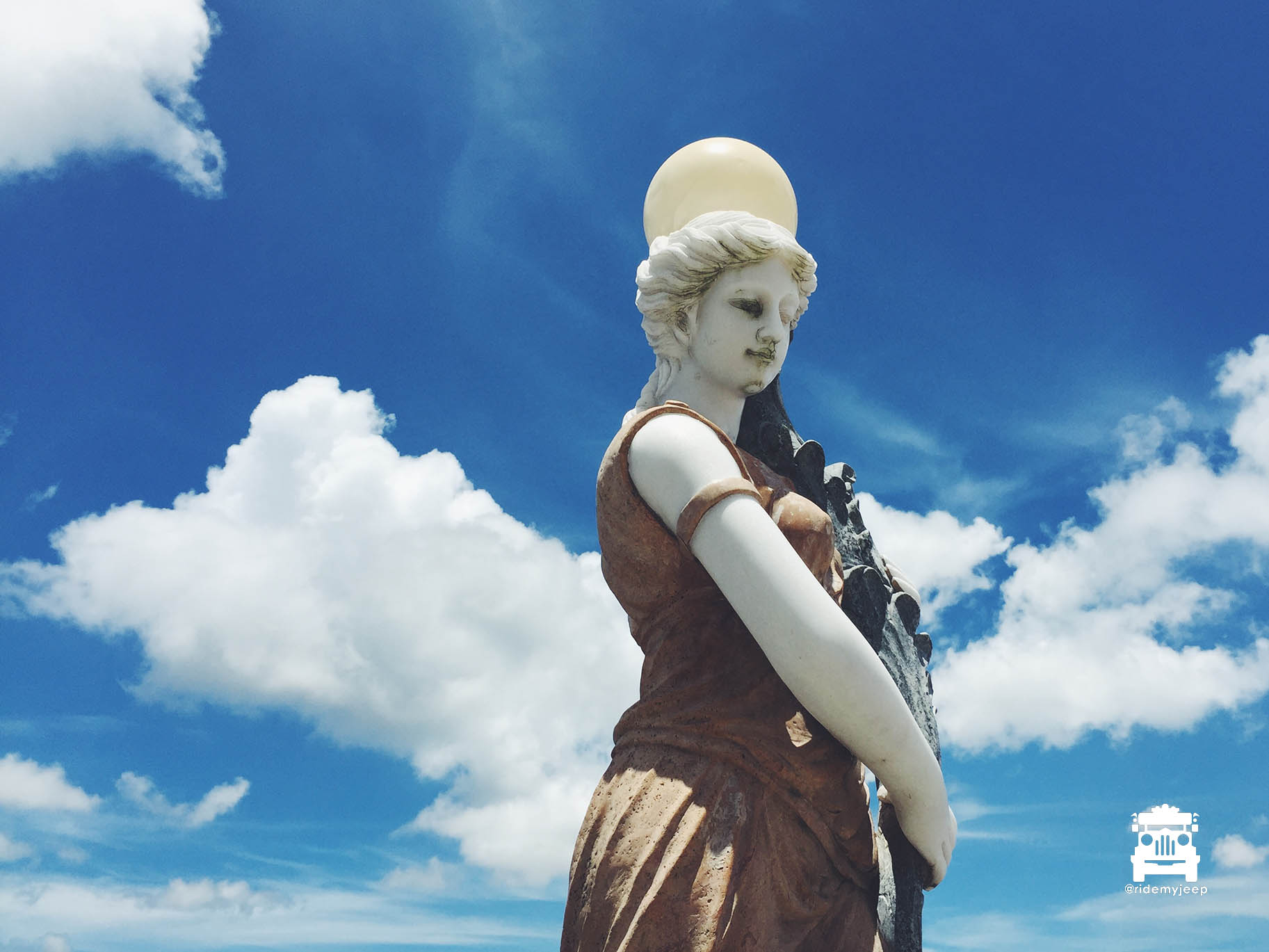 The 9 feet tall bronzed statue of Leah sat on a pedestal with an inscription dedicated by her husband who built the temple back in 2012 after she passed away from cancer. She sat regally on a throne with a smile on her face. Stained glass windows of angels framed the monument. After a few more pictures inside, it was time to go as hunger was calling. 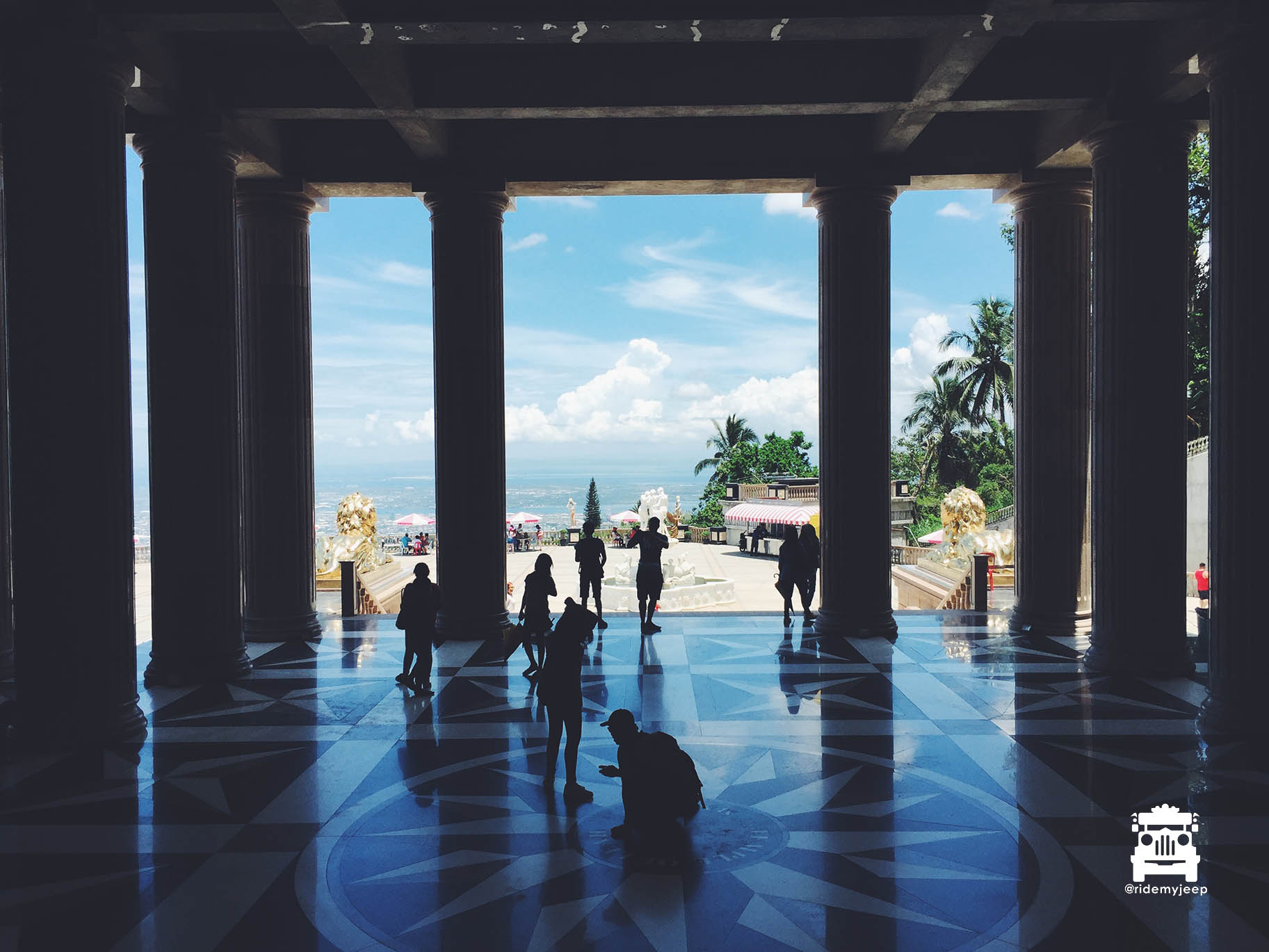